The canonization of John Lennon

The documentary LENNONYC showcases the late John Lennon's New York years and what his Dec. 8 assassination meant for his adopted city and fame at large 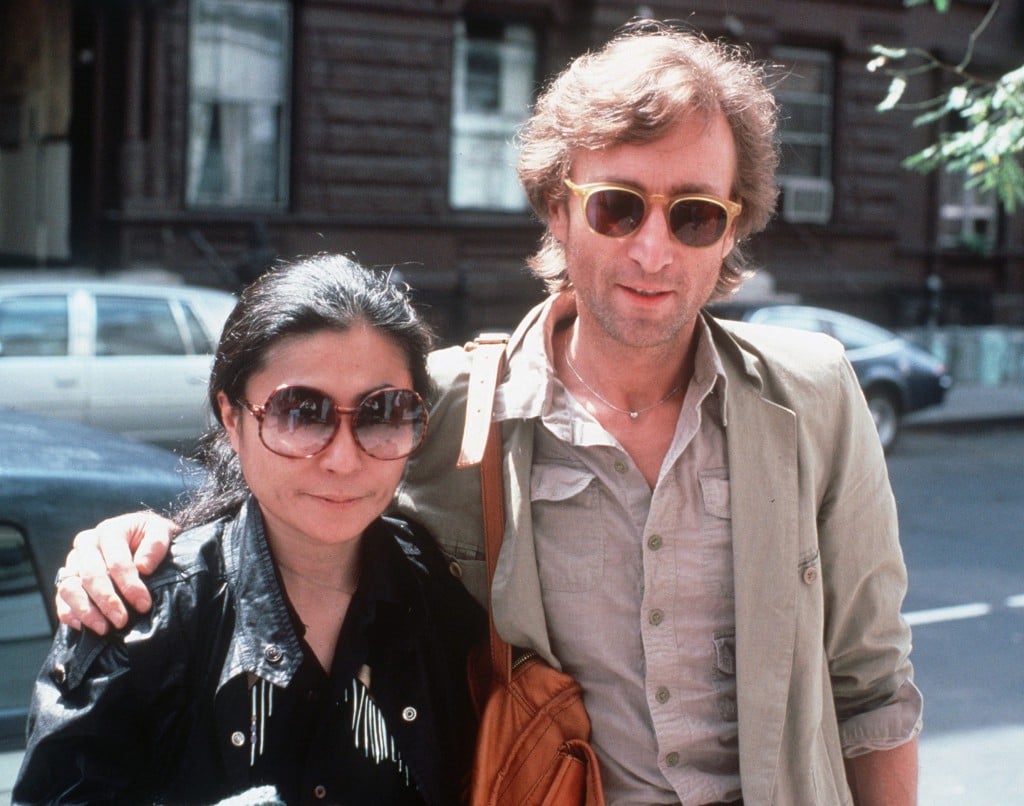 In this Aug. 22, 1980, file photo, John Lennon, right, and his wife, Yoko Ono, arrive at The Hit Factory, a recording studio in New York City. The death of Lennon, shot 35 years ago, still reverberates as a defining moment for a generation and for the music world. (AP Photo/Steve Sands, File)

Monday, Dec. 8, 1980. The last day in the life of John Lennon starts with a haircut, then a photo shoot for the cover of Rolling Stone. Annie Leibovitz, his upstairs neighbour at the Dakota, has him pose naked, curled around a clothed Yoko Ono. Outside, his born-again Christian killer, Mark David Chapman, waits on the sidewalk, the morning after spending his last night of freedom with a prostitute.

2:30 p.m. John and Yoko’s five-year-old son, Sean, appears with his nanny. “Oh, isn’t he a cute sweet boy,” says Chapman. The boy politely shakes his hand when it’s offered, the same hand that will soon cut down his father with a .38-calibre snub-nosed revolver—bought for $169 from a Japanese American whose surname happened to be Ono.

5 p.m. After a marathon radio interview, John and Yoko finally leave the Dakota and are stopped by Chapman, who asks Lennon to autograph a copy of his new album, Double Fantasy, handing him a black Bic pen. Lennon scrawls, “John Lennon 1980,” and as Yoko waits in the car, he lingers for a moment and asks, “Is that all you want?”

11 p.m. Coming home from a studio session after recording Yoko’s Walking on Thin Ice, the couple alights from their limo. Lennon makes brief eye contact as he passes Chapman, who starts to walk away, counts five steps, then spins into a combat stance. Five hollow-point bullets rip through Lennon’s body. One pierces his aorta. As the star lies dying on the steps of the Dakota, his killer is disarmed by a doorman. But he won’t give up his precious copy of Catcher in the Rye, which he feels will explain everything.

There had been other assassinations. America’s innocence had been shattered by a royal flush of ’60s martyrs—JFK, Malcolm X, Robert Kennedy, Martin Luther King, Jr. But the rock ’n’ roll casualties—Hendrix, Joplin, Morrison, Presley—tend to be self-inflicted. Never before had a pop star been slain by a fan.

Lennon’s death eclipsed Christmas, unleashing a flood of commemoration, and commerce, that has never really let up. Now, as we approach the 30th anniversary of his murder, two months after his 70th birthday (Oct. 9), the canonization of Saint John is coming to a head, with three new books, two movies, and an 11-CD Signature box set that looks like the White Album reconceived as a cube, containing remastered songs, outtakes, unreleased tracks, artwork—almost everything but his ashes.

But Lennon’s enduring significance goes beyond the blitz of merchandise. Aside from the two Bobs—Dylan and Marley—he was the only music icon of his generation to tackle politics and religion head-on, especially in the post-Beatles years. Swinging from incendiary protest (manifesto songs like Gimme Some Truth) to peacenik performance art (the proto-reality show of his bed-in with Yoko), he played the prophet, always a dangerous game. Like Dylan, he eventually tried to quit the saviour racket and leave the insanity of celebrity behind—“no longer riding on the merry-go-round,” as he sang in Watching the Wheels—but it wouldn’t leave him.

Lennon stood at a generational crossroads. His life ran the gamut, from yogis to Yoko, from Marx to Freud, from Yippie outrage to the primal scream, until he finally found peace in the unplugged pleasures of home. After Sean’s birth in 1975, Lennon spent five years of seclusion as a house-husband, raising a child and baking bread, creating the family he’d never had. What now seems like exemplary male behaviour was dismissed as a cop-out. When he re-emerged to record Double Fantasy with Yoko, he was clean and sober, “starting over,” and singing odes to domestic bliss. He was back on Boogie Street and re-energized with a new vision. “We’re involved in a kind of experiment,” he told the New York Times. “Could the family be the inspiration of art, instead of drinking or drugs or whatever? I’m interested in finding that out.”

His killer had other ideas. Chapman was like a cheap comic-book villain, a mutant fan deformed by some nuclear accident in the culture. He had never forgiven Lennon’s infamous aside, in 1966, that the Beatles were “more popular than Jesus.” Yet as he set out to punish his idol’s hubris, and poach his fame, he sealed John’s destiny as a Christ figure, a role he had tried to shake. In a 1980 Playboy interview, excoriating those who wanted to resurrect the Beatles, Lennon said: “Do we have to divide the fish and the loaves for the multitudes again? Do we have to get crucified again? Do we have to do the walking on water again because a whole pile of dummies didn’t see it the first time or didn’t believe it when they saw it?”

By the time John sang “the dream is over”—rejecting Jesus, Buddha, the Beatles and every idol and ism in sight—he was baring his soul with a raw transparency that seems miraculous in this age of PR-filtered celebrity spin.

Lennon’s death changed everything. His murder didn’t just mark the death rattle of the ’60s dream. It ushered in a new era of fan psychosis that would turn fame into an embattled fortress, and make martyrs of Princess Di and Michael Jackson. And New York would never be the same. The Dakota murder was a first heartbreak, a blow to the invincibility of a city that would be truly devastated by the attack on the Twin Towers. Lennon adored Manhattan. Having finally won a long battle against deportation, he felt safe there. “People come up and ask for autographs,” he said, “but they won’t bug you.”

The New York years are the focus of a revealing new documentary, LENNONYC, which premieres on PBS on Nov. 22, and arrives on DVD by Christmas. The film unearths fascinating glimpses of Lennon recording Double Fantasy, full of witty banter, along with candid home video. It also chronicles his ragged odyssey in the early ’70s as he fought deportation while fronting a protest band called Elephant’s Memory, whose members recall their amazement at being adopted by a Beatle. Their album, Some Time in New York City, featured ditties like Woman is the Nigger of the World—and John Sinclair, about a White Panther jailed for pot possession, who was freed the day after the song came out.

Lennon’s world came crashing down on Nov. 7, 1972, the night of president Richard Nixon’s re-election, when he had drunken sex with a stranger at a party hosted by Yippie leader Jerry Rubin. Yoko packed him off to Los Angeles like a truant child, where he staggered through a debauched exile that he would call his “lost weekend.” It lasted a year and a half. After he crawled back home, Yoko got pregnant at the unlikely age of 42, and gave birth to Sean on John’s 35th birthday.

Lennon’s devotion to Yoko seems inseparable from his epic search for a motherly love. The dramatic feature Nowhere Boy, a portrait of the artist as a young firebrand, portrays a bitter, abandoned teen. After the death of his Uncle George, who raised him with his Aunt Mimi, John rebels against her and reunites with his real mother, Julia, the free spirit who gave him up as a child—only to lose her again when Julia is struck and killed by a car. Lennon has submitted his Greek tragedy of a life to open-heart therapy in one song after another—“Mother, you had me but I never had you / I wanted you but you didn’t want me.” There’s more than a hint of Oedipal closure in his romance with Yoko, whom he called Mother. And in a weird case of life imitating art, Aaron Johnson, the 20-year-old who played him in Nowhere Boy, is now engaged to its 43-year-old director, Sam Taylor-Wood, who gave birth to his child in July. Like Yoko, she’s a conceptual artist, and posed as Yoko in a 1993 remake of the iconic Leibovitz photo.

Lennon’s final days in New York receive microscopic treatment in two books. Keith Elliot Greenberg’s December 8, 1980: The Day John Lennon Died unfolds as a minute-by-minute account of that day, and Ken Sharp’s Starting Over: the Making of John Lennon and Yoko Ono’s Double Fantasy presents a montage of interviews with everyone involved. The tape was running every moment Lennon was in the studio. So the traffic in relics is far from over.

Meanwhile, Yoko keeps the flame, along with Sean and his half-brother, Julian. Sean—who just released a new album full of childlike whimsy with his girlfriend, a 23-year-old model—says this about his father in a testimonial that’s part of the box set: “To this day, the only reason I play music is to know him.” Which brings to mind John’s most heartbreaking song on Double Fantasy, the bedtime ballad to Sean called Beautiful Boy: “Have no fear / The monster’s gone / He’s on the run and your daddy’s here?.?.?.?I can hardly wait / To see you come of age.” The monster, as it happened, was waiting just outside the door.

You have to wonder what might have become of Lennon had he outlived Michael Jackson, been offered a knighthood, and grown old to read about his inability to handle heroin in a bestselling feat of memory by Keith Richards—who, of all people, turned out to be rock’s most eloquent historian. One bizarre book timed to the Dakota anniversary is The 9 Lives of John Lennon by Frédéric Mars. It imagines Lennon surviving the shooting, reuniting the Beatles, leaving Yoko, solving the Middle East crisis and winning a posthumous Nobel Prize. You can hear him spinning in his grave—I’ve been dead 30 years and they still want me to get the band back together! In Instant Karma, Lennon sang, “we all shine on.” So does his music, and that’s all we need.