Canada's answer to David Attenborough believes that to understand the journey of the human race, you must take a walk—or underwater free dive—in its shoes 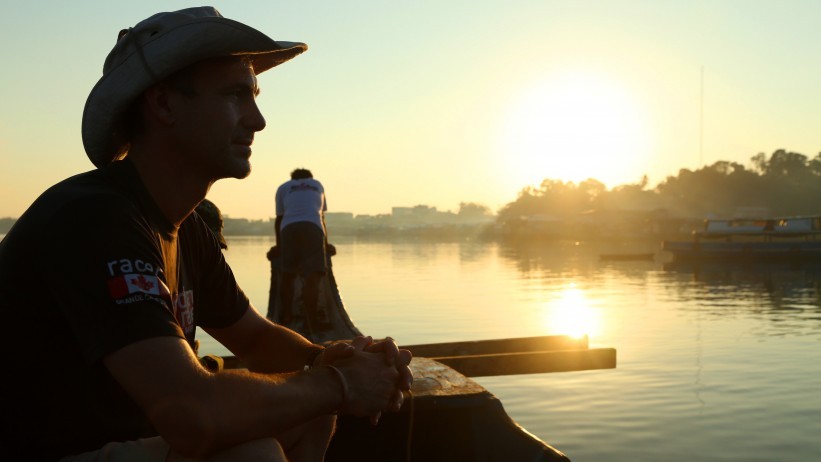 His face firmly underwater, Niobe Thompson was completely at ease as he held his breath. After the first minute, the decrease of oxygen in the lungs is normally a trigger to come up for air, but Thompson pressed on, knowing there was still oxygen in his blood. As he stayed submerged, carbon dioxide started to build up in his system. Pretty soon, the diaphragm began to spasm, but that’s just a reflex. Thompson continued to hold his breath.

Now four minutes underwater, he felt even more relaxed. It was calming, almost meditative. He started to think this was easy. “I was quite giddy for the last moment,” Thompson says. “That was a sign that I was really losing it.” Finally, after approximately five minutes, Thompson lifted his head to suck in the air above the waters of Calgary’s Adventure in Scuba training facility. His time was a personal best.

“He would push through to his limits,” says Kevin Sorensen, a competitive freedriver from Lethbridge, and Thompson’s teacher. “It was clear he was there for a purpose.” That purpose is not for bragging rights, though; it’s for science.

Niobe Thompson is an anthropologist and filmmaker by profession, though calling him human guinea pig wouldn’t be entirely incorrect. For his upcoming documentary, The Great Human Odyssey (an ambitious three-part miniseries on CBC’s The Nature of Things debuting Feb. 12), Thompson wanted to know how humans went from near extinction ages ago, to now populating every single corner of the planet.

“Our population was bottlenecked to possibly as few as 600 individuals,” he says. “It was likely due to a super-drought that made most of Africa inhabitable.” Our species was looking for refuge, and it appears one was found on the coasts on South Africa. Access to marine resources may not only have saved our ancestors but also helped develop our brains during evolution. “There’s quite a bit of evidence that finally having access to the food resources in a coastal region may have been part of that basket of necessities,” he adds. That includes certain kinds of shellfish where one had to go five or 10 metres deep into the water to retrieve. And that means someone had to be a diver.

Which leads us back to the shallow end of a pool in Calgary. Thompson was learning to breath-hold dive from Sorensen, so he could one day swim underwater for minutes at a time with the last known free­diving culture on earth—the Bajau—found in the south Philippines.

Thompson knows it would have been easier—not to mention safer—to simply put on some scuba gear with a camera and follow the free­divers underwater worry-free (that is, if he also ignores the constant threat of armed conflict in the surrounding regions). Instead, Thompson wants to be the bridge from the viewer to the subject—a human face that takes them on a journey of discovery. “For me to breath-hold dive with the Bajau, it’s part of making a scientific point: this is in all of us,” he says. “We’re all descendant from this tiny group of survivors in Africa.” 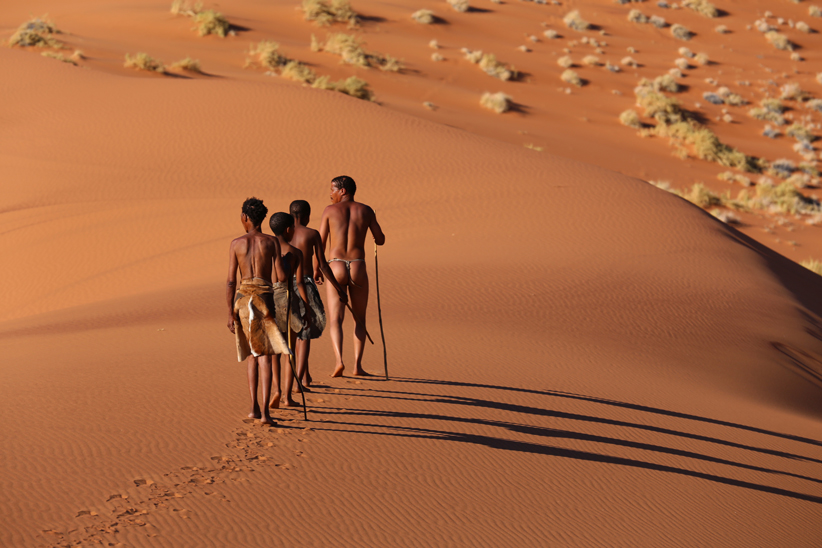 A megadrought in Africa 190,000 years ago reduced our species to only a few thousand individuals. (Human Miracle Productions Inc)

His fascination with the world beyond began early. Growing up in Wabasca, Alta., Thompson was the only white kid in the Cree community, where his father worked as a wood canvas canoe builder. The family later relocated to Edmonton, and after high school, Thompson bought a one-way ticket to Mumbai, India, and slowly made his way westbound toward Europe.

On his travels, he found that most people on a similar journey already had university educations, so when he arrived at a telephone exchange in Istanbul, Turkey, he registered by phone for Russian studies courses at the University of Alberta. Why Russian? “The honest truth is I couldn’t get into any other language classes when I registered that late,” he laughs. “It was the only one left.”

He finished his undergrad at McGill, working summers as a Rapattack forest firefighter in Alberta, before continuing in Russian studies for his masters at University London College. He was then hired by the Commonwealth Human Rights Initiative to work on reports for issues such as weapons smuggling in Africa, which included his own field research in Sierra Leone in 2000.

His hands-on approach served him well as he transitioned into social anthropology for his Ph.D. at Cambridge University. To research the changing landscape of Chukotka, located in the remote Russian north, he lived for more than a year in a region where there was no infrastructure, everything was expensive and no one spoke English. “I wanted to spend time in the only place Lonely Planet didn’t write about in its books,” he says.

Recently married, he and his wife, Linda Rosenstrøm Chang, who also studied anthropology, considered living apart for a time. But newlyweds should be together, they figured. So she moved to Chukotka too, “staying in this crumbling town, and it’s minus 30, and everyone’s bundled up, and you don’t understand what anyone is saying to you, and there are no supermarkets,” she recalls. “It was really lonely for a long time.” But they were together on an adventure where Thompson studied the area and its people.

The two returned to Edmonton, where Thompson could have gone into academia, but his love of movies called for a career transition into documentary filmmaking. The following year, he co-founded Clearwater Documentary with filmmaker Tom Radford and the two got to work with their independent production company. Thompson has since produced films about the oil sands (Tipping Point), tracing the origins of the modern Inuit (Inuit Odyssey), the Ice Age migrations (Code Breakers), and long-distance running (The Perfect Runner).

The Great Human Odyssey could well be his most impressive work yet. Filmed in 4K resolution over the course of 18 months across five continents—from the freezing landscapes of Russia to the water worlds of the Southeast Asia—it’s a spectacular-looking film. Thompson went a step further by asking the Edmonton Symphony Orchestra to provide the score.

Niobe Thompson doesn’t want to be only a third-person narrator. When possible, he wants to experience what his subjects do. For 2012’s The Perfect Runner, Thompson took up barefoot running to experience first-hand endurance running and its role in the evolution of modern humans. “Once he went running barefoot at Harvard with a professor who does barefoot running,” Chang remembers. “That wasn’t so smart because he was running on the concrete on a really hot day and he basically lost his heels. The skin just came off.”

But neither she nor their two daughters get too worried about the breath-hold diving or whatever challenge Thompson signs himself up for next. “I know he does all these extreme things,” Linda says. “He’s very sensible.”

Even if that means going to a dangerous area in Southeast Asia and diving 20 m underwater for a couple of minutes without any scuba gear whatsoever—for the sake of a documentary.