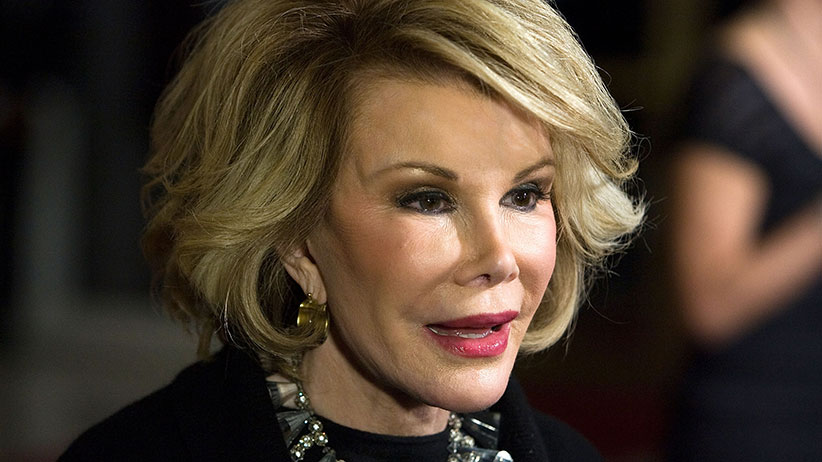 Many may remember Joan Rivers for her acerbic red-carpet commentary and for the dim, cruel cracks about her surgery-enhanced appearance, but few know that she was a true pioneer in her field. Take a look back at her life through these major moments:

1. JOHNNY CARSON AND JOAN RIVERS ON THE SAMMY DAVIS SHOW, 1966

Joan Rivers is closely linked to the career of Tonight Show host Johnny Carson; after all, the former late-night show king was the one who hired her as a writer in 1983 and mentored her career, and he would eventually leave the keys to the host’s table to her when he needed a day off. But their first time on TV together wasn’t on his show but rather on Sammy Davis Jr.’s. His introduction shows exactly what made her a comedian who was as funny as she was important: “Here’s a woman who not only writes funny, but is funny herself.”

By the ’70s, Rivers was at the height of her powers. She was the narrator of the popular (and still kind of awesome) The Adventures of Letterman series, a cartoon about a villain whose low-stakes evil plans involved replacing letters in words to make them worse (pear to bear, pickle to tickle) until the inevitable intervention of Letterman. From 1968-69, she hosted a daytime talk show that lasted one season, That Show with Joan Rivers, with Carson as the show’s first guest, of course. Most importantly, she was a woman doing stand-up on national stages—from broadcast TV to Carnegie Hall—when women were largely not doing stand-up at all.

It’s hard, today, to get a sense of just how thrillingly popular Rivers was in the ’80s. But the unyielding and the genuine gratitude on Rivers’s face on the first episode of her namesake late-night show reflects just how big a star—and how beloved—she was, especially with the debut of The Late Show Starring Joan Rivers, making her the first woman to have her own late-night talk show. Unfortunately, the show may have been her career’s zenith; sagging ratings forced the Fox network to fire her and her husband, who had been the producer. Three months later, her husband took his own life. “They humiliated him,” she told People three years later. To top it all off, Johnny Carson cut her off completely for not consulting with her about her own show first. They would never speak again.

Her trademark line was always “Can we talk,” an ironic catchphrase for someone who spoke at breakneck speeds, sometimes over the guests. But as she returned to daytime, audiences were reminded of how good she was when Rivers won a Daytime Emmy for best talk-show host. Her style during the time was perhaps best exemplified by this interview with the comedy-thrash-metal group Gwar, then a violent bacchanalia for shows to skewer or to protest in the heat of a Tipper Gore-powered puritanical atmosphere in the U.S. Rivers, instead, had the band on her show, and despite some early bafflement, the segment is frankly timeless—and most importantly, the nearly 60-year-old comedian got the joke, making her, once again, ahead of her time.

The thing that made Joan Rivers special was that she was always self-aware (even about her controversial surgery-buoyed appearance: she joked that when she died, she’d donate her body to Tupperware; heck, the excellent documentary about her was named A Piece of Work.) It’s also what made her appearance on the critically acclaimed Louie so fantastic. In what has become one of the series’s most memorable scenes, Rivers speaks rawly about her love for stand-up as Louis CK’s character doubts his own career as he plays at a casino. “I wish I could tell you it gets better, but it doesn’t get better. You get better. You think it’s been easy? I’ve gone up, I’ve gone down, I’ve gone bankrupt, I’ve gone broke. But you do it, and you do it because we love it more than anything else. … Sounds so stupid—what we do is a calling, my dear. We make people happy. It’s a calling.” Then they sleep together.

Rivers would never speak to Carson again after their falling-out; she wrote that she tried to reach out, but he hung up on her twice. So it was a big moment when Jimmy Fallon, in his first episode in the host’s chair, brought her back to mend historic wounds, ending the longstanding Carson diktat—upheld by Leno and O’Brien—to ban her from the show. True to form, she returned with her trademark devil-may-care caustic stylings. “It’s very special to be coming back, very very special,” she said, pausing as the audience applauds. And in the next sentence: “So my girlfriend and I decided we were going to get matching vagina rings.”