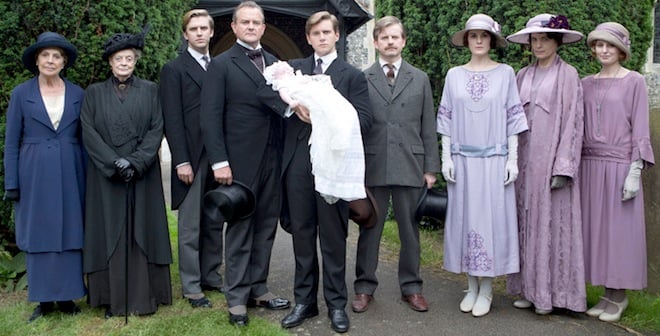 Lord Julian Fellowes says he had no choice but to off a favourite character on Downton Abbey.

The writer behind the popular series says it was the only credible exit for the character played by an actor who wanted to leave.

“We would have loved to keep him,” Fellowes said. “We didn’t really have any option.”

The departing actor told the Daily Telegraph he desired freedom and it was time to move on:

“It felt like a good time to take stock, to take a moment. From a personal point of view, I wanted a chance to do other things. It is a very monopolizing job. So there is a strange sense of liberation at the same time as great sadness because I am very, very fond of the show and always will be.”

Fellowes said the star will be missed. “I’m pretty sure he’s got a terrific future.” He added that there will be no “miraculous Dallas-style re-appearance” of the character.

Meanwhile, in other D.A. news, Dame Maggie Smith told 60 Minutes she has never watched the show in which she stars. “Because it’s frustrating,” she explained. “I always see things that I would like to do differently and think, ‘Oh, why in the name of God did I do that?’”

Here’s how Tweeps responded to the season ender: