Critics are split on Wajdi Mouawad's recasting of Mozart's The Abduction. Can modern playwrights rewrite the classics for the 21st century? 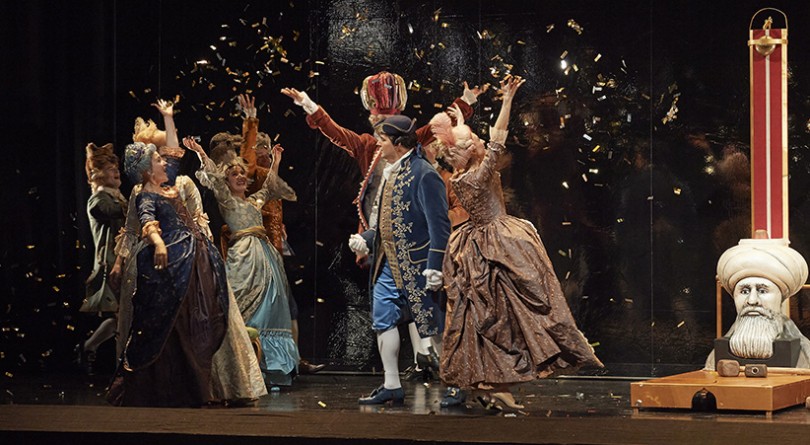 Mauro Peter as Belmonte (centre) in the Canadian Opera Company’s new production of The Abduction from the Seraglio, 2018. (Michael Cooper)

There’s a remark often attributed to Wolfgang Amadeus Mozart: “I pay no attention whatever to anybody’s praise or blame. I simply follow my own feelings.” Apocryphal though the quote may be, one wonders whether the composer would have recognized the Canadian Opera Company’s recent production of Mozart’s The Abduction from the Seraglio—in which the director heavily edited the text of the 1782 opera to address “casual racism”—as a product of similar artistic licence.

Many lauded the COC’s latest iteration for finding new meaning in the popular, yet problematic, script. Others loathed the addition of 30 minutes of didactic dialogue, while decrying the basic transgression of messing with the libretto of one of Mozart’s most beloved pieces. And while some gave the performance a standing ovation on opening night, “there were people behind me that booed,” says Joseph So, an editor at Opera Canada and professor emeritus of anthropology at Trent University. “You hardly ever hear people boo in Toronto.”

Far from the opera houses of Mozart’s native Austria, the Canadian Opera Company has thus landed itself in the centre of a debate over how a national opera company should or should not treat 18th-century music that might not square with 21st-century values.

The plot to The Abduction is straightforward: two European women, Konstanze and the maidservant Blonde, are kidnapped and subsequently sold to a Turkish Muslim, Pasha Selim, who instead of forcing himself—or a marriage—upon Konstanze, tries to legitimately win her love. Meanwhile, the ladies’ fiancés are cooking up a scheme to kidnap their women back. Sounds serious? Mozart actually wrote it as a comedy.

Fast-forward almost 250 years, though, and Lebanese-Canadian writer and director Wajdi Mouawad, in revising the script, has taken out the funny for something he hopes will dare the audience to pause and think. “It is not difficult to see that an 18th-century comedy about European women kidnapped by Turkish Muslims might appear, in 2018, as an exercise in caricature, or casual racism,” Mouawad wrote in his director’s note on the program (the opera company said Mouawad was unavailable for an interview, citing his hectic schedule). “Even more brutally, it could constitute an argument for the wholesale rejection of Islam and the East, thereby falling into larger patterns of Islamophobia in the West which would have us blame all our problems on the threat of an undifferentiated ‘Arabic’ Other.”

Mouawad’s remedy for these concerns involved new scenes made up entirely by him, not Mozart. The production opens, for example, with the Europeans at a welcome-home party, where the once-kidnapped women scold their fiancés for failing to recognize goodness in their former captors. The revised story is thus rewritten as a flashback of the characters’ time in Turkey, which allows the parties to explain how they perceived events in the aftermath of their kidnapping, and illustrate how European men might not be entirely enlightened toward women either. Act 2, meanwhile, opens with the Muslim call to prayer—another Mouawad revision—where the escape plan is explained.

Reviews were mixed, to say the least. The Globe and Mail said the new production “confidently sacrifices moments of comedy for a focused commentary on xenophobia, double standards between men and women, and what it means to be held captive.” The Toronto Star, however, in its one-star review, wrote: “The real victim of the abduction in the Canadian Opera Company’s latest effort … was any compelling reason to sit through to the bitter end.” In fact, the extra 30 minutes’ worth of new dialogue in an opera that in its original form was nearly three hours long was reason enough for some attendees to head for the exits during the intermission.

“When a national opera company presents an opera by an artist like Mozart,” says Giuliani Dal Piaz, a Toronto-based opera critic for Italian and Spanish publications, “I don’t think it’s right to [change the libretto]. Are we going to change the literature, poetry and music of the last 10 centuries because in those times the text was acceptable and now it’s not? Would you change in a prose theatre the words of Shakespeare? Or the words by Chekhov?”

Joseph So disagrees. The first time he saw The Abduction some 40 years ago, he laughed along with the rest of the audience. “I probably didn’t consciously think of the piece as racist, sexist and xenophobic,” he explains. But as the decades went by and he saw the opera several more times, he found himself laughing less and less. Even if the Pasha Selim does not force himself upon Konstanze, and truly wants to win her love, “the truth is these two women are there against their will,” So says. “There’s nothing funny about that storyline. It’s certainly not funny in 2018.”

So says he isn’t blaming Mozart; the composer was merely a product of his time. Nonetheless, he says, “this opera can no longer be presented the old way, given the 21st-century sensibilities.” How would Mozart feel about that?