1. OF CLONES AND CANADA

“Wickedly smart.” “Satisfyingly dense.” An “audacious, awesome concept.” These are not necessarily what you’d expect out of the early reviews for The Lego Movie, a film that is surprising critics and audiences who weren’t clear why this was such a big deal, since there had been many forgettable straight-to-home-video Lego films and video games in the past. But since we can hardly help but crow whenever our country plays a role in a mainstream, international hit–and since this is Olympic season, too, when patriotic crowing becomes a national pastime–we should acknowledge our own connection, which is that there’s a reasonable shot that the film’s creators wouldn’t be involved with the project if not for the excellent and tragically short-lived TV series Clone High. 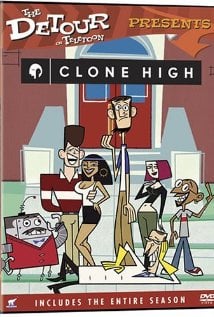 Yes, it was only on TV for but 13 glorious, weepingly hilarious episodes in 2002, a series that found a military complex cloning historical figures like Abe Lincoln, JFK, Cleopatra, Joan of Arc and Gandhi, only to bring them back as teenagers all attending school together, providing send-ups of history and Dawson’s Creek-style hokum. But it was with Clone High that Lego Movie directors Phil Lord and Christopher Miller (plus Bill Lawrence, who went onto become the creator/showrunner for such hit series as Scrubs, Cougar Town, Spin City and a writer on many more) honed their affectionate, absurdist-joke-per-second style. If you watch the series today–and if you haven’t, forget six ways to Sunday, this is the one thing you should do today–it hasn’t aged one bit, because it’s riotous, quotable, affable, charming, creative, fantastic. All the adjectives that just so happen to be associated with the surprise hit that is The Lego Movie.

But what’s Canada’s role in this? Well, even though it was made in the U.S., it aired on our very own Teletoon channel first, and where it never even received a full season’s order in the States (only eight ever aired there), we got all 13 episodes up here, for we are truer, and norther, and stronger, and freer. It owed itself so much to our country that one particular episode centred heavily around Canada, sending it up as a Miami-style hotspot featuring endless Spring Break beachfront parties thrown by Ashley Angel of O-Town “fame.”

So you’re welcome, world, for helping The Lego Movie into existence. And unless you want me to raise my palms in the air and cry, it’s time for TV execs to think about a second season, please and thank you.

Presented without comment, and to encourage dialogue: After the New York Times’s Nicholas Kristof published an open letter by Dylan Farrow in which she repeated, in frank and painful terms, her claims that she was molested by her adoptive father, Woody Allen, the famously tight-lipped filmmaker has responded for what he says is the final time, blaming Mia Farrow’s “indoctrination” for what’s transpired:

I did not molest Dylan. I loved her and hope one day she will grasp how she has been cheated out of having a loving father and exploited by a mother more interested in her own festering anger than her daughter’s well-being.

Dylan responded to this missive, too:

Once again, Woody Allen is attacking me and my family in an effort to discredit and silence me – but nothing he says or writes can change the truth. For 20 years, I have never wavered in describing what he did to me. I will carry the memories of surviving these experiences for the rest of my life.

In short, this issue isn’t likely to go away, any time soon.

3. LONGFORM OF THE WEEK

For those who avidly use Twitter, it was a day that changed everything. On September 24, it was revealed that oddball Twitter spam-bot-cum-profundity-provider @horse_ebooks wasn’t in fact a fortuitous confluence of nonsense and poetry but rather an art project by Buzzfeed’s creative director and a tech consultant. New Yorker writer Susan Orlean was involved, and after outing it in September, she wrote a piece in that venerable magazine about the history of the brains within that Trojan horse and what it says about our relationship to our machines. It talks about Twitter’s fascination with it and commitment to finding out who was behind what was called “the Internet’s favourite spam bot” (a creator says conspiracy theorists suggested it was Edward Snowden or a Syrian operative behind it) and how when it was revealed it all led up to a video art project called “Bear Stearns Bravo,” with a tweet listing a phone number, that phone number received 400 calls in 20 minutes.

The New Yorker story is here, although behind its paywall.

Hate or love him, it’s hard to deny that Kanye West is as creative a force as there is in music, and his trajectory from backpack-wearing, self-aware rapper who tied together the then-disparate realms of “mainstream” and “conscious” rap (yes, it all used to be so easy, it was a much simpler time then) to death-metal-appropriating, screeching, God-comparing auteur is all the more remarkable when you consider that he’s been doing it for 10 years. Listening to College Dropout, then, is a remarkable trip down memory lane, if for nothing else than to realize how much West has changed and subsumed himself within the hip-hop landscape. But it should also to listen to his still-fresh soul-drenched samples, his earnest, contradiction-culling, still-awkward lyricism, and the easily forgotten classic track that is Spaceship. SPIN Magazine produced an incredible track-by-track breakdown of that album, too, that is mandatory reading this weekend for music buffs: “The visionary producer — and incredibly clever and charmingly clunky MC — seemed to get a sick thrill out of pairing, say, Mos Def with Freeway. (Because they sounded great together, but also because they secretly weren’t all that different.)” So put on some coffee, put on College Dropout, and ignore the fact that somehow it’s been 10 years.

Here’s some show-don’t-tell storytelling at its finest. Much has been made about Sochi’s terrifying Rosa Khutor downhill piste, lambasted as possibly murderous by US skiier Bode Miller and in fact nearly killed his teammate Marco Sullivan. But to get a real sense of just how scary it is, and just how much speed you pick up, BBC sent former Olympic skier Graham Bell down the slope with a camera, and if you don’t get a little nervous watching it, these Winter Olympics probably don’t do anything for you at all.

Here’s our self-promoting post of the day: As part of our excellent and ongoing Sochi coverage, I check in with Jonathan Gatehouse from Sochi and pester him to give us a bold medal prediction, plus a preview of the week to come and how #SochiProblems fit into the context of Olympics past.