Six Ways to Sunday: In defense of Drizzy 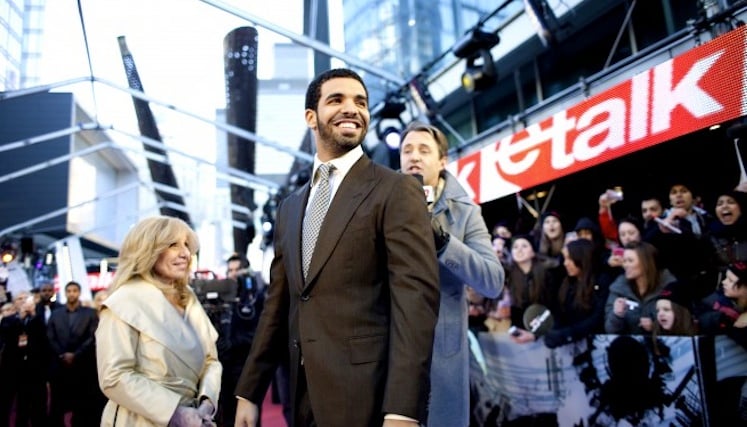 1. NOTHING WAS THE SAME
Just when the strangers and the haters thought it was safe to come around to the rapper Drake–coming off a charming SNL hosting job and another critically acclaimed record, the Toronto MC kicked up an online fuss about his interview and ensuing profile by Rolling Stone, excoriating the “media” as a whole for replacing the cover he was promised: 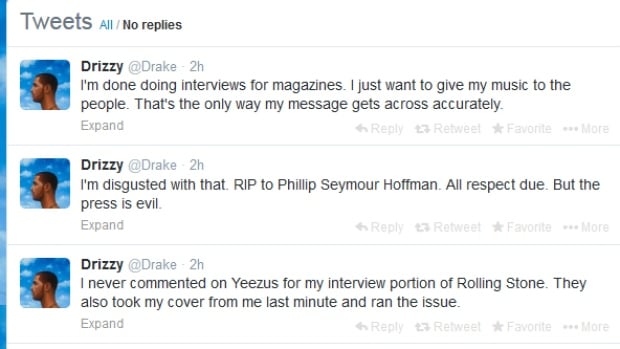 Unsurprisingly, he took heat on Twitter for his perceived insensitivity to the passing of Philip Seymour Hoffman. Call the waaaaahmbulance, they said, for a whiny, oversensitive ego who was bruised by an editorial decision out of his own control.

All of that’s fair. There’s no denying that the radio silence due to a celebrity’s tragic and recent passing isn’t over yet. Drake himself clearly knew that he had overstepped his bounds and tripped up on his months-long charm offensive, deleting the latter two tweets from his account not long after posting. But the backlash feels misplaced, still. Think back, if you will, to the blinders-on context-free response to Kanye West’s I Am A God, a song uniformly blasted for his assessment of himself, a confirmation of everything we already believed about the guy: that he’s a big-headed jerk with an impossible (and impossible-to-like) sense of self. Fair. But many of those critics never listened to the song, which is nearly satirical in its confident bent, wherein he is not making himself out to be a God replacement, but rather establishing himself in the pantheon, no more controversial than Eminem’s later and curiously less-slammed Rap God, say. But that ignores the context of from whence he came, which is rap music–a genre where braggadocio is the alpha and the omega. No matter if you’re a “lyrical” or a “conscious” rapper (terms that increasingly lack meaning), you’ve spoken very highly of yourself in lyric form. Yes, Drake is being cocky here, perhaps unduly so (depending on your reading of his tweet), but he’s definitely not the first rapper to be that way. He’s not even the first to lambaste the media and cite unfettered delivery of music to his listeners (Childish Gambino did this mere months ago).

Too much of society’s general response on pop culture matters is an echo-chamber exercise in confirmation bias. In no way am I defending Drake’s decision to comment too soon on Hoffman’s death, or the reading of his tweet that he thinks himself higher than Hoffman (which, for the record, I do not read that way–it seems rather that it’s the allegedly broken promise on the part of Rolling Stone to which Drake is taking umbrage). Drake’s a jerk? The people who privately felt that way get their sought-after prize here. Drake is whiny? Another point for the team in that camp. Pigeon-holing, lest we forget, is a first-world pasttime, and Drake–who gets critiqued for being whiny and “soft” when singing about his feelings and now crude when being confident–gets this all the time. But really, what Drake seems guilty of is not understanding how journalism, even music journalism, works, in feeling slighted by Rolling Stone not involving him by replacing him on the cover. But here’s the thing about that: Does Drake understand the principles of journalism, of the editorial process? No. But do we understand rap? By the same token, it seems increasingly clear we don’t–nor do we really care to.

(Also, the story in question from Rolling Stone is worth reading, if for no reason beyond the fascinating statement that Drake’s dream is to own the world’s largest residential pool. But compare it to the GQ feature from the summer, and you have to wonder–despite his honesty–what there’s left to profile of him.)

2. MORE ON CONFIRMATION BIAS, OR THE RIDICULOUS THING RELATING TO LORDE

Here’s an actual thing that briefly captured the imaginations of the Internet this week, implausibly: A plain WordPress blog by an author called “Snoopman” posted a long anti-capitalist screed that it alleged was Lorde’s Grammy-acceptance speech that was suppressed by the award organizers from the live broadcast. It took aim at a conspiracy of people who “hide behind slick marketing, ‘freedom’ propaganda and ‘economic growth’ rhetoric while they construct a global system of corporatized totalitarianism.” So many people (many of whom probably didn’t even watch the show, so as to ignore the fact that it’s hard to credit the ceremony organizers for any organizing, much less conspiracy) were eager to believe this that many shared it on social media (more than 2000 retweets, more than 10,000 Facebook shares) and legitimate media outlets reached out to Lorde’s people and look into the matter.

Take a minute, everyone, to breathe. It seems silly to have to say this, but if you don’t recognize the provenance, (again, this is from a site by an author named “Snoopman” who actually had the kindness to post this under “satire”) just consider for a second whether or not you should accept it and share it as fact. That’s a profound disservice to everyone’s notion of how good they are at critical thinking. Let’s just get back to posting legitimate and reasoned outrage about hard-hitting, truthful investigative news stories from The Onion.

Despite the league’s efforts to appear otherwise, professional football looks like it’s diving headlong toward a crisis of faith: is the dark side of the game worth the entertainment value that spawns so much Sunday devotion? After months of waiting, we have another opportunity to discern our own cultural feelings on professional football with the release of investigator Ted Wells’s report into the dressing room issues for the Miami Dolphins, where Jonathan Martin’s depression because of alleged locker-room bullying exploded that once-private corner. There is much to unpack, including the sense that Richie Incognito, the perceived villain in the matter, had cohorts, including the team’s best offensive tackle, which we hope will set off a serious recalibrating discussion about whether talent is a fair ward for punishment. But more importantly: if you think this is an issue that exists solely in Miami, you are surely mistaken.

4. LONGFORM OF THE WEEK

Lots of good, under-the-radar stuff this week to plumb during this  weekend (or long weekend, for everyone not in Quebec, New Brunswick, Nova Scotia, and the territories). But for this Beatles’ fan, this cover story by Billboard Magazine is the best: it takes the weeklong Beatles love-in and gives us the bare, hard and fascinating facts behind the band’s meteoric rise in six weeks in 1962, leading up to their appearance on the Ed Sullivan Show, a remarkable feature that highlights how the radio works and how the notion of “viral” crosses the boundaries of era.

5. TRAILER OF THE WEEKEND

Sorry to bother you on this weekend where you’re invariably devoted to House of Cards, but this return to a hotly anticipated Netflix production will help bridge the gap as you presumably take a break: Orange Is The New Black is back for its second season, announcing its release date as a short, exciting trailer to get you pumped for the season to come. Last season ended on a big-time cliffhanger, too, so for those of you who haven’t come around on this darkly comic show with its fascinating cast of characters stuck in a women’s prison, you’re officially on notice: you’ve got until June 6 to catch up.

A short trailer of this actually came out in October, but a long trailer with English subtitles came out last week: in Colombia, they’re producing a faithful, shot-for-shot remake of AMC’s critical hit of a show, called Metastasis. It’s a wild thing to see “Walter Blanco” played by a Spanish-speaking actor despite having many of the same traits as Bryan Cranston’s portrayal: earnest, schlubby appearance, life-defeated hunch, soul-burning glare. The show, which actually counts Breaking Bad creator Vince Gilligan as a consultant to the show, also replaces the hoodie-wearing Jesse Pinkman is the hoodie-wearing Jose Miguel Rosas and succeeds in translation, despite playing in a country where drug stories are staid narratives.