Sleeping Giant: at Cannes, a Canadian answer to 'Boyhood' makes a stir 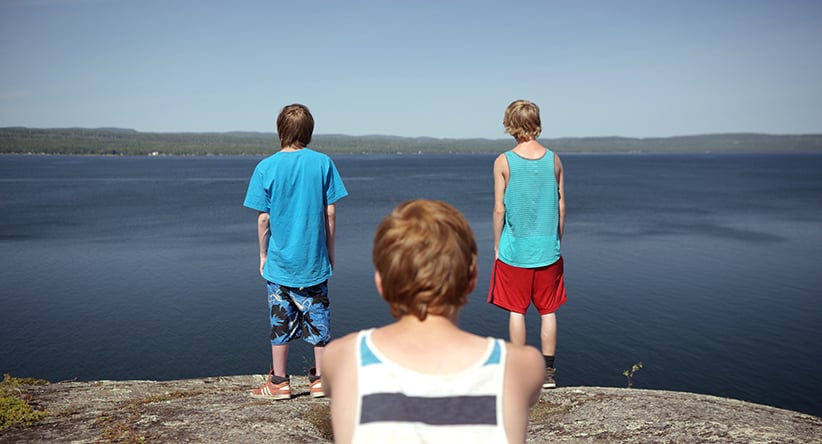 CANNES – It seems there are two options these days when it comes to defining Canada’s national cinema: Point to Quebec’s internationally rising filmmakers like Denis Villeneuve or Xavier Dolan and say fini, or outright ignore the question of our cinematic identity, because our Anglo films couldn’t possibly be artistically different or distinctive from those made in other English-speaking countries around the world. Or could they?

“Do you consider yourself a Canadian filmmaker?” That’s a question our homegrown directors are frequently asked, especially after they make that mythical jump to Hollywood, like Jean-Marc Vallée or Philippe Falardeau. But it’s a query that break-out auteur Andrew Cividino surely answers in the affirmative, as his debut feature Sleeping Giant may be one of the most Canadian—hell, Ontarian—films this writer has ever seen.

Sleeping Giant just screened here in sunny Cannes, in the international Semaine de la Critique (Critics’ Week), a sidebar event running concurrent to the main show, where Cividino’s compatriot Denis Villeneuve competes this week for the coveted Palme d’Or with his American production of Sicario, a drug war thriller. (Having ascended the ranks equally is Villeneuve’s contemporary Xavier Dolan, who may feel like casting his jury vote towards his Quebecois colleague.)

But Sleeping Giant is something special. And unlike most Canadian productions that have made it to this exhibition of world cinema, it doesn’t bashfully try to hide its roots, pass for a nondescript “North American,” or deny its national tendencies. It’s the tempestuous Thunder Bay story of Nate, Riley, and Adam, three adolescent boys who respectively live on two ends of the maturity spectrum, with Riley sitting on the fence somewhere in the middle.

With a hazy summer vacation before them, these boys are bored in that small-town way boys get bored, where idle hands turn into mischief, which devolves into social pressure and male aggression. Nate, the button-pushing daredevil of the group, can’t seem to understand Adam’s sensitivity or his disinterest in the cute girls hanging around them, and they clash fundamentally while Riley grounds the group. The gang is down to do almost anything; a legendary 100-foot cliff looms nearby, and later becomes a sticking point.

Opting for essentially non-actors in his casting selection, Cividino found Reece Moffett (Riley), Jackson Martin (Adam), and Nick Serino (Nate), who ably take us along on the bumpy ride. In one scene, a protagonist falls off a speeding go-kart, skidding hard across the asphalt. “How did you guys do that stunt?” I asked Moffett at an event here in Cannes. “That wasn’t a stunt,” he grinned. “That just actually happened.” Cividino left the outtake in the film.

In the boys we see a range of Canadian male archetypes: Nate, calling everyone “bud” incessantly and cussing with the slang and fire of a passionate Leafs fan, is the direct foil to Adam’s mopey silent type, the kid of polite, milquetoast parents. When a Settlers of Catan game gets heated, you know you’re watching a Canadian film.

The film is a nuanced study of male sexuality—especially of the sleeping sexual identities still waiting to be figured out. Many great Canadian works unpack issues of identity and sexuality, and Cividino’s film will add to that list, doing so in the foreground of Ontario’s gorgeous Sibley Peninsula, replete with photography of a craggy Canadian Shield.

Its title a reference to the Ontario cliff formation that from a distance resembles a resting figure, Sleeping Giant also nods to the untapped, inchoate prospects in young masculinity: growing up is difficult when there are so many different outcomes of boyhood, and despite that sense of the infinite that summer in small-town Ontario makes you feel, the youth of tomorrow aren’t invincible.