Four actresses allege in separate lawsuits claim that the Canadian theatre figure exposed himself, groped them, and otherwise sexually humiliated them

By Colin Perkel and Tara Deschamps, The Canadian Press January 4, 2018 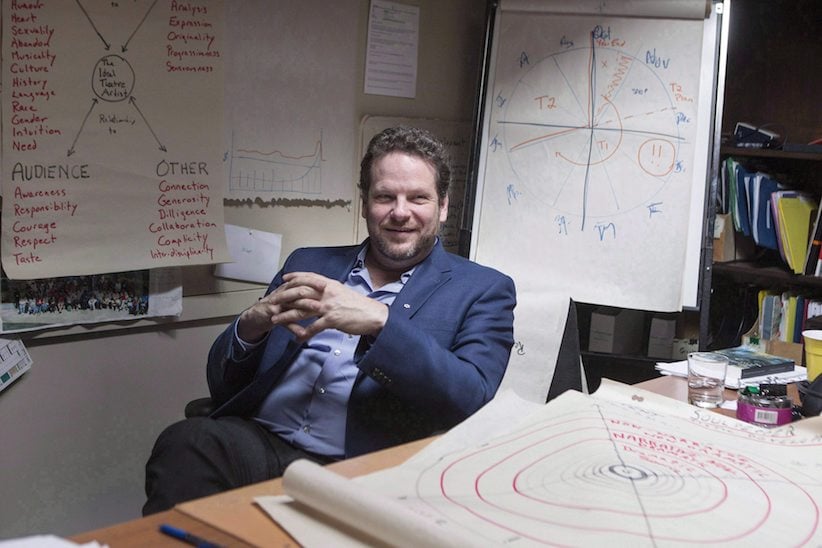 A prominent figure in the Canadian theatre world and the company he founded are facing four separate lawsuits alleging sexual assault and harassment. Director Albert Schultz is pictured in his office in Toronto’s Young Centre for the Performing Arts on Monday, March 20, 2017. THE CANADIAN PRESS/Chris Young

TORONTO – A prominent figure in the Canadian theatre world has been forced to step down from the well-known company he co-founded amid separate lawsuits from four actresses who allege he exposed himself, groped them, and otherwise sexually humiliated them.

The lawsuits naming Toronto-based Soulpepper Theatre Company and its founding artistic director Albert Schultz were filed this week by Patricia Fagan, Hannah Miller, Kristin Booth and Diana Bentley, who have all agreed to be named publicly.

Schultz said he would defend himself “vehemently.”

In her claim in Ontario Superior Court, Miller says Schultz, 54, harassed and sexually assaulted her when she was a performer with Soulpepper and as a member of Soulpepper’s academy.

Miller is seeking $650,000 in general and punitive damages for “sexual battery, the intentional infliction of mental suffering (and) harassment of a sexual nature,” according to her claim, which has yet to be tested in court. The claim also seeks $800,000 from Soulpepper.

“Albert is a serial sexual predator who … had well developed methods for targeting actresses and luring them into situations that he considered optimal for harassing and assaulting them,” Miller states in her claim.

Similarly, Fagan alleges in her lawsuit that Schultz assaulted her during a rehearsal of Twelfth Night in 2000, when he tried to show an actor what he wanted by “pushing his penis against her buttocks.”

The women’s lawyer, Alexi Wood, said in a statement that Soulpepper did nothing to protect the actresses from Schultz, who is also an accomplished stage and screen actor.

“Mr. Schultz abused his power for years,” Wood said. “My clients fully intend to hold him and Soulpepper Theatre Company accountable. Their brave lawsuit is the first step towards righting this incredible wrong.”

The allegations have not been proven in court.

However, Soulpepper’s board of directors said it had immediately begun investigating, and had instructed Schultz to step down from all his Soulpepper responsibilities pending its outcome.

READ: What we know—and have always known—about this moment in sexual harassment

Schultz’s wife and company executive director, Leslie Lester, volunteered to step down in the interim, the board said in a statement late Wednesday.

“Soulpepper’s priority is to create a workplace where all its employees feel safe,” the board said. “Soulpepper has recently commissioned and received a report from an independent workplace policy expert, which affirms the appropriateness of Soulpepper’s standards and processes.”

Given the litigation, the theatre company said it would have no further comment.

In his own statement, Schultz said he was taking a “leave of absence” pending the investigation outcome.

“These claims make serious allegations against me which I do not take lightly,” Schultz said. “I intend to vehemently defend myself.”

The lawsuits come as the entertainment industry grapples with growing allegations of sexual harassment and assault, a wave sparked by accusations that emerged against Hollywood giant Harvey Weinstein in the fall.

Soulpepper bills itself as Toronto’s largest not-for-profit theatre company and Schultz has played a key role in its repertoire. The company also provides training for aspiring actors and theatre artists.

Schultz is also an executive producer on the hit CBC television series Kim’s Convenience, which is independently produced for the public broadcaster by Vancouver-based Thunderbird Productions.

“In light of the serious allegations made public today, we expect Thunderbird will take the necessary actions to ensure a safe and respectful workplace and we have conveyed that to them,” said Emma Bedard, a spokeswoman for CBC.

In a statement, Thunderbird said it had a “strict no tolerance policy” against harassment and that Schultz had no role in day-to-day production of the series.

“We are saddened to hear about the allegations and have the utmost respect for the complainants and due process,” Thunderbird said.

In her claim, Booth says Schultz questioned her about her sex life and fiance and suggested they get a hotel room together. On another occasion, she says he pressed his “erect penis against her body” while hugging her.

The latest allegations against Schultz and Soulpepper come after the theatre company revealed in October that it had severed ties with longtime guest artist Laszlo Marton, who it said had engaged in sexual harassment.

According to Fagan’s claim, Schultz invited her to a dinner in honour of Marton after the company had severed ties with him. She declined.

Fagan also claims that in 2005, Schultz pulled down his pants and “showed her his penis,” leaving her humiliated. She says she told the play’s director what had happened.

“The director made no further inquiry and took no action, reinforcing the message that Albert’s abusive behaviour was acceptable and condoned by all at Soulpepper,” Fagan states.

As the founding artistic director of Soulpepper in 1998, Schultz has been widely recognized for his work, including being honoured with an Order of Canada in 2013 and a Governor General’s Performing Arts Award in 2014.

His many credits include a starring role in the comic trilogy “The Norman Conquests.”

“Thinking about the collective and creating opportunities for others as much as for yourself is, I think, much more rewarding in the long run,” he once said.

His Order of Canada investment acknowledges his creative spirit and contributions to Soulpepper and his “commitment to training generations of theatre artists.”

Schultz established a partnership with George Brown College to set up the Young Centre for the Performing Arts. His other acting credits include a role on an earlier hit TV series, “Street Legal.” More recently, he appeared on the miniseries “Alias Grace.”

Born in Port Hope, Ont., Schultz was drawn to acting by his mother’s community theatre work. He attended York University’s theatre program and then the London Academy of Music and Dramatic Art.