On the Hip's final tour, and enduring illness on stage 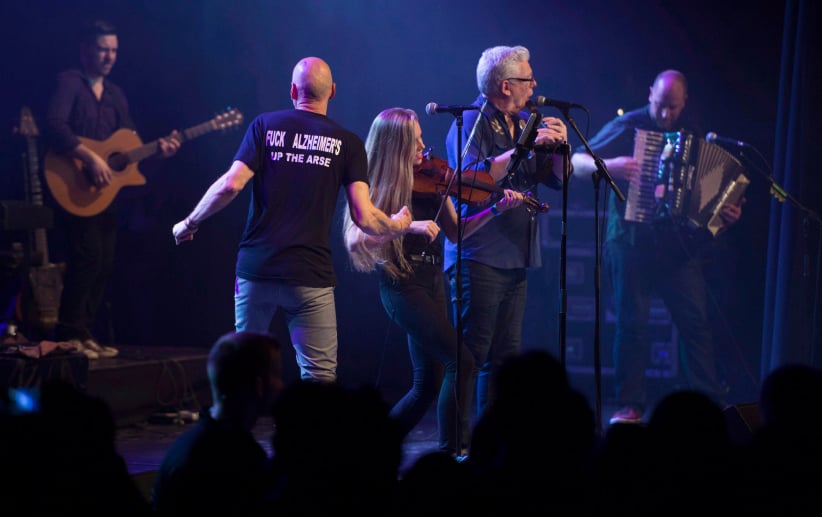 Members of Spirit of the West perform during their final concert in Vancouver. (Jonathan Hayward/CP)

Geoffrey Kelly is a founding member of Vancouver band Spirit of the West, contemporaries of the Tragically Hip; they toured together on the Hip’s 1995 Another Roadside Attraction tour, with the Rheostatics, Eric’s Trip, the Inbreds and others. Kelly’s co-frontman John Mann, who is a year older than Downie, was diagnosed with early-onset Alzheimer’s in 2014; the band’s final tour in 2015 and Mann’s struggle is the subject of the acclaimed new documentary Spirit Unforgettable.

When did you first hear the Tragically Hip?

A: We first saw them in Halifax in maybe 1987 or 1988. We were playing a couple of nights at Club Flamingo, a great little club in a mall. We arrived a day early and thought we should go see what the place was like. It happened that the Tragically Hip were playing. They hadn’t crossed our radar at that point, but we were pretty darn impressed. We didn’t meet them that night, but we got an earful of what they did.

What do you remember about that show?

A: I wasn’t much of a blues-rock fan, and they had that element in it. That might be a lazy description, but there were interesting twists in the progressions and Gord was pretty magnetic as a frontman. We left thinking, wow, we thought we had the most magnetic frontman in Canadian showbiz. The last time we saw a proper show was probably Another Roadside Attraction in 1995 when we were touring with them. We didn’t do all the shows; maybe seven of them. It was a dream come true to be on that bill. We were third from the end of the bill, before Ziggy Marley. They had a whole approach to a communal backstage, where all the dressing room trailers faced into the middle where there was a horseshoe pit and Ping-Pong tables to encourage everyone to hang out and be together. The first couple of gigs people were a bit aloof, but as it went on everyone was hanging out with everybody. They were the ultimate hosts. I have memories of the Inbreds and Eric’s Trip being the first bands of the day, and the Hip were there every single day watching them from the side of the stage. You’d think that after a few shows you’d say, “Don’t have to see these guys again, just saw them yesterday.” Nope. They were always there.

What was it like for you going on a final tour and being very open and public about John’s condition?

A: We were forced to end our career prematurely. We were at this great place where we could just pick and choose a few gigs a year and sail off into the sunset, almost just for the social reasons more than anything else. Then it got so hard for John. We didn’t want it to become embarrassing. He was such a champ right to the end.

Why did you make the decision to do not only a final tour, but a documentary about John’s struggle? Did you contemplate going out quietly?

A: We wanted to do one last run and say thank you to the fans. It’s very hard. Every gig on our last run, which was about 12 shows over a month, was emotional. Each night you play there are friends coming out from every town to say goodbye. There are always a few tears each night. In Vancouver, we had help from some friends: Jim Cuddy sang a song, Steven Page, Colin James, Paul Hyde, Andy Maize—loads of friends. I don’t think the Hip will do that; they don’t seem like that kind of band. For us, it also helped that the guests would sing one of John’s songs, so he could just do background vocals or listen to someone else interpret a song he sang for so many years.

MORE: Jim Cuddy on joining the Spirit of the West’s last show in Vancouver

Jim Cuddy told me about going out to sing a song during the encore at your final show and realizing that everyone in the crowd wasn’t just cheering all night but actually weeping. How do you perform in front of that?

A: I was able to hold it all together until the final note of the last song. It wasn’t even our song; we’d been covering a song by Hunters and Collectors from Australia, “Throw Your Arms Around Me.” It’s gorgeous, and it seemed appropriate and John sings it beautifully. When we got when John was holding that last note, I just started crying. I had been pretty good until then. I felt like I had to guide the ship through all of this. John couldn’t use the mic very much to do the intros, so I became the de facto front guy addressing the crowd. For me the overall feeling was sad and heartbreaking but also uplifting. We all felt incredible about how the gigs went, and John did so well, especially on the final night: he sang beautifully and seemed to be more present than he had been in weeks. Same when we played in Toronto at Massey Hall, which was filmed and forms the basis of the documentary. We were nervous because two nights before we’d played in London, Ont., and it was really rough. [Drummer] Vince [Ditrich] and I were hoping that John was able to sense the occasion, and he was really great that night.

What were preshow and post-show rituals like for John?

A: I’m sure Gord has some kind of quiet space before the show; we did the same for John. We’d keep the visiting to a minimum, and have a little after party but mostly quiet. Right before each gig we’d listen to music in the dressing room, which would get him in the mood. Music for him breaks through everything. He’ll be very quiet all day, and then he’ll come alive at soundcheck. He doesn’t differentiate between soundcheck and the gig; he’d be dancing around, everything. We’d make up these playlists of stuff he really liked to listen to before the gig. His wife, Jill, would take him out for a run and make sure he had the right food and enough sleep. It was a lot to get him ready to perform for 90 minutes. As a big family, we were able to get through it. I know the Hip will have a massive extended family that will be so crucial to them when they get closer to home.

Were you travelling with a doctor?

A: No, but at a certain point we needed John’s wife to be there, because administering the medicine started to get really complicated, and the diet. It gave us a little more time to concentrate on the show and less about just keeping John in the right shape. We couldn’t have done it without her.

Did you ever think, maybe this is morbid or too uncomfortable?

A: No. John would have said if he couldn’t do it. If he had a bad night, he’d get mad at himself but he wouldn’t let it linger. He’d let it go pretty quickly. We were all hyperaware of his condition that we all knew when it would be time to call it off. We planned it out way in advance. We knew it would be nice to finish at [Vancouver’s] Commodore Ballroom for the final shows. We could have done a bigger venue, but we’ve been playing there for years and they’ve been so good to us and they’ve let our kids come see the band there for years. We did three nights; we probably could have done four or five, but that would exhaust John and it’s also hard to hold a venue like that for that period of time. At the time our drummer, Vince, was so weak because he was waiting for a new kidney, so we had that to deal with as well. We had to do a couple of shows in the Maritimes without him. He was well enough to do the last two shows at the Commodore. It was a traumatic time all around. We were shaking our heads, thinking, what’s next? I know the fellows in the Hip are a strong bunch and they’ll make it through.

Did you see the Hip’s Vancouver show?

A: John and I went together and were so impressed, and I was so delighted to see John enjoying himself so much. When we first heard the news, John was the one who phoned me. It’s hard for him these days to get his thoughts across. He’s grasping for words a lot. He hardly ever phones me at all because it’s just too difficult for him. At the concert, he was having the best time and was blown away by the presentation of the whole show. I thought the whole show was beautifully done. There were moments of such tenderness and balls-out rocking and such support from each of the guys. I sent both Gordie and Robbie [Baker] a little note to say how proud we were of them and how beautiful the show was. Robbie wrote back to say what a weird thing it is to have both Gordie and John afflicted by these things. Gordie wrote back just to say, “Oh, man, we certainly had some great times,” probably referring to Another Roadside Attraction when we hung out for a long stretch together. They’re delivering the goods still, in a big, big way. It’s not like they’re hobbling into each city barely getting through the night. It’s as impressive as it’s ever been.

Michael Barclay is the co-author of Have Not Been the Same: The CanRock Renaissance 1985-95

FILED UNDER: Editor's Picks Geoffrey Kelly Spirit of the West The Tragically Hip