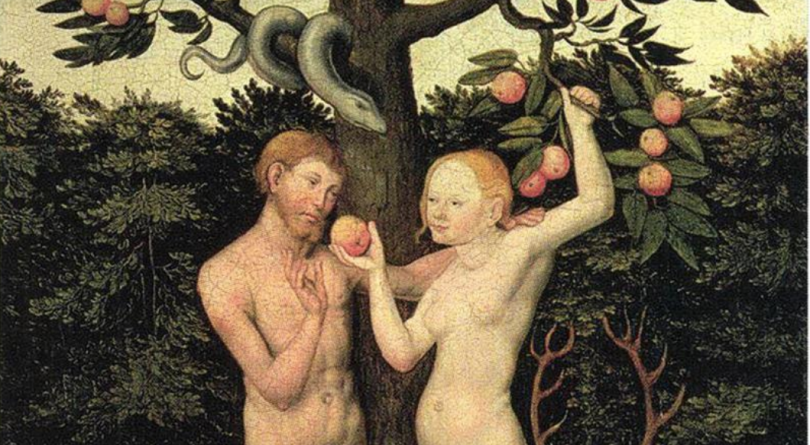 You don’t have to be Christian or Jewish to know the story of Adam and Eve; in fact, you can hardly have escaped it if you lived within reach of Western media over the past 2,000 years. Everyone has a store of expressions alluding to the first humans (whether actual or mythic), from fig leaves to forbidden fruit. We know what that fruit was—an apple—and what it signified: choice, knowledge, sexual temptation. And we all know that Adam and Eve lived in immortal innocence in a paradise called the Garden of Eden. Until, that is, they were tempted by a snake (Satan’s mouthpiece) and “fell,” out of grace and into human life as it’s been ever since—nasty, brutish and short.

We are far less aware that most of the above is unsupported by the brief Biblical narrative (Genesis 2:4 to 4:1), and some of it isn’t there at all. But it hardly matters, as Theresa Sanders notes in Approaching Eden: Adam and Eve in Popular Culture. The story of Adam and Eve—including its centuries of embellishments—is embedded in our deepest cultural DNA. For Sanders, a theologian at Washington’s Georgetown University, “It’s as if the story holds the same allure that the forbidden fruit held for the first couple.”

Whatever that was. Genesis doesn’t say. Early Jewish sources postulated everything from figs to pomegranates. But once the Bible was translated into Latin, a language in which the word for “apple” and “evil” (malum) is the same, the die was cast. Similarly, the fate of the serpent, who must have had legs as the story opens, for his punishment is to lose them: “Upon your belly shalt thou go.” Medieval artists often drew a salamander-like creature; moderns, less attuned to the text, tend to portray a snake from beginning to end.

What really interests Sanders is not the story’s trappings, but what popular culture has viewed as its essential message. Religious traditions may have held, in the main, to the belief that the expulsion from the garden was humanity’s greatest calamity, but most pop culture is suspicious of purported Edens. An episode from the first Star Trek series finds the crew of the Enterprise on an idyllic planet; rule by a computer has meant there is no sorrow, death, labour, sex or births. Capt. Kirk’s crew is forced to destroy the computer, thereby casting the inhabitants from an indolent life into a struggle for survival. Kirk is pleased to dwell on the upside: now, he tells them, “they can learn something about men and women—caring for each other, being happy with each other,” and that as they do so, the children will come. Easy enough for Kirk to say, since he gets to return to the comforts of the Enterprise, but Sanders’s point is that the episode is entitled “The Apple” in clear allusion to Genesis, and draws a straight line between the apple of knowledge and sexuality.

Nothing has roiled the waters of Genesis commentary more than what it might say about the relationship between men and women. Adam, after all, gains the headship over Eve—“he shall rule over thee”—and thus all husbands over all wives, because she sinned first. If patriarchal societies have focused on that after-the-fall aspect of the story, more feminist readings have concentrated on Adam and Eve in the garden, where husband and wife are helpmates to one another. (In any event, neither of the first couple is very brave about accepting responsibility: he blames her, and she blames the serpent, who, if anyone had bothered to ask, would surely have replied that “The devil made me do it.”)

But the aspect of their story most entrenched in popular re-imaginings is the forbidden fruit/sexual intercourse link. Most early commentators held with St. Augustine that there was no such thing as sex until the first couple sinned, “and the eyes of them both were opened, and they knew that they were naked.” Augustine took that as meaning they could now see what had not existed before: sexual arousal. Pop culture couldn’t agree more, and the presumed sexlessness of new Edens is one reason it rejects them.

But regardless of whether human sexual relations are inherently fallen (i.e. sinful), childbearing is inherently painful and dangerous. The story of Adam and Eve portrays it as a punishment: “In sorrow thou shalt bring forth children.” Strange then, that the “curse” of Eve has come to mean menstruation rather than labour pain. In the 12th century the mystic Hildegard of Bingen offered an explanation, granted her by God in a vision: during her period a woman “is in pain and in prison, suffering a small portion of the pain of childbirth I gave to Eve when she conceived sin in the taste of the fruit.” These theological explanations of natural phenomena had real-world implications after the arrival of modern painkillers. “Reverse the curse,” runs a 2008 Midol pain reliever ad campaign. But early anaesthesia faced resistance from doctors who felt menstrual and labour pains were divinely ordained.

There is no end, as Sanders’s survey shows, to the uses to which Western culture has put its foundational myth. In an era when our concepts of gender roles and sexual relationships—the aspects of the story of Adam and Eve that fascinate us most—are in flux, that’s not liable to change.