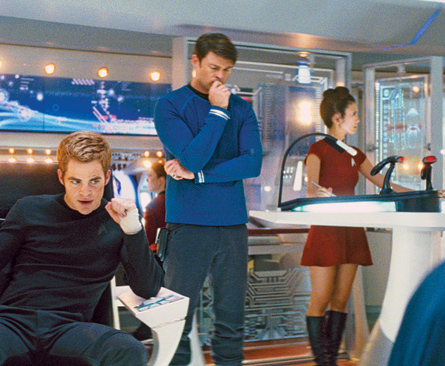 Believe it or not, there are inhabitants of earth, including at least one editor at this magazine, who still get Star Trek and Star Wars mixed up. But who can blame them? Both franchises are space operas with fanatical cult followings, and, for the uninitiated, it may be hard to keep it all straight—to tell your Romulans from your Rodians and your Klingons from your Kowakians, never mind whether you should slice your aliens with a hand phaser or a lightsaber. So patiently you explain that these worlds are polar opposites. Star Trek is techno science fiction set in a foreseeable future; Star Wars is mythic fantasy set in a past. Star Trek is an expanding universe, a promiscuous TV franchise that’s been cloning itself for over four decades, while spawning a string of ho-hum spinoffs for the big screen; Star Wars is a finite saga that George Lucas has forged into a monumental series of blockbuster epics, all bigger and more lucrative than any of the Trek films.

But as Yogi Berra (or is that Yoda?) once said, “The future ain’t what it used to be.” On May 8, a new Star Trek movie is being launched with enough thrust to propel the franchise to another galaxy of moviedom—one on a Star Wars scale. Although it’s the 11th movie in the series, it’s simply titled Star Trek, without a Roman numeral or a subtitle. It’s not a sequel, but a prequel. Like Batman Begins or Casino Royale, it’s a complete reboot—a creation story that recasts the original characters and explains their origins. Costing US$150 million, it’s also by far the most expensive Star Trek movie ever. That’s more than double the budget of any previous instalment, and more than any Trek movie has earned at the box office. (Only half of the 10 Star Trek movies have grossed over US$100 million worldwide, and none has topped US$150 million.)

So it sounds like a risky proposition. But executives at Paramount Pictures were so jazzed by preview screenings they’ve already commissioned a sequel from the same creative team. Which means they’re counting on this new Star Trek to boldly go where none has gone before—beyond its fan base.

Why all the optimism? Well, the movie bears the pedigree of producer-director J.J. Abrams, the TV mogul behind TV’s Lost and Alias. The only movie he’s made is Mission: Impossible III, but it did gross US$400 million worldwide. No one cares it was mediocre. Despite the media meltdown of its star, Tom Cruise, it made a whack of dough, and that’s all that counts in Hollywood.

Inverting the usual studio logic, Star Trek’s other big selling point is its largely unknown cast of fresh young talent, including heartthrobs Chris Pine as Captain Kirk and Zachary Quinto as Spock. There are some familiar faces: Brit sparkplug Simon Pegg (Hot Fuzz) plays Scotty; Winona Ryder is back from oblivion as Spock’s mother; Eric Bana (Munich) adds some villainous heft; and founding father Leonard Nimoy appears as “Old Spock.” But unlike the 10 previous films, which magnified household icons from the small screen, this Star Trek is not star-driven. It’s an attempt to retrofit a vintage cornball vehicle with sex appeal and state-of-the art digital effects.

Given the finicky temperament of space-opera fans, this could be a perilous enterprise. William Shatner has already lobbed a photon grenade at the new movie in a much-ballyhooed dust-up with its director. In a YouTube video, shot with his daughter, Shatner disputed a claim by Abrams that the actor turned down a cameo because the role wasn’t big enough. “Nobody ever came to me and said ‘We have a cameo for you,’ ” said Shatner, “and I’m just sorry that I’m not in your wonderful movie.” He went on to ridicule Abrams’s comment that it would be hard to bring Kirk’s character back to life now that he’s been killed off. Reviving dead characters, after all, is not rocket science. But then in a subsequent interview, Shatner dismissed the whole feud as “theatrical” fun and games.

In this world, it can be hard to tell the difference. Take Fanboys, a new movie about a posse of Star Wars freaks who stage a heist at Skywalker Ranch. This soft-headed satire revels in the gang’s punk-like bashing of Trekkies, who are portrayed as a cult of humourless nerds. But before the film’s release last week, director Kyle Newman issued a statement clarifying that he’s a Star Trek fan, and that the film’s jibes are just “good clean sci-fi banter.” Clearly, he felt his movie needs all the fanboys it can get, from both franchises. The same may be true of Star Trek.