1. YOU ONLY (SATURDAY NIGHT) LIVE ONCE

“I grew up and still live in Toronto,” said Drake, kicking off his hosting/guest performer duties on Saturday Night Live in a way that he certainly didn’t have to: shouting out Canada. Sure, it’s not the first time an SNL host has given props to their Canadian upbringing ( [mea culpa, only his sensibility is Canadian] Mike Myers, Dan Aykroyd, etc.) but it’s further proof that Drake is an able and willing ambassador for the country, and we’re better off for it. Whether it’s Drake making a call to lure a British national team star to play for Toronto FC or lending his brand to an otherwise anonymous midseason Raptors game (to the tune of selling out the stadium and sending resale costs soaring by as much as 10 times the ticket price), the rapper has legitimate international star power, and is putting it to use.

Drake talking proudly about being from Canada and Toronto is no small thing. Few have done it in such a way before. #DrakeSNL

His showing on Saturday Night Live will only fuel that narrative, and fairly so. He was as effervescent a host as the show has seen in a while, its first Canadian since Justin Bieber’s show last February, displaying a Justin Timberlake-like on-screen assuredness. Certainly, some of that ease comes from his days as an actor on Degrassi, but SNL has a rich tradition of using actors, and not very many of them are able to read their lines without leaning on a distracting teleprompter, something Drake eschewed, allowing him to fully inhabit his roles. And if you thought a hip-hop megastar might have been too cool to put on a purple wig or make self-knowing jokes by wearing old-man sweaters and dressing as a wannabe-cool dad, Drake didn’t get the memo.

Particular star turns? A meta impression of Lil’ Wayne doing an impression of a gun-wielding Steve Urkel, his cough-syrup drawl likely honed from years of working with the man Drake considers his mentor, and a too-brief scene where Drake and two other SNL stars engage in some profoundly nerdy live-action roleplay. He didn’t rest on his laurels for his performance, either. While standards Started From The Bottom and Hold On, We’re Going Home were expected, the former found him drenched in a Kanye West-inspired minimalist red light, and segued into new victory-lap B-side Trophies, and the latter included a transition into From Time, a song that had not been performed on TV before, and featured a surprise cameo from rising R&B songstress Jhene Aiko, with whom Drake shared sizzling chemistry.

Drake’s star turn as host wasn’t the only newsworthy thing about this week’s episode of Saturday Night Live, as it also marked the first week for new cast member Sasheer Zamata, the first African-American woman to work for the show since the departure of Maya Rudolph in 2007. But while she is still only a featured player, the lowest rung on the SNL ladder, Zamata was all over the screen, stiff internal politics and heavy hierarchy be damned, appearing as more than just a bit player in five sketches. (That’s more than usual, for featured players, who usually have to spend a whole season toiling in silent background parts.) Maybe it was simply because the writers wanted to use up what was probably a deep reserve of otherwise hard-to-use hip-hop jokes (they did deploy Kenan Thompson and Jay Pharoah in a lot sketches, too) but Zamata appeared very comfortable, singing a hook in a digital short, doing a funny Rihanna impression, and even earning curtain-call honours under Drake’s arm at the requisite thank yous at the end of the night. It’s not going to immediately dispel the criticism the show’s received for being less than diverse–the less-publicized news that SNL also hired two African-American writers helps as much as Zamata’s addition–but her smooth debut went a long way toward showing that they’re on the right track, and that they chose the right girl.

It’s hard not to be excited for Mitt, the documentary that made the Sundance rounds and will premiere this week on Netflix; the doc, after all, will show the world the results of filmmaker Greg Whiteley’s six-year immersion in the family of Mitt Romney, the man who would be president. Part of that appeal is Whiteley’s unfettered access to a presidential campaign, which is always fascinating from a political perspective, but it’s also because despite running twice for the U.S.’s top-dog spot, the world still barely knows Mitt Romney. On occasion, websites will post updates on Romney’s latest moves, whether it’s dancing Gangnam Style at a Mormon convention or eating alone at a Tex-Mex fast-food joint, written with the tacit, sad pallor that it’s all small potatoes compared to the office he was surprisingly close to holding just a year ago.

Plus, this trailer is excellent, teasing the fact that Whiteley even captured the moment Romney found out that Obama had bested him, and the talk he had with his family after the realization.

Mitt comes out on Netflix on Jan. 24.

4. LONG-READ OF THE WEEK

It’s well-written, tackles a fascinating subject, and is profoundly controversial. On Friday, ESPN offshoot Grantland published “Dr. V’s Magical Putter,” an in-depth feature about an enigmatic creator of an innovative golf device, which became an altogether different story when it was revealed that Dr. V was a trans woman, and that Dr. V killed herself shortly before the publishing of the story. Many online excoriated the piece as irresponsible, saying it poorly handled gender issues and betrayed its subject, since the feature itself says the writer promised to focus on the creation, not the creator. Particularly interesting? Earlier last week, Grantland ran a story about transgendered Against Me musician Laura Jane Grace, which most readers saw as excellent, compassionate reporting. Read both the story and the criticism, and decide on your own.

5. A SAD END TO BASKETBALL DIPLOMACY 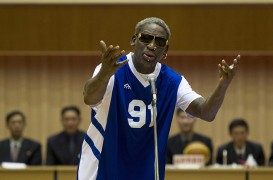 It’s sort of unsurprising, but still pretty disappointing: Dennis Rodman’s North Korean exploits are likely at an end as he has checked himself into rehab for alcoholism. Though covering his trips to the impoverished, isolated nation has become something of a novelty, what with the team of ex-NBA players he recently brought together for a birthday showcase game for Kim Jong-Un, he’s still notable for seeming to make actual headway becoming friends with the enigmatic leader, which is actually better than most diplomatic efforts in the last few decades. There’s no denying that Rodman needed help, though, after a CNN interview about detained American Kenneth Bae went off the rails, with his apology coming straight from the Rob Ford School of Drunken Stupors: “I had been drinking. It’s not an excuse but by the time the interview happened, I was upset. I was overwhelmed.” Seriously, hopefully the oddball Hall of Famer gets the help he needs.

6. MACLEAN’S IS BACK IN THE PODCAST GAME

Time to get a little bit self-serving! Maclean’s is excited to announce that we’re starting up a weekly politics podcast featuring our trademark slate of political commentators and our unique brand of analysis and newsmaker interviews. (Plus, check out that very cool photo of the three guys wearing suits helming this ‘cast.) This week, we tackle Neil Young’s take on Big Oil and talk to Natural Resources Minister Joe Oliver. Make sure to listen in–we’re just getting off the ground, but you’ll want to be on the ground floor for this one! And don’t hesitate to let us know what you think and what you want to hear!