In a 12-minute set in front of 110 million people, the pop star was the perfect entertainer. Now what? 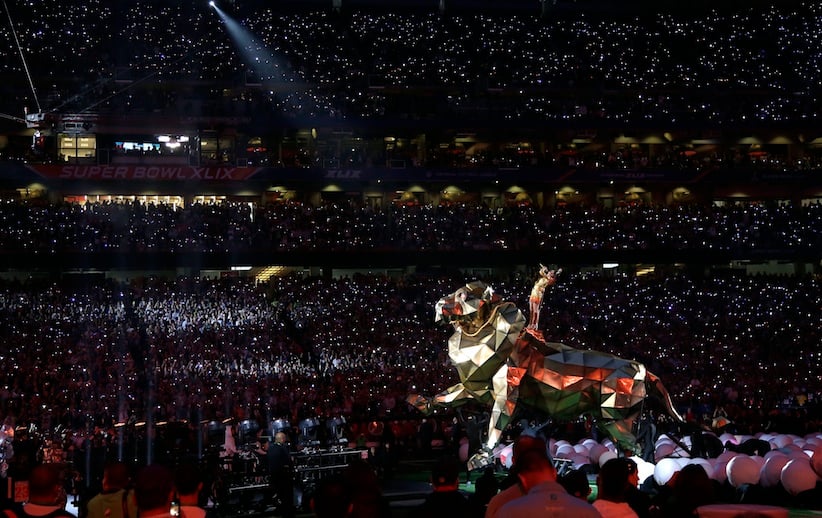 Katy Perry didn’t strut onto the Super Bowl stage on Sunday night. She didn’t have to. A giant red-eyed animatronic tiger was strutting for her, allowing Perry to glide into the arena on its back like Tarzan meets Katniss Everdeen, right down to the fiery dress.

It’s as if Perry’s entire career were building to this very moment. All those times she donned a cupcake bra, shot fireworks out of her chest, covered audiences in glitter; it had all been an audition for this chance to perform at the biggest celebration of food and sports in America—the Super Bowl—for some 110 million people.

It’s much further than anyone could have predicted she’d come, and it might prove to be the end of the line.

It seems strange now, but when Perry’s first single I Kissed a Girl exploded in the spring of 2008, she looked like a one-hit wonder. The song was catchy and fun, but it was entirely gimmicky. A summer song, full stop. As it turned out, Perry was just getting started. Her next album, Teenage Dream, charted an unprecedented five No. 1 singles, making her the first female artist to match the record reached by Michael Jackson.

Perry’s a talented, hard-working, phenomenally successful pop star. But Sunday’s epic dance party, with smiling palm trees, surf boards, and beach balls, makes you wonder if she is finally jumping the shark. After all, there were a lot of sharks up there dancing, too.

There’s a moment in Perry’s 2012 documentary Part of Me that flashes back to the mid-2000s, when she was still bouncing between record labels that didn’t know how to market her. She was championed by producer Glen Ballard (of Alanis Morissette’s Jagged Little Pill fame), and performing her songs in jeans and a white T-shirt. The baffled labels wondered: Is this the next Kelly Clarkson? Ashley Simpson? Maybe Avril Lavigne, if she acted a little angrier?

Perry, then about 20, demanded to know, “Whatever happened to just writing a really good song and letting it be a great song and having emotion?”

It’s a question she might well still be wondering, as she—now 30—pulls on four different Disney-chic costumes for one 12-minute set. The documentary nicely glosses over this point, but Perry’s embrace of all things cartoon was clearly calculated. Fine, Capitol Records (the label that launched her as the star we know today) didn’t force her to be the next Avril. But it’s hard to believe they let her be her true self, and she went home and dug out what was really in her closet the whole time: dozens and dozens of glittery cat costumes.

Like many female pop stars, Perry has cited Madonna as her career idol, expressing admiration for her evolution as an artist.

“[Madonna] kept everybody interested, because you never knew what she was going to do next, but whatever she delivered was a solid product,” Perry said in a 2012 interview. “I just hope to be the same.”

For nearly seven years now, Perry has cranked out the megahits, but she seems to be struggling with evolution. Her latest album, Prism, was billed as a more sophisticated, darker record—a turning point. It isn’t. There’s a track about birthdays that’s clearly about sex, another whose chorus is variations on roaring (which I love, for the record), and another that recounts fun times “getting our nails did, all Japanese-y.”

While Madonna never saw a boundary she wouldn’t push, Perry only seems to push in the wrong direction. Her very first promotional single Ur So Gay (about a metrosexual boyfriend) was already culturally tone-deaf when it was released in late 2007. Skip ahead to Perry’s most recent music videos, and she’s being accused of rampant cultural appropriation by sporting cornrows, dressing up as Cleopatra, and playing a Jewish bar mitzvah DJ.

When she talked to Rolling Stone last summer, Perry could barely contain how annoyed she was by the backlash: “I guess I’ll just stick to baseball and hot dogs, and that’s it,” she said. “I guess, like, everybody has to stay in their lane? I don’t know.”

Perry seems poised to do just that. On Sunday, she soared across the football field on the safest American symbol in history: “The More You Know” star logo.

But it’s hard to understand why such a big star needs to cling to a gimmick at all. Why is someone so talented pretending to be so goofy? Why does someone who so consistently dominates the charts so consistently dress up as food?

(Just in case her figure didn’t already clue you in: Her actual backstage demands are for a constant supply of fruits and veggies, plus a low-fat vegetarian meal. No hot dogs. No ice-cream sundaes.)

In interviews leading up to Sunday’s half-time performance, Perry said her goal was that, “everyone talks about the music and nothing else.”

Perry was the perfect Super Bowl entertainer. The music mash-up was second to none. But it’s the theatrics we’ll remember. And if she wants that to change, she has to evolve—for real, this time—in her post-Super Bowl career.