“Super-parenting or abuse?” How about neither? 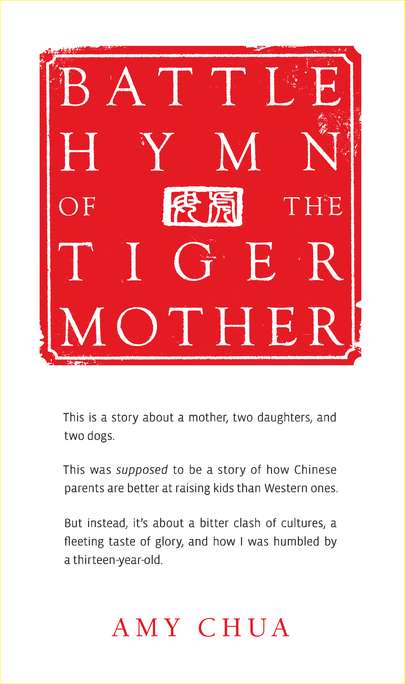 Amy Chua’s Battle Hymn of the Tiger Mother has elicited the sort of fury properly summoned by war crimes. No surprise there. The Yale Law School professor’s memoir about her attempt to raise her two daughters with strict “Chinese parenting” techniques combines two highly charged topics—ethnicity and child-rearing. Combustion was inevitable. As Chua tells it, she was a Type A Mom to the max, obsessive about her two daughters succeeding on her terms, believing that the regimented way she was raised by her immigrant parents gave her the tools to make choices that made her happy later in life. She was Draconian in setting goals for her girls, to whom she was endlessly devoted, refusing to praise results she saw as mediocre. She forced them to practice classical music for hours every day and deprived them of rites of modern childhood—sleepovers, play dates and computer games. Then her younger daughter rebelled and she was forced to recalibrate her approach dramatically.

Since its publication a week ago, both the book and Chua have been obsessively scrutinized—and trashed—in the media and online. The Wall Street Journal’s excerpt, “Why Chinese Mothers are Superior” (the paper’s title, not Chua’s), generated more than 7,000 comments on its website. The New York Times ran two features on Chua on Sunday, one gleefully titled “Retreat of the ‘Tiger Mother’.” Novelist Ayelet Waldman, who coined the term “sanctimommy” years ago to describe the smug judgment privileged mothers lay on one another, wrote a bombastic rebuttal in the WSJ: “In Defense of the Guilty, Ambivalent, Preoccupied Western Mom.”

Maclean’s Q&A with Chua also generated rabid comments and letters to the editor; some went so far as to suggest Chua be prosecuted for child abuse. Chua herself has been deluged with emails—even death threats.

Child abuse? Death threats? Really? Not that the unhinged reaction is surprising given the black-and-white treatment the book has received, evident on the CBC radio show Day 6. Trying to stoke listener response after an interview with Chua this weekend, they asked: “Is it super-parenting or abuse?”

Well, how about neither? What the Chua controversy does represent, however, is a classic example of how context can be utterly lost when a topic goes viral. It’s evident few weighing in to the debate, including many columnists, have actually read Chua’s book; they’re relying on the WSJ excerpt and other reportage—which creates an circular, reaffirming, increasingly inflamed Möbius strip of commentary.

Battle Hymn of the Tiger Mother is an engaging, thought-provoking read. Chua, whose previous books include the brilliant (and prescient) World on Fire: How Exporting Free Market Democracy Breeds Ethnic Hatred and Global Instability, is a smart, wry writer who assumes her audience will get the jokes and the subtle nuances—hence throwaway lines like “drums leading to drugs” that have come back to haunt her.

Chua’s sense of humour is often self-deprecating, particularly when accounting how off-the-wall ferocious she was making her daughters practice. But it’s clear that when she tells the now infamous story about a stand-off with her daughter Lulu in which the girl was sent outside in cold weather, and then refused to come back in, to Chua’s horror, it’s about Lulu’s stubbornness not cruelty on her part.

The book is candid about the weaknesses of “Chinese parenting”—that it leaves no room for failure. Nor does it always engender loyalty: Chua writes of her own father’s estrangement from his strict mother. Chua’s hardly shocking takeaway: Parenting is an evolving process, one that requires flexibility and listening to and knowing your children.

It’s rare to see someone wading into such a charged topic with candor and bravery. Western parents don’t take well to any criticism. I also liked the narrative arc of the book in which her certainty is upended without her original beliefs being totally extinguished and looked forward to talking to her for Maclean’s. But by the time I spoke with her, four days after the WSJ excerpt ran, she was on the defensive—not back-peddling exactly, but close to it.

Her fondness for rote memorization came in handy: many of her comments felt cautious, even canned. The humour and irreverent attitude evident in the book were notably AWOL. She repeatedly offered how proud she was of her daughters, of how “confident” and “independent” they are. Somehow conversation turned to novels with “unreliable narrators” and how that’s how she’d written the book—and hoped readers would get it, which was optimistic on her part . She says her next book is not about parenting. Here’s betting she’ll return to global insurrection and genocide, far more peaceful topics.