UPDATE: Susan Boyle does the inevitable

A little tweezing and dying for the Britain's Got Talent star 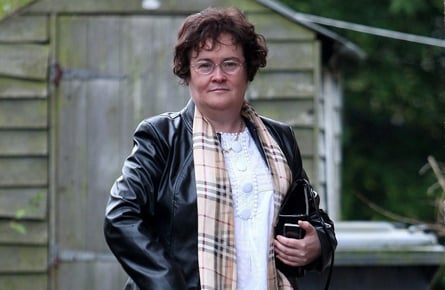 UPDATE: If the international media was scrutinizing your eyebrows with the sort of zeal that used to attend discussion of the arms race, maybe you’d do something about it. And so, despite Britain’s Got Talent contestant Susan Boyle’s proclamations that she wouldn’t change the way she looked, she has changed her hairdo, bought some new clothes and tended to her unibrow.   According to The Daily Mail, producers at Britain’s Got Talent are “frantic” about Boyle’s “make-over,” reporting: “they wanted to preserve her unique looks for the live finals.” Really? That seems difficult to believe. After all, the sexist discussion over Boyle’s appearance has brought the program priceless publicity. As has this latest minor “makeover” which no doubt will be analyzed with forensic precision. What was once an inspirational story has, sadly, turned to farce. 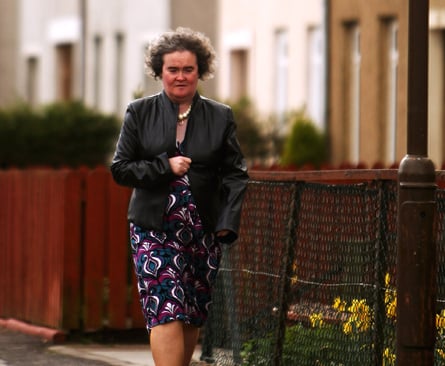 Since Susan Boyle’s audition on Britain’s Got Talent made her the world’s newest instant celebrity, the media has been in a relentless tizzy over whether the 48-year-old should submit to a “make-over.” That’s because unlike many women her age—most notably the two years’ older Madonna—Boyle doesn’t appear preoccupied with combating the realities of aging: she’s had no cosmetic surgery, no hair colouring, no tooth-whitening, no Botox; there are no two-hour-long daily workouts with a trainer. Nor does she seem concerned about being au courant in her clothing or hair style.  Which of course makes Boyle a freak within a culture conditioned by countless make-over shows that churn out anodyne simulacrums of conventional beauty.

Britain’s Got Talent host Amanda Holden, who herself is beautiful, tanned, and made-over, told British newspapers that the minute Boyle changed the way she looked was the moment “it’s spoilt,” suggesting the singer’s value and record sales are linked to the fact that she’s a physical curiosity.  Washington Post’s Pulitzer Prize-winning fashion critic Robin Givhan wrote that though it’s “politically correct” to say Boyle doesn’t need a make-over, a minor renovation was in order. Givhan counseled the singer to avail herself of flattering frocks sent by designers, “eye-brow arching and a smart new haircut.” The make-over need not be drastic, she wrote—not the “Extreme Makeover version but the Tim Gunn or What Not to Wear version.”  Jezebel.com weighed in that it would be “creepy” for Boyle not to alter her look slightly given the demands placed on all performers; she needn’t be “transformed” but “polished,” the Web site opined, noting: “To deny her that would be a grave injustice, and anything less would be, at this point, artificial.”

Boyle herself says she has no intention of changing the way she looks. As she told the Times of London in an interview last Saturday: “Why should it matter as long as I can sing? It’s not a beauty contest,” she said, expressing a view that reveals a refreshing naiveté about modern star-making machinery.

Of course, many can’t wrap their minds around the fact that a woman who appears so unworldly and mousy could possibly possess such confidence and independence of mind. So desperate was the British scandal sheet Daily Mail for a Boyle make-over that it made one up today, with the headline: “And you said you wouldn’t change, Susan Boyle! Britain’s Got Talent star shows off her new look.” According to the paper, the Scottish singer had “swapped her matronly look for a new, patterned dress and leather-look jacket, along with a pair of high heels.” Yet the accompanying photographs of Boyle wearing a PVC jacket and bright dress hardly suggest the intervention of a stylist.

Boyle said she didn’t rule out the idea of a make-over later on. “For now I’m happy the way I am—short and plump,” she told the Times. I would not go in for Botox or anything like that,” adding: “What’s wrong with looking like Susan Boyle? What’s the matter with that?” It’s an excellent question, if only because its answer suggests that it’s not Susan Boyle who’s in need of that make-over.