In its rebel expression, street art is democratic. “It’s not limited in that curatorial sense of how one finds art in a museum,” says Rafael Schacter, author of The World Atlas of Street Art and Graffiti. “It’s a multitude of conversations being had between the public, the artist and the built environment.” It’s a dialogue, he emphasizes, not a monologue.

The Atlas is organized by continent and profiles the styles of specific artists, highlighting how their work relates to a unique canvas: public space. Some trade in social commentary, like Berlin’s Aram Bartholl, who positions six-metre-high wooden replicas of Google Maps’ red bubble pin around the city, choosing the exact spots designated by the digital application in an attempt to blur physical and virtual realities. Others reproduce cultural iconography through a postmodern lens, like Mexico City’s Neuzz and his Day of the Dead images with a Roy Lichtenstein pop art twist.

Though street art is ephemeral by nature and made for public consumption, some enterprising property owners see dollar signs. High-profile U.K. street artist Banksy has had a few of his pieces chopped from walls and placed on the auction block. The most recent, Flower Girl, was removed from a Los Angeles gas station to be auctioned in December with rumours of a $300,000 price tag.

But Schacter, co-curator of the Tate Modern’s 2008 Street Art exhibition, believes independent public art only comes alive in its intended environment. “It’s not just the piece that’s responsible for the beauty of the art,” he says. “It’s that the piece within the built environment changes the perception of the public sphere itself and makes people look at public space—their public space—in a different way. That is its magic.” 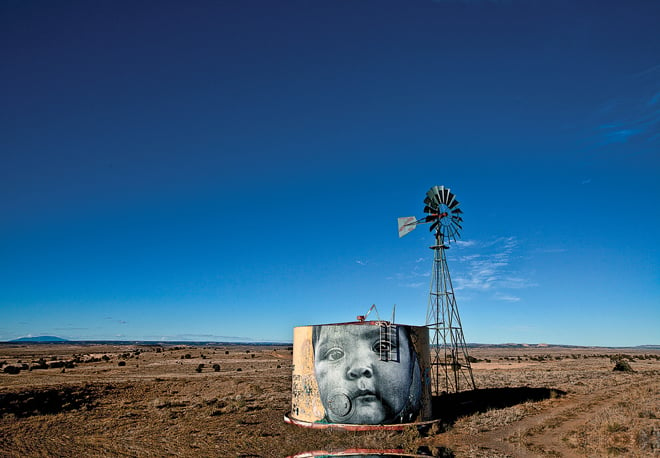 Jetsonorama's Navajo baby on a water tank in the Arizona desert.