In a wealthy suburb, a writer discovers people who take celebrating to a whole new level 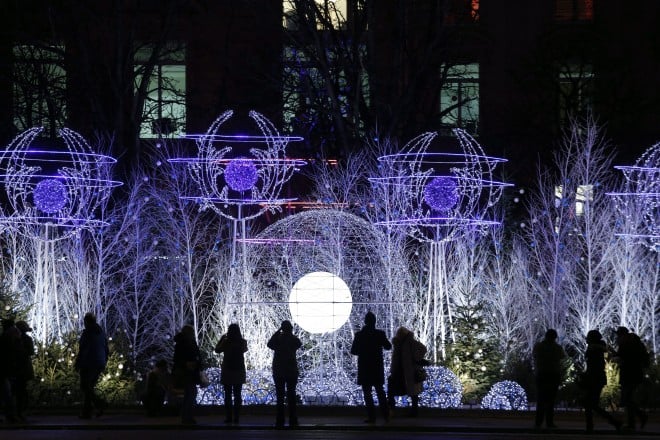 Christmas. No other day on the Western calendar is so pregnant with meaning and emotion. Through a long and winding road, our society’s dominant religion, our deepest and also most ambivalent feelings about our families, the instinctive way we demonstrate (and accept) love in a commercial culture, and the ancient rhythms of the year, have all became bound up in one shiny wrapped package. The family-Christmas tie, relentlessly reinforced by everything from advertising to sermons, means that Christmas and excess—in food and drink, in decoration and, above all, in gift-giving—go together like eggnog and rum.

More and better is the day’s unspoken motto, moan as we do—for a good century and a half now—about its frenzied and ever-accelerating consumerism. Christmas’s cultural sway cuts right across Western society. The handful of us who strive to avoid its weirdly compelling blend of faith, traditions (faux and real) and appalling expense—a mix of devout Christians seeking a more austere celebration of their saviour’s birth in a stable, those stressed beyond endurance by combustible forced intimacy with their families, and all-around Scrooges—find it near impossible to escape. Even the website antichristmas.org, which fulminates against “plastic Santa Clauses, cardboard reindeers and other trashy decorations,” nonetheless carries ads for Christmas cards and lights.

Besides, the resisters are dwarfed in number by those who want in. Christmas is no longer just for Christians. In post-Christian Britain, the Harry Potter novels, written by an observant member of the Church of Scotland, describe a world without churches, clergy or any religious faith, yet Christmas still remains second only to Halloween among the year’s major occasions. The Atheist’s Guide to Christmas, seasonally themed pieces by 42 well-known non-believers, was a bestseller in Britain, precisely because it fills a need: reassurance and happy-holiday tips for the Christmas-loving atheist. As one fan posted on Amazon’s U.K. site, “If, like for me, Christmas is one of life’s guilty pleasures, and you are afraid to so much as force a smile or raise a glass in front of fellow atheists—fret no more. Go out and buy a Christmas tree, cover it with lights, start wrapping the presents and even enjoy carol singing in church.” In North America, atheist websites annually debate the can-we-join-in? question; with the likes of Richard Dawkins stringing lights and wishing the whole world a Merry Christmas, the answer, increasingly, is yes.

Most of us enjoy it all immensely, despite the near inevitability of disappointment—even if it’s only a drunken uncle passing out into the stuffing—and the absolute certainty of overspending. Christmas is the largest single event in American life, notes Hank Stuever in Tinsel, a book both hilarious and moving. Between mid-November and New Year’s Eve, Americans spend half a trillion dollars on gifts, more than they spend on the continuing wars in Iraq and Afghanistan. Stuever, a journalist and self-described “blue-state gay guy,” is one of those who wanted back in after years of avoiding “the holiday’s many meanings, rituals and drudgeries.” So he went to Texas, the reddest of red states, to the wealthy Dallas suburb of Frisco, in search of the modern American Christmas. Over three very different years—from prosperous 2006, “now resembling a belle époque,” to the straitened circumstances of 2008—Stuever interacted with quite a few Friscans, two of whom would star in any tale of Christmas excess.

Tammie Parnell owns and operates, essentially by herself, a seasonally frenetic business called Two Elves With a Twist. Because people no longer have the time or energy to do it for themselves—but still very much want it done—Tammie decorates their homes for Christmas, for fees ranging from $400 to $1,200, and at a rate of one or two a day, six days a week, from early November until mid-December. By that point there would be something seriously askew with any woman in Frisco who didn’t “have her Christmas up,” in Tammie’s phrasing. Besides, the decorator has to turn to her own home, although, like the cobbler’s shoeless children, Tammie’s house suffers—at least in her opinion—in comparison to her clients’ homes.

The original second elf, a fellow mom at their children’s $20,000-a-year private Christian academy, left the business because she couldn’t stand the pace, according to Tammie. Stuever, who knows the depths of Tammie’s love for the season—her wedding was Christmas-themed—suspects she found her ex-partner irritatingly deficient in Christmas spirit. “For all I know,” he writes, “the other elf’s body is neatly bubble-wrapped in a Rubbermaid tub, way, way back in Tammie’s three-car garage,” hidden behind hundreds of Santa Clauses, elves, angels, Magi, camels, bags of garlands, tubs of ornaments, artificial trees and decorative plates.

Tammie’s business opportunities arise from the meltdown moments of other women, overwhelmed by the sheer size of their 6,000-sq.-foot “Hummer homes,” but her true calling lies in her desire to spread Christmas joy to them. (Throughout the Bush administration, Tammie harboured a secret dream of helping Laura Bush decorate the White House: “I have so many ideas for her.”) Tammie’s clients want nothing less than houses that look like Christmas magazines, and she wants nothing more than to deliver for them. On a first consultation Tammie checks the state of the client’s artificial tree—there are no real evergreens in Tammie’s world—before inquiring about the number of auxiliary trees required.

Auxiliary trees? Yes, indeed, a single tree just doesn’t cut it anymore. Tammie can arrange for animal- and princess-themed trees for children’s rooms, more masculine Dallas Cowboys or University of Texas Longhorns trees for the man cave and—naturally—something more elegant, more “ribbon-and-peacock-feathered,” for the living room. It’s the women with the big houses, who want every room decorated, who shrug, sign a big cheque and tell Tammie to do what she thinks best, who make her the happiest—not because of the money, but because they enable her belief that she’s working magic.

In 2007 the foreclosure rate in Frisco and the other wealthy suburbs near it began to grow; by 2008 it was skyrocketing. Tammie’s client list was cut almost in half, and she shifted gears in a game attempt to keep Christmas afloat for both Two Elves and her stressed-out clients. Now she spends half her time at temporary desks set up in half-deserted office buildings, selling seasonal merchandise directly to female employees. Stuever, who has come to believe that his nation’s economy would collapse to Depression-era levels if Americans ever took seriously the admonition to do Christmas with less, fervently wishes her all the success in the world.

Tammie’s near 50 per cent drop in business was matched, to Stuever’s assessing eye, by the same rate of decline in Frisco’s outdoor decorations. Not so, though, at the Trykoski home, the local example of that house every North American town seems to have, the visible-from-space Christmas-light extravaganza. Light shows are a peculiar sort of Christmas excess, not as tinged with greed as overindulgence in food, drink and stuff, but equally primeval in their roots. And as powerful an urge. The winter solstice marks not only the start of a long, cold winter but the return of light and hope. Blazing light from yule logs and candles has always marked the season, and within three years of Edison’s invention of the light bulb, a vice-president of the Edison Electric Light Company had Christmas electric tree lights made especially for him. In the 1950s technology and cost combined to make outdoor displays affordable and common across the continent.

But the revolution, the real full-bore, senses-reeling lighting assault, had to wait for the invention of the computer and some inspired tinkering. In 2003, Carson Williams, an electrical engineer in a Cincinnati suburb, programmed 16,000 lights to “dance” to an instrumental piece, Wizards in Winter, by the Trans-Siberian Orchestra. (Since 1996, the TSO has recorded three hit Christmas records, and Wizards in Winter has become the Stairway to Heaven of America’s light nerds, often known as Griswolds after the clueless light-stringer played by Chevy Chase in 1989’s National Lampoon’s Christmas Vacation.) Williams also rigged things so that the music played on a short-distance radio station; cars could tune it in, park for the song and then move on.

His display hit “a sweet spot,” in Stuever’s words, and became an Internet sensation, turning Jeff Trykoski—who had been doing much the same, except with more lights—into a local celebrity. Ever since he was a kid, Jeff had wanted his home to be that house, the one that brought the TV crews out and caused the traffic to crawl by for hours at a time. He was careful, when buying a home in 2001, to purchase in a neighbourhood without a homeowners’ association, because he knew the traffic would cause trouble. Sure enough, he has one neighbour who no longer speaks to him, but there’s no local governing rules to stop the Trykoski display. “If we had an HOA,” he says complacently, “I would have had big problems by now.”

In early November every year, Jeff and a dozen friends and relatives put up 50,000 lights, wired through $10,000 worth of circuit boards mounted on an outer wall, routed through the attic and controlled by a hard drive in Jeff’s study. Wizards in Winter, broadcast by limited-range FM transmitter, is programmed, second by second, to play along with the blinking. The result, in Stuever’s description, is a “pouncing, pulsing onslaught of light and music.” The front lawn, the house front, the roof, all trees and shrubbery, a purpose-sunk 10-m pole with light strings that give it a Christmas tree shape, and five mechanical reindeer are all festooned with lights that blink with “such staccato frenzy” that it seems under the control of a manic child. “This is not a gentle experience.”

Yet it is an enormously popular one, not only Jeff Trykoski’s tour-de-force, but all the Christmas lights defiantly put up against the encroaching dark. As popular, in fact, as every other kind of over-the-top deed and gesture this time of year, from eating too much to maxing out credit cards. Excess is Christmas. Excess is us.