Talk about living colour: 'I Send You This Cadmium Red' 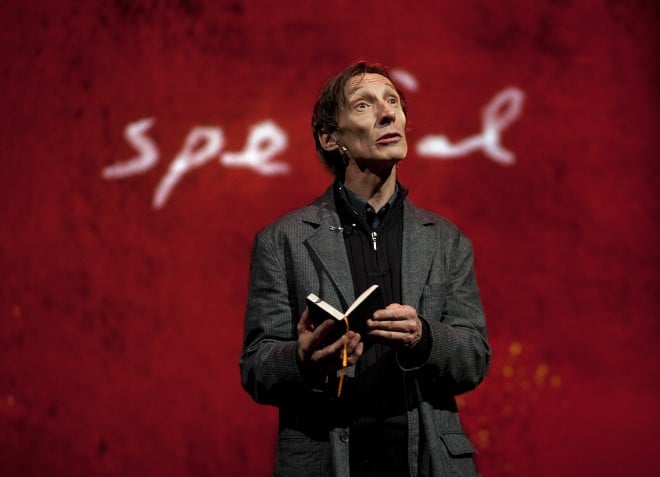 I thought I was going to see a play, something I always brace myself for, like a potentially tedious hike in uncertain weather. I was wrong. I Send You This Cadmium Red is a film, a painting, an essay, a concert—and, yes, a play—all at once. Therefore none of the above. It’s something else entirely. And it’s extraordinary. It’s a contemplation of colour via words, music, words and  projected animation. Colour is explored as a substance, a medium, a mood—an opaque fact and a window into infinity—but also as something tangible, almost human. And I can’t remember the last time I saw a play or a film in which the inevitable apartheid between form and content, style and substance, was so elegantly obliterated by a piece that is so utterly what it’s about.

Directed by Daniel Brooks, and produced by Andrew Burashko’s Art of Time Ensemble in association with Canadian Stage, I Send You Cadmium Red was originally commissioned as a radio work by the BBC and scored by British composer Gavin Bryars. It’s based on a book of correspondence about the nature of colour between two Johns, the visionary writer and painter John Berger and his painter/filmmaker friend John Christie. The original music was recorded in studio, and the Art of Time production is the first instance of it being performed live onstage. 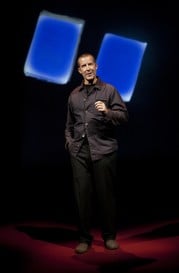 The script consists of 15 letters from book, performed by Julian Richings in the role of Berger and John Fitzgerald Jay in the role of Christie. As they take turns, bopping correspondence back and forth, each stands in a fixed spot on one side of the stage. Behind them are the musicians and a pair of screens, showing evolving images of colour, in animated brushstrokes, created by Newfoundland-born director Bruce Alcock.

Now, I know this all sounds highly conceptual and avant-garde. But a line from Christie sets the tone in the first few minutes: “It made me smile when I read a remark by the artist Frank Stella ‘Thinking about color abstractly hasn’t done me any real good.‘ ” That seems to set the bar. Even though this whole enterprise of interpreting colour is by de facto abstract, it never feels like it. There’s no intellectual clutter: the whole piece is beautifully transparent. The letters are witty and conversational, the images lush and mesmerizing. And the  incremental music infuses the whole piece almost unnoticeably, a slow bleed of aural colour.

Both actors voice the letters as if the thoughts are just occurring to them.  Richings (a familiar and unforgettable face from films like Hard Core Logo and The Red Violin) is especially incisive, as is Berger’s thoughts, which have the gymnastic wit of Tom Stoppard.

Erudite yet unpretentious, the two men see the universe in a grain of pigment. As they dwell on blue, they reference Matisse (“a square metre of  blue is more blue then a square centimeter of the same blue”), Yves Klein (whose blue is so dense “it affords no peace, it nags”), Charlie Parker (“who became Bird because he knew about blue”), the blue of “memory and nostalgia,” the blue of “effrontery and impudence,” and the “sexy” blue of blueberries.

They talk about how the russet red of saffron sheds a yellow stain, which we see crawl like a caterpillar across the screens. They talk about Van Gogh, Kadinsky and the circularity of yellow; the Chauvet Caves and darkness as the substance of memory; the sacred quality of gold, which Berger says is the naked hue, and the only one that is the same on both sides.

I Send You This Cadmium Red is preceded by a 20-minute companion piece, a dance by two men choreographed by James Kudelka and also set to the music of Bryars, performed live. But the music was played over a loop of a man’s voice repeating the same phrases over and over. There was something in the sound of that voice that I could not bear. Right away I began to feel an intense aural claustrophobia, which turned those 20 minutes into torture. It was an allergic reaction, and strictly personal; it made it impossible for me to appreciate or judge the piece, which others seemed to enjoy. Cadmium Red  more than made up for it.

I’m afraid I’m late out of the gate on this rave. I Send You This Cadmium Red ends its run at Toronto’s Berkeley Street Theatre on Oct. 22. It’s a must see.