Psychologist proves that even adults can learn to play guitar 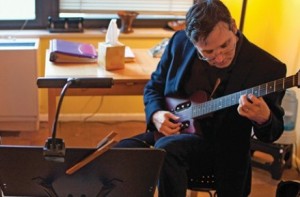 Like a lot of academics in his field, New York University psychology professor Gary Marcus believed the brain acquires certain skills such as language during early critical periods and, after that, the window of opportunity shuts. Children immersed in a new language learn more quickly than adults, according to some studies, but Marcus was beginning to have some doubts about the “critical period” theory.

In his book, Guitar Zero: the New Musician and the Science of Learning, he decided to test whether an adult with clumsy fingers and no sense of rhythm like himself could pick up the guitar at age 38On a sabbatical, Marcus retreated to his in-laws’ cottage near Magog, Que., where he was delighted to discover after a few weeks of daily practice he was capable of playing “faintly musical” scales. Within a year, he was on stage in a summer-camp rock band, performing original tunes with the kids.

None of this was easy, he explains in the book. The first two weeks were brutal. “The beginner has little choice but to memorize an obscure series of shapes. And even once one memorizes where one’s fingers are supposed to go, there is the by no means trivial matter of holding them all down at the same time, each perfectly aligned, without creating a foul noise known as fret buzz. For the first several weeks, that challenge alone seemed almost insurmountable: the idea of shifting my hand from one chord to the next in time with a song seemed almost comical.”

His only hope was to immerse himself. “The plan,” he said in an interview, “was to work on the music as many hours of the day as I could stand, which I think turned out to be in the order of six hours a day.”

Reading music is the least important skill, he says, and most guitar teachers don’t use sheet music at all.

In the book, he says the sheer amount of brain rewiring was almost overwhelming. “I wished desperately that there were shortcuts, but as a cognitive psychologist I knew better. Playing smoothly would entail rewiring my whole brain, from my temporal lobes to my prefrontal cortex, and there was no way around that.”

After six months Marcus hired a teacher, which he says he should’ve done sooner. “But I didn’t know there were teachers who could be supportive of someone with as little talent as I have. I laboured under the illusion, which I now know to be false, that teachers only wanted to work with good students. ”

As for the notion that kids learn faster, Marcus doesn’t buy it. In the book he explains lab research shows otherwise, with the exception of auditory learning. “In a few direct comparisons of procedural learning in children and college-age adults, adults actually tend be to quicker learners.”

When kids do outshine adults, it’s because they’re more persistent. “The same drive that can lead [kids] to watch the same episode of a TV show five days in a row without any signs of losing interest can lead a child who aspires to play an instrument to practise the same riff over and over again.”

The key for anyone is practice. “Deliberate practice is focusing on one’s weaknesses rather than simply fooling around and playing to one’s strength. Studies show that practice aimed at remedying weaknesses is a better predictor of expertise than raw number of hours; playing for fun and repeating what you already know is not the same as efficiently reaching a new level.”

Even the great jazz guitarist Pat Metheny continues to develop his craft, says Marcus. “For all his accomplishments, he still keeps studying; every time Metheny plays, for instance, he keeps a diary—typically six to eight pages long—analyzing what worked, and what didn’t work, in order to make subsequent shows and recordings even better.”

After a year and a half, Marcus believes his quest was a success. “I’d learned to improvise and to make up my own music. Not well enough to headline a band, perhaps, but well enough to jam with my friends, and well enough that I wanted to keep playing and studying music for the rest of my life.”