A fairy tale match: Frozen's Elsa and Anna come to Once Upon a Time

Frozen is more than box office gold, it's a cultural phenomenon 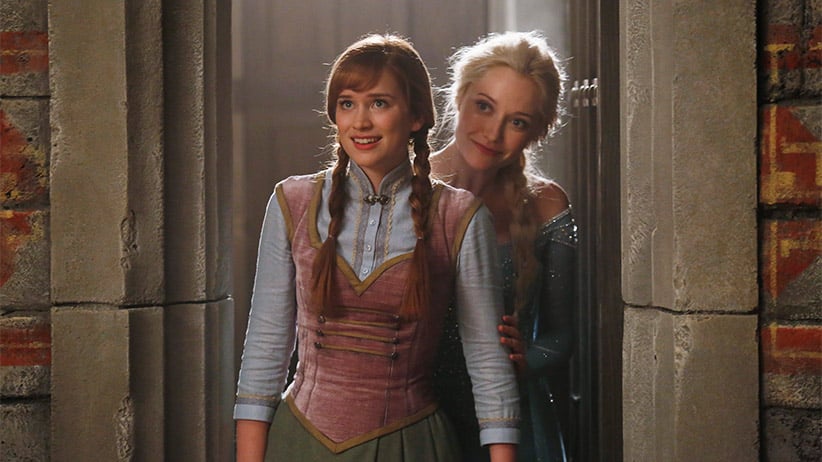 When Frozen was released last year—the animated musical about two orphaned princesses, impetuously optimistic Anna and isolated Elsa—it swept around the world like a blizzard. It’s the highest-grossing animated film of all time and No. 5 on the overall movie list with a box-office take of US$1.3 billion. Rather than following the well-travelled route for children’s movies—big-screen, DVD and digital releases plus a few seasons of merchandising—this Oscar-winning film is breaking new ground in its plot and marketing strategy. Along the way, it has become a cultural phenomenon.

It isn’t just children who are obsessed with Frozen, who are belting out its self-empowering anthem Let it Go, reciting dialogue verbatim and getting parents to empty stores of products. Adults are equally enamoured: Elsa jumped 243 spots to land at No. 88 on the BabyCentre list of baby names, and U.S. tourism to icy Norway is up 37 per cent. Among those grown-ups are Eddy Kitsis and Adam Horowitz, creators and executive producers of ABC’s Once Upon a Time (CTV in Canada, at 8 p.m. EDT on Sundays), in which fairy-tale characters inhabit the “real world” town of Storybrooke, Maine.

“We couldn’t stop talking about it,” Kitsis recalls. So, with 20 plot ideas in hand, he and Horowitz asked Disney for permission to use its brand-new characters in their show. “We absolutely never thought they would say yes,” Kitsis says. Disney agreed to an 11-episode arc, starting on Sept. 28. The producers, who radically reimagine characters—last season, Peter Pan was bad and Captain Hook a hero—insist they won’t tinker with Frozen’s inhabitants. “We borrowed the car and want to bring it back without a dent,” Kitsis says.

For Kitsis, who lives and breathes mythical tales, Frozen’s appeal is that “it has heart, humour and a great message. It speaks to everybody at every level.” George Bizer knew Frozen was different when his seven-year-old daughter, who holds firmly anti-princess attitudes, wanted to see it. “They are strong princesses, Daddy. You’ll like them,” he recalls her saying. He did. “These are not your typical, hyper-feminine, ‘please save me’ women,” recalls Bizer, a psychology professor at Union College in Schenectady, N.Y.

In Frozen, Elsa runs away to an isolated mountain while her long-concealed magical ice powers plunge her kingdom of Arendelle into a deep freeze. Anna sets off after her to rescue Arendelle and her sister. There isn’t even a royal wedding: Elsa stays single while Anna ditches first love, fraudster Prince Hans, for Kristoff, a rural ice-cutter.

The “feminist, but not too feminist” ethos isn’t Disney’s only adoption of moderate versions of current cultural attitudes, says Nicholas Sammond, a University of Toronto cinema studies professor. Kristoff is a manly man who’s happy to work alongside strong-willed Anna, while an innkeeper is a married gay father of four. And the villains turn out to be the sisters’ own imperfections—Elsa’s blinding fear, Anna’s tempestuousness—while the sisters’ ultimate saviour is their true love for each other.

The other component of its success is Disney’s PR strategy, says Sammond, the author of Babes in Tomorrowland, a look at the company’s marketing to children. Though known for aggressively protecting its valuable trademarks, Disney has taken a laissez-faire attitude toward millions of fan-made videos, websites and blogs devoted to Frozen. The adoration not only acts as free marketing and lets the brand grow organically, but Disney also recognizes that exerting authority over digital tributes is as futile as playing Whac-A-Mole, Sammond notes. Businesses are also getting into the act: Summer camps devoted to Frozen were booked solid, while Elsa’s blue sequined dress is shaping up to be the hottest costume, come Halloween.

After the sisters leave Once Upon a Time, they aren’t destined to disappear. A Broadway musical is in the works and a sequel to the film seems a sure thing, given the ongoing worldwide fascination. In Buan, South Korea, a town without a theatre, many students wear Frozen clothing, including full costumes, to school daily, says English language teacher Ian Bethune. It’s such a cultural marker that their favourite request at the end of class is a song viewed more than 500 million times on YouTube: Let it Go.

FILED UNDER: CTV Disney frozen Once Upon a Time