The challenges on this leg of the race left something to be desired. But the episode's bittersweet end was worth the wait. 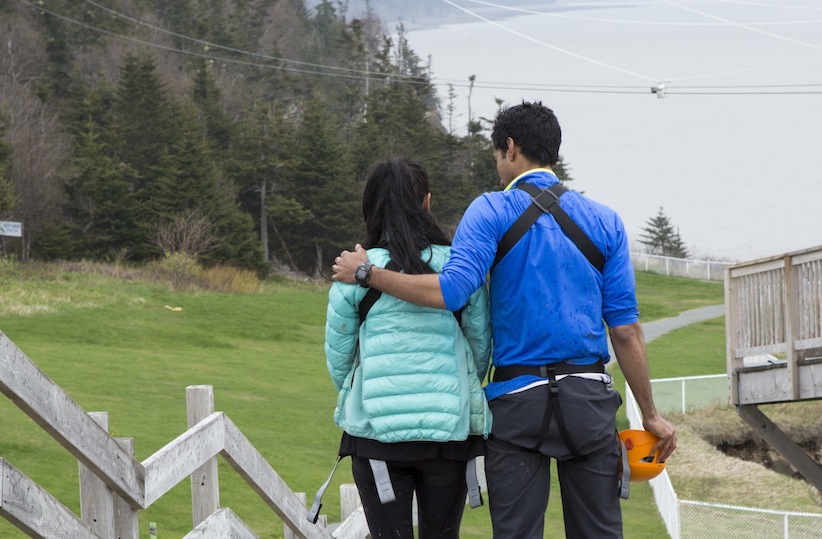 Last night, The Amazing Race Canada went somewhere it has never gone before: New Brunswick. Not even Sukhi and Jinder could muster up a squeal for this destination—although maybe that’s because they were afraid they’d have to speak French.

New Brunswick is kind of like the bridesmaid of the East Coast; it doesn’t have P.E.I.’s quaint charm, Newfoundland’s rugged beauty, or Nova Scotia’s fantastic capital city. So where do you go when you lead an international race there?

To the Dairy Queen.

The teams drove themselves across Confederation Bridge to Shediac, N.B.—”known as the lobster capital of the world”—to attend an Acadian birthday party at the local Dairy Queen. I’m still trying to figure out the connection.

While Mickey and Pete can make anything entertaining, Destination DQ was undoubtedly the weakest challenge of the entire race. There were no tricks, no screw-ups, just the four remaining teams making Blizzards and decorating birthday cakes, sporting DQ visors and aprons. Stay tuned for next season, when the teams visit a Scotiabank in Red Deer, Alta., to open a savings account!

But in the background, the long-anticipated fall of Sukhi and Jinder was beginning to play out.

As a team, the brother and sister’s weakness is that when things start to go wrong, they hit the panic button. They don’t shrug it off as Mickey and Pete do, or channel their energy into an unbreakable focus as do Meaghan and Natalie.

Sukhi and Jinder began this leg of the race in first place, feeling on top of the world, until they hit a bump: On their way to New Brunswick, Sukhi ran a red light. Unfortunately, Christy Clark wasn’t there to offer advice on getting away with it. Punished with an automatic 15-minute penalty, they sat at the side of the road, watching other teams pass them, their anxiety levels rising.

The siblings have rallied under similar circumstances before, but it was all downhill on Tuesday night. They missed turns, drove right past destinations, and fell into last place. In the frenzy to get started at the Detour, Jinder lost their clue, which had the instructions. The siblings desperately needed it to understand the complicated challenge: The teams had to memorize and arrange international signal flags on a beach to communicate a message. But the clue was MIA, and they weren’t getting a helping hand.

“As if,” said Ryan and Rob, who were the victims of their U-Turn.

“Sorry,” said Mickey and Pete, who say the siblings “harsh their mellow,” which is hippie code for “we can’t stand them.”

Olympians Natalie and Meaghan, however, took pity on them—even though they’d try to point them in the wrong direction in P.E.I. Meaghan handed over the clue, reasoning that she wanted to win the race “the right way.”

There’s a lot of talk on The Amazing Race about playing the game the right way. It’s a wholesome show—much more so than other reality series—and probably the only one where contestants worry about unwritten rules. Many teams look down on using U-Turns, even though they’re a perfectly legal part of the race.

While hiding Sukhi and Jinder’s clue would have been out of bounds, I don’t think there was any reason for Natalie and Meaghan to share their own clue with them. But it does mean that, unlike most reality-TV contestants, they’ll be finishing this show with reputations even more squeaky-clean than when they started.

In the end, sharing their clue didn’t matter much; the siblings finished the flag challenge in last place, and didn’t catch up on a tough physical challenge that forced teams to rappel down a cliff, then climb back up.

“I know we’re done. It just sucks,” said Jinder, after Rob and Ryan zip-lined over top of them to the pit stop, coming in third place.

(As a quick sidebar, congratulations if you picked Rob and Ryan in the office pool; you are probably the only one who thought they’d get this far. As Jon Montgomery told them: “It’s pretty miraculous that you’re here, I’m not gonna lie.”)

Sukhi and Jinder’s elimination is bittersweet: On the one hand, we’ve been saved from the possibility of them winning the whole thing, and the insufferable shrieking that would happen. On the other hand, they are a far more compelling team than Ryan and Rob. A finale between Natalie and Meaghan, Mickey and Pete, and Sukhi and Jinder would have been a fantastic match-up, a battle between the focused, the fun, and the frankly crazy.

Next week, the three remaining teams fly to Ottawa in search of the finish line. Natalie and Meaghan are definitely the favourites to win after another first-place finish last night, but if anyone’s going to pull off an upset, I think it’ll be Mickey and Pete.