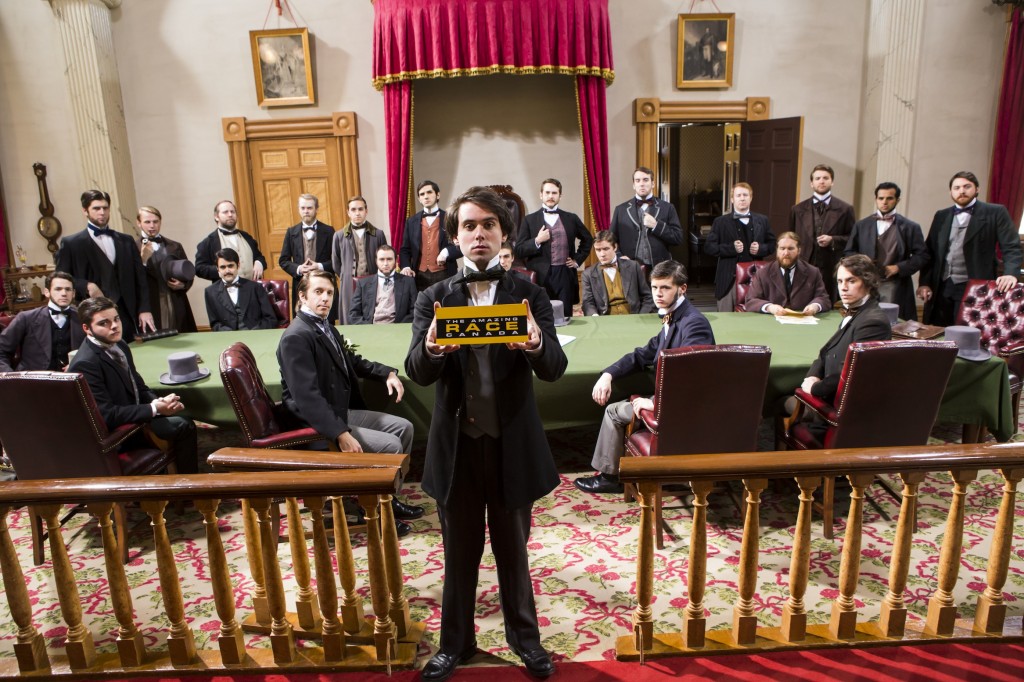 Canada’s Fathers of Confederation—with a clue card, of course, from The Amazing Race Canada. (Handout/CTV)

One hundred and fifty years after Canada’s founding fathers met in Charlottetown, a modern wave of nation-builders descended upon the city: the five remaining Amazing Race Canada teams.

From the tiny P.E.I. airport, the teams drove their Chevrolet Impalas (product placement #384) to the Red Shores Racetrack, where, instead of betting on horses like normal tourists, each team had to divide into one “horse” and one “driver” and pull each other around in a cart.

As Alain sweated and Jinder wailed for water, and an Olympic gold medallist had to switch places because she was too exhausted, you had to ask yourself: Who is going to apply for this race next season? (The mind-blowing answer: thousands of people!)

Mickey and Pete completed their two laps first and headed to the next stop: Province House in Charlottetown, the birthplace of Confederation. Because the only thing this show loves more than product placement (the teams also filled their tanks at a Petro Canada last night, and paid with their Scotiabank Gold American Express cards) is a good Canadian history lesson.

At Province House, the teams memorized and identified 10 delegates at the Charlottetown Conference, played by actors. It wasn’t a proud day for former prime minister Charles Tupper; Pete identified him as “Charles Tuppy” and Meaghan repeatedly called him “Charles Tapper.”

Sukhi, who is actually a very able contestant when she stops asking other people for help, completed the roadblock first. From that point on, she and her brother Jinder were unstoppable, reaching the mat first after throwing themselves into the dirty, smelly task of processing 816 kg of mussels.

“This is not a fluke, this is a streak. We will do anything to win this,” Sukhi declared—and, for the first time, I’m starting to think they could pull it off.

But the emphasis is on “will do anything to win.” En route to the pit stop, the siblings stopped for directions and then tried to wave Natalie and Meaghan in exactly the wrong direction.

“We ain’t stupid. We got a map,” the women scoffed.

Yet Sukhi and Jinder managed to find the pit stop, exit their car, and beat the women in a foot race, reaching the mat just seconds apart.

There, tension levels reached heights previously unseen on Canadian reality television, as Meaghan and Natalie were forced to stand next to Jinder and Sukhi and listen to Jon Montgomery list off the prizes the siblings had just won. Their arms were crossed. Their lips were pursed.

When Jon turned to the Olympians, asking Meaghan, “What’s going on here?” she told him about the sneaky attempt to mislead them: “I just think there’s a right way to win and a wrong way to win.”

Jinder and Sukhi, covered in mussel mud, could not have cared less. “You’re just mad that you’re in second,” said Jinder with a shrug.

I think we know whom the Olympians just cast as Team USA in their minds.

Mickey and Pete finished a respectable third on Tuesday, and Ryan and Rob managed to come in fourth, despite having to dig through manure in search of three jars of moonshine for their Speed Bump.

Alain and Audrey finished last, reaching the pit stop only minutes after Rob and Ryan—but, unlike Rob and Ryan in two prior weeks, they weren’t saved by a non-elimination round.

The newly engaged couple took their elimination in stride: “I’m sad this experience is over,” Audrey said. “We didn’t win the grand prize, but we got our own grand prize.”

The four remaining teams can be divided into two camps:

The Olympians and the Muskoka bros are fan favourites who have run a competitive but clean race. Neither team has ever finished last, U-turned another team, or misled another contestant.

They’ve obviously worked hard to make it this far, but whether they deserve to win is up for debate. They’ve both been saved by a non-elimination round—for Ryan and Rob, twice. Jinder and Sukhi used a U-turn (against Ryan and Rob) and have irked the other teams by asking them for help, while misleading others when given the chance.

Next week in New Brunswick, the four teams will be cut down to three, who will compete in the two-part season finale. The Olympians have earned the win, but I’m starting to like the idea of the uber-laid-back Mickey and Pete crossing the finish line first. It would suggest you don’t need to stress to be the best.