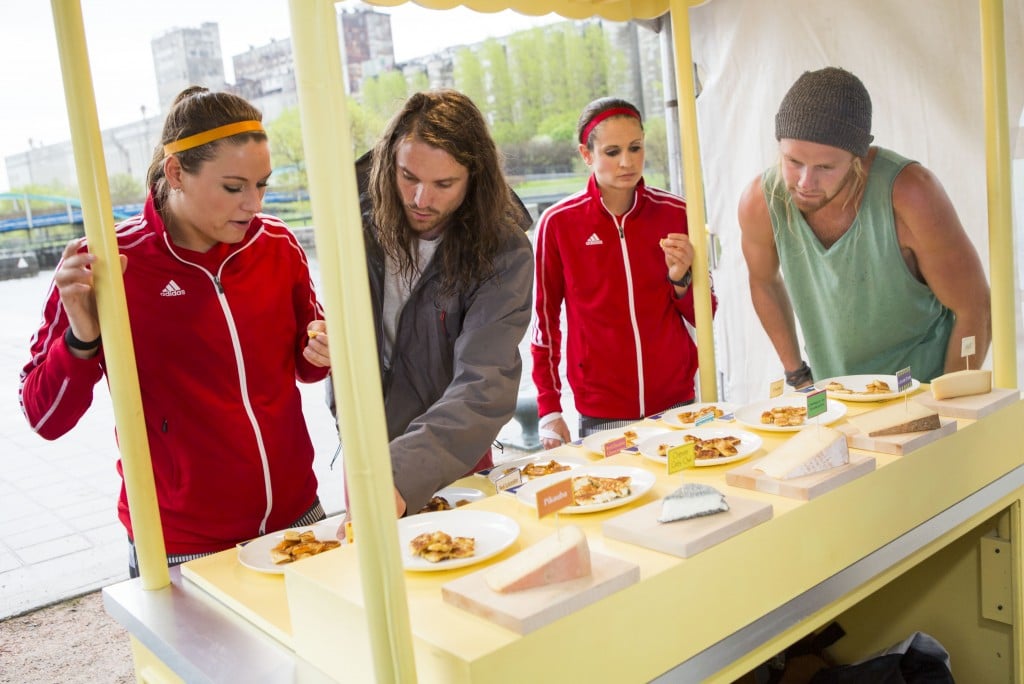 The Amazing Race Canada snuck a third non-elimination leg—yes, a third—into this summer’s elongated season on Tuesday night, sparing Ryan and Rob the humiliation of going home because they’d tried to strip in Montreal.

This marks the second time Jon Montgomery has saved the Vancouver co-workers, and the third non-elimination round in nine legs. This season, they’re coming almost as frequently as Olympic gold medallists Natalie and Meaghan’s first-place finishes.

That said, until the non-elimination fizzle, Montreal had actually been a pretty interesting racecourse. (Although, in true Montreal fashion, all the teams got stuck in traffic.)

Professional stuntman Alain surprised himself (and his exasperated new fiancée) by struggling to perform car stunts on a rain-slicked racetrack, Jinder once again urged a French cab driver to go “rapido,” and everyone ate their body weight in grilled-cheese sandwiches as they tried to distinguish between the different types of cheese.

“If eating grilled cheese was an Olympic sport, we’d be Olympians,” Mickey and Pete declared when they completed the Detour first.

The producers even tickled our funny bones, planting a Fast Forward challenge that required teams to pose for a portrait together—with the surprise twist that they’d have to strip naked for it.

Awkwardly, the two teams to attempt it were not used to seeing much of each other’s skin: siblings Sukhi and Jinder and co-workers Ryan and Rob.

“I don’t even know how we’re going to explain this to Mom and Dad,” Jinder said to his sister Sukhi, as they awkwardly stood naked together. “Thank God we didn’t pick one of the intertwined poses.”

Fast Forwards are high-risk, high-reward, and the embarrassment was worth it when Jinder and Sukhi won the Fast Forward, allowing them to bypass the rest of the challenges and place first.

This meant Ryan and Rob had to turn back and complete the regular race, starting way behind the other teams.

“Right now, it’s not looking too good,” Rob admitted, as they took off to the grilled-cheese challenge.

By the time they arrived, a bickering Natalie and Meaghan were ripping the bread off the grilled cheese to try to focus on each cheese’s flavour: “They all taste the same!”

But in the end, that entire intense hour of television made no difference in your office pool.

Mickey and Pete came in second this week, Natalie and Meaghan took third, and Audrey and Alain finished fourth.

Then Ryan and Rob—who had legitimately messed up, by challenging Jinder and Sukhi for the Fast Forward when the siblings had a strong head start—finished hours later, after nightfall. And yet they still get to stick around.

I can’t think of another reality show that has random non-elimination rounds like The Amazing Race. Survivor? Big Brother? You can win immunity, but you can’t stop somebody from going home each week. That’s how it should be. Viewers watch competitive reality shows to see the strongest survive, not to see the results nullified by a goofy gimmick.

Last year, it was Tim Sr. and Tim Jr., who, controversially, went on to win the whole race. This year, it’s Ryan and Rob, who admit it doesn’t sit quite right with them: “We almost feel like we don’t deserve another chance,” said Ryan. “But we’re gonna take it.”

That means all five teams head to Charlottetown next week for some Confederation fun.