In the end, it was a classic underdog story. 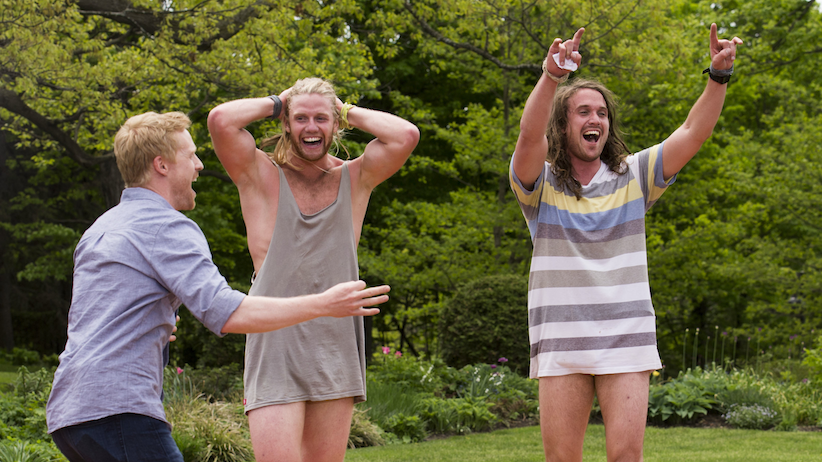 In the end, it was a classic underdog story: the dudes from Muskoka whom everybody loved but nobody took seriously beat two Olympic athletes to The Amazing Race Canada‘s finish line.

There, at Ottawa’s Rideau Hall, the victors celebrated by whipping off their pants.

“I’m not going back to the oil rigs!” cheered his teammate, Mickey.

For a minute, everything was perfect. Mickey and Pete had just proven that nice guys can finish first: Their primary strategy on the race seemed to be hugging everyone they met.

But then, Olympians Natalie and Meaghan came running toward the finish line, holding hands. They’d been only a minute behind.

The only thing off about this underdog story is that—unlike when Russia loses to Finland at hockey—there’s no joy to be taken in Natalie and Meaghan’s loss. They had earned this win. They spent most of the race miles ahead of the pack. Meanwhile, neither Mickey and Pete nor Ryan and Rob had won a single leg.

“You guys crushed Season 2 of The Amazing Race Canada,” host Jon Montgomery told the Olympians at the mat, while all of Canada nodded in agreement.

“It’s a little upsetting not to win,” Natalie admitted.

So what went wrong? When they had finished in first place in New Brunswick last week, Jon asked the women what they’d need to do to win the finale: a flawless leg, they replied.

They didn’t have it in Ottawa. Mickey and Pete did. They overtook the Olympians at the rafting challenge and never looked back. They’d been saving everything for the leg that mattered most.

Our nation’s capital has never looked so electrifying as it did on Sunday night. From river rafting, to traversing the atrium ceiling at the Museum of Nature, to a couple of truly authentic Ottawa cab rides (one driver got lost, one cab broke down), this was an exciting leg full of planned and unplanned challenges.

The turning point in the race was when Natalie volunteered to take the roadblock at the Diefenbunker Museum, assuming it would be a physical challenge. Meaghan, who played through February’s gold-medal game with a broken hand, is still nursing the injury and has been taking the mental challenges on the race. But the women were mistaken. The Diefenbunker was a maze hunt, and it was the next roadblock—at the Museum of Nature—that required a team member to use muscle power and ascend a rope. Meaghan, impressively, powered through it, but she wasn’t able to catch Mickey.

In true Amazing Race Canada form, this leg included an excessively patriotic challenge where the teams had to search through the Hansard debates in the House of Commons and identify important parliamentary milestones, such as the adoption of the flag and O Canada. Shockingly, they weren’t forced to sing the anthem under the flag on the spot.

While Mickey and Pete set the pace in Ottawa, anyone could have won this; all three teams were at the final challenge at the same time, piecing together their 40,000-km trip through a series of paintings. Ryan and Rob had only one mistake on their very first attempt, meaning this was almost a complete come-from-behind victory.

As the grand prize winners, Mickey and Pete won a year’s worth of travel on Air Canada, two Chevrolet Silverados, gas for life and $250,000.

Here’s some comfort for Meaghan and Natalie’s fans: Because they won seven legs, Natalie and Meaghan are taking home $20,000, plus trips to Europe (two of them), the U.S., Tokyo, China, Hong Kong and South America.

But someone really needs to make sure Meaghan rests her hand somewhere in there. They have another competition to win in four years.