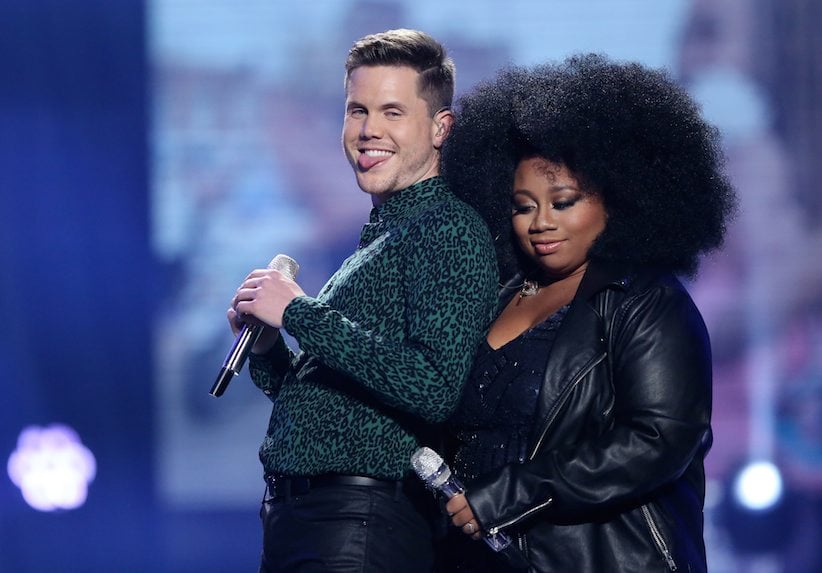 LOS ANGELES — The first “American Idol” finale in 2002 was a battle of the sexes, with Kelly Clarkson the victor over Justin Guarini. The last contest settled the score as Trent Harmon defeated La’Porsha Renae for the crown.

Harmon tumbled to the stage in surprise as host Ryan Seacrest announced him as the 15th and final winner of “American Idol,” which ended its remarkable run Thursday.

“I know that I have a God-given ability, but I didn’t want to take it for granted. I wanted to work so, so hard, and she pushed me to do it,” a tearful Harmon said of Renae, who stood poised and smiling by his side.

Harmon, 24, who described himself as just a “dude from Mississippi,” waited tables at his family’s restaurant in Amory before trying out for “American Idol.”

He won viewers over with his supple vocals and increasingly assured stage presence, and they voted him into history as the show’s last champion. Harmon earned a record contract along with the honour.

Renae, 22, also from Mississippi, the town of McComb, is a single mom who inspired viewers with her triumph over domestic abuse as well as a richly powerful voice.

“American Idol,” once a ratings powerhouse that influenced TV and music, had suffered steady audience erosion before Fox decided it would end this season.

Series executive producer Nigel Lythgoe promised the finale would celebrate its large ranks of contestants, not big-name guests as in previous years, and he stuck to that pledge.

The show opened with a harmonizing chorus of white-clad winners and contenders including Scotty McCreery, Taylor Hicks and Diana DeGarmo.

Judges got in on the act as well. Keith Urban and Underwood dueted, while Harry Connick Jr. saluted a music centre in New Orleans’ Katrina battered-Ninth Ward by inviting a young student, Marley Fletcher, to join him on “It’s a Wonderful World.” Jennifer Lopez performed her new single.

There was a brief nod to nostalgia, with clips from past auditions presided over by original judges Simon Cowell, Paula Abdul and Randy Jackson. Abdul and Jackson showed up to salute Seacrest for his longevity, with Cowell strolling on stage belatedly to steal the spotlight.

President Barack Obama was the unexpected opening act. In apparently pre-taped remarks, Obama congratulated the show on its long run and noted that it motivated millions of young people to vote for contestants.

Then he made a pitch for Americans to demonstrate that same eagerness at the polls, calling voting the most fundamental and sacred rite of democracy. “I believe it should be almost as easy as voting on ‘American Idol.’ And we’re working on that,” Obama said.

“American Idol” debuted in June 2002, during the summer broadcast doldrums, an indication that Fox didn’t have high hopes for the imported singing contest based on producer Simon Fuller’s hit British series, “Pop Idol.”

But the show proved a revelation. Viewers ate up the contestants’ performances and personalities, good, bad or downright ridiculous. They relished the bickering of Cowell and Abdul and, from Jackson, the reassuring familiarity of the trademark “Dawg” that prefaced his critiques.

With Fox carefully protecting “American Idol” as a once-a-year event, the show’s ratings zoomed and its influence did as well.

While America has long embraced the idea that everyone is a potential star — that means you — “American Idol” coined an updated version of the dream. Its nationwide tryouts opened the door to people in big cities and small towns and made the shot at fame and success democratic by letting fans weigh in.

Fox’s competitors responded. The networks that were increasingly favouring reality shows over scripted dramas began searching for their own talent show hits, spawning everything from skating to dance contests.

Some remain, such as ABC’s “Dancing With the Stars” and NBC’s “The Voice,” which overtook the aging “American Idol” in the ratings.

No other TV talent show has achieved the same track record of fame for contestants, although the power of an “Idol” win ebbed in recent years. But dreamers didn’t let go, with about 75,000 people swarming to auditions in five cities this season.

The show’s ratings slumped, the fate of even durable TV performers. “Idol,” which averaged more than 30 million weekly viewers at its 2006 peak and ranked No. 1 for nine consecutive years, averaged about 11 million last season (still enough by today’s standards to land it in the top 20, but with fewer advertiser-favoured younger viewers).

It’s pulled about the same viewership this year, despite its well-publicized farewell season.