Anatomy of a Scene: Cottage-country comedy ‘The Lake’ 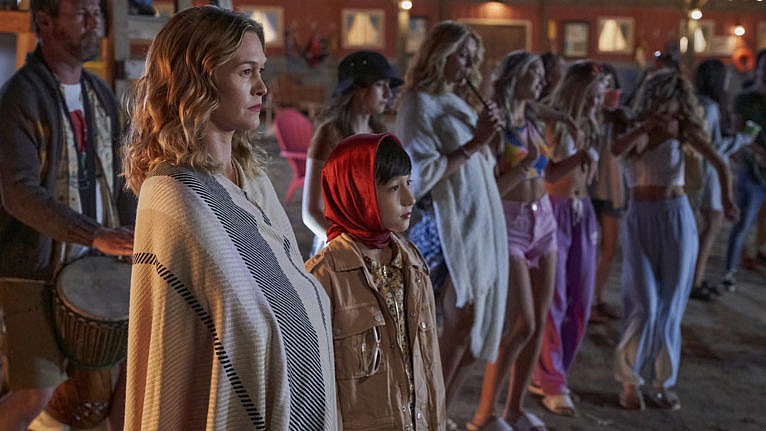 Set in northeastern Ontario, Amazon Prime Video’s new eight-episode series The Lake is a cottage-country comedy loosely based on writer Julian Doucet’s life. The show follows Justin (Jordan Gavaris), who returns home to Ontario from Australia for the summer to reconcile his relationship with 16-year-old Billie (Madison Shamoun), the daughter he gave up for adoption when he was in high school. Upon learning his late father left the family cottage to his stepsister Maisy-May (Julia Stiles), Justin sets his mind to scheming her out of the property. Here, Gavaris, Stiles and Shamoun discuss the hijinks that ensue.

After Billie drinks too much at a community event, Justin tries to divert attention by challenging Maisy-May’s husband to a “tilt”—a camp game that involves jousting your opponent off their canoe. The stakes are high: the winner gets to keep the cottage. In the scene pictured above, Stiles’s character watches stonily from the sidelines with her son Opal. “I’m strategizing about plan B, plan C, how we’re not going to lose the cottage,” Stiles says. “I want my stepbrother to lose. That’s pretty much Maisy-May’s MO.”

Filmed in North Bay, Ontario, the show didn’t use soundstages but relied on the natural beauty of Lake Nipissing. “I hope people can see the lake is really a lake and not a green screen; everything you see is 100 per cent real,” says Shamoun. She likens the experience of filming on location to summer camp. Gavaris, who grew up near Toronto, also appreciated the scenery. “Showing up to work and knowing if you turn, you’re positioned way up on a bluff, looking out over the lake—it was quite spectacular,” he says.

The cast stayed on location for the duration of filming, immersing themselves in local traditions. For most of their tilting scenes, Gavaris and Shamoun performed their own stunts. “Any time you see me hit the ground, I hit the ground—with gusto!” Shamoun says. Stiles found Canadian cottage communities fascinating on a social level as well—something the show takes care to depict. “When you’re on the lake, it’s the only lake on the planet to these people,” she says.

There was plenty of room for the actors to contribute to their characters’ looks. One challenge with Maisy-May’s costumes was that Stiles was four, five and six months pregnant during production. “That’s where Maisy-May’s kaftans came in,” she says. Gavaris says his costumes evolved along with his character: “When you first meet Justin, he’s in the hat and the Jacquemus shirt, and it’s all a little Bondi Beach,” he says. “Then, as we get further into our story, his outfit becomes a little more cottagey.”