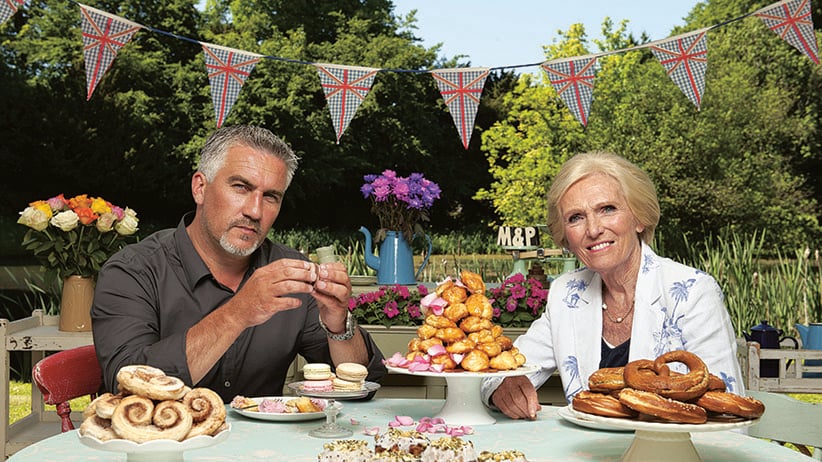 ‘The Great British Bake Off’ is drama-free and simple—but it’s proven to be extremely successful, launching hosts Paul Hollywood and Mary Berry into celebrity.

The British have always had a sweet tooth, but this summer the nation is on a sugar high. This month saw the season premiere of The Great British Bake Off, a hit reality show now in its fifth season on BBC. The program—which features a typical reality format of 12 contestants, two judges (one posh but kind, one middle-class and sharp), a lot of swelling music, to-camera interviews and a pair of goofy hosts—has proved not only a mainstay but a bona ﬁde cultural phenomenon.

With the show’s recent move from BBC Two to the nation’s main network, BBC One, ratings soared to nearly eight million. So a huge swath of the population actually sat down to watch a bunch of very regular-looking folks—builders, pensioners and even a spotty high school student—attempt to make their best Swiss rolls and chocolate cherry cakes. No singing, no dancing, no screaming studio audience or glitter-dusted pyrotechnics, just a simple white tent, a dozen gas ovens and a boatload of icing sugar. There is no cash prize to compete for, just the unofficial title of Britain’s greatest amateur baker.

So why is it such a big deal?

Stuart Murphy, director of Sky TV’s Entertainment channels, says the show has an alchemy he’s rarely seen in his career as a broadcaster. “It sounds a bit mad to say this about a show about cakes, but I think it’s essentially about values. Britain today isn’t sure what it stands for. Politically, we don’t know where we are; everyone is disengaged. Bake Off reflects a version of Britishness everyone can agree on.”

Sky (which is owned by Rupert Murdoch) recently acquired Love Productions, the independent production company that created and produced the show for the BBC. The landmark deal, rumoured to be in the tens of millions of dollars, shows what a lucrative property The Great British Bake Off has become—and how deeply it resonates. So far, the show’s format has been successfully exported to 14 other countries, including the U.S., Australia and France, and more foreign sales are likely to follow.

“Basically, it gives a simple, digestible version of Britishness,” says Murphy. “It’s a bit dated and nostalgic—bunting and stately homes and buttered scones—but it’s also about family and community and villages and regular people who are triers and enthusiasts. The show takes something seemingly trivial and shows how if people become really obsessed, something beautiful can result.”

One thing that sets Bake Off apart from most other hit talent shows, be they about cooking, singing or hysterical wannabe models, is its buttoned-down restraint and common decency. While the show has produced its fair share of stars—the judges Mary Berry and Paul Hollywood are now massive celebrities and bestselling cookbook authors, while previous winners have gone on to write cookbooks and make appearances on chat shows—it is not strictly personality-driven. There is much more discussion of soggy bottoms and batter than of the contestants’ back stories, and all the contestants are genuinely nice to each other. There are no opportunities for sabotage, and emotional melodrama is kept to a minimum. “The interesting thing about it is that it’s really just about the cakes,” says Phil Hogan, TV critic for the U.K.’s Observer newspaper (its sister paper The Guardian, like most of the major dailies, live-blogged the opening episode). “It’s got rid of lots of the synthetic emotional tactics and humiliation and noise that people were sick of with cooking reality shows. And it makes sense, because there’s just something inherently genteel about baking. For one thing, it’s not a performance. But there’s suspense because you don’t know if it’s going to work out until you take it out of the oven.”

And, of course, there is the inherent appeal of baked goods—cakes, pies, biscuits and other sweets—that resonates so deeply with Brits from all walks of life. Britain is a nation of cross-class cake-eaters, as any trip to your local Tesco pastry aisle or Fortnum & Mason’s emporium of high-end sweets will reveal. One of this year’s most promising contestants, Richard, a builder from North London who impressed the judges with his spectacular Swiss roll, encapsulated the sort of sheepish modesty viewers have come to love about Bake Off contestants. “Mary is very posh and, against that general upper-middle-class background, you’ve got these regular folk trying to show that they can do better than people slightly up the class chain,” Murphy explains. “So in that sense, it transcends class. Unlike singing or dancing, baking is within touching distance. We can all bake a nice cake if we put our mind to it.”