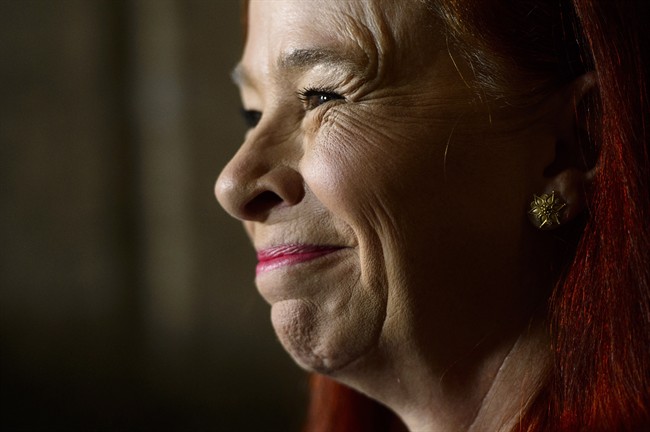 Catherine Tait, smiles as Heritage Minister Melanie Joly, announces that Tait is the new president and CEO of CBC/Radio-Canada during a press conference in the foyer of the House of Commons on Parliament Hill in Ottawa on Tuesday, April 3, 2018. THE CANADIAN PRESS/Sean Kilpatrick

OTTAWA – Catherine Tait, a 30-year veteran of the Canadian and U.S. television and film industry, has been tapped to lead a digital revolution at CBC/Radio-Canada, becoming the first woman in the organization’s history to be named president and chief executive.

Tait, who will officially begin her five-year term at the public broadcaster in the summer, called the position a dream job during a Tuesday morning news conference on Parliament Hill alongside Heritage Minister Melanie Joly.

Tait said she wants the broadcaster to increasingly think digital in order to deal with the ongoing disruption across the broadcast industry — a symptom of evolving technology and consumption habits that allow consumers to access content anywhere and any time.

“There is nothing more important than local stories and local news. It will be absolutely central in what we will do going forward.”

The CBC needs to remain relevant to the many audiences it serves, she added, calling on the Crown corporation to be an inclusive storyteller for Indigenous Peoples, women, newcomers and LGBTQ communities, as well as a creator of quality local content.

“CBC/Radio-Canada, along with public broadcasters around the world, are under significant competitive pressure,” Tait said.

READ: Why the CBC has outlived its usefulness

“In order for public broadcasters to survive and to flourish, we must flourish on the services, news and programming that most connect with our public — not just as one audience, but as many audiences. This is, after all, the power of digital.”

Tait didn’t provide many additional details of the changes she hopes to see at the public broadcaster. She said she had some ideas about the direction she wanted the CBC to take, but first wanted to talk with outgoing president Hubert Lacroix and other executives.

Tait, 60, is no stranger to the CBC. She is a former president of Salter Street Films that produced a CBC mainstay, “This Hour Has 22 Minutes,” and more recently saw a company she co-founded, iThentic, partner with the CBC to create a 10-part, online series.

Best wishes to Catherine Tait on her new post as President of @CBCRadioCanada, and becoming the first woman to take on the job.

Her appointment was supported by industry groups like the Canadian Media Producers Association, who said Tait is “not afraid to innovate” and should keep the CBC “relevant and connected” to younger audiences. Daniel Bernhard, executive director of the advocacy group Friends of Canadian Broadcasting, said he was optimistic about Tait’s tenure, but needed to wait and see how she changes the CBC.

The chairman of the committee that recommended Tait and others said she was the more audacious of the names that were put forward. Tom Clark, a former journalist, said Tait talked about some innovative and achievable ideas to implement at the public broadcaster and showed an understanding of the CBC and the challenges it faces.

“She got not only who the CBC was and what it means to the country, but she also got the extent of the challenges — and challenges is a small word for a really big problem,” Clark said.

“The reimagination of the national public broadcaster at a time when broadcasting is disappearing is a monumental task. She got both sides of the equation right.”

Tait’s appointment is the latest in a series of moves the Liberal government has made at the public broadcaster that began in 2016, when it boosted funding to the CBC by $675 million over five years.

The first tranche of money, about $75 million, moved last year. This year, the funding doubled to $150 million, a level that will continue through to April 2021. Joly said the CBC has been investing the money “bit by bit.”

But the union at the CBC has raised concerns that the money, partly tied to boosting local content, has largely gone to outside production companies like the ones Tait led. The Canadian Media Guild (which also represents unionized workers at The Canadian Press) worries the new money from the federal government wasn’t a reinvestment in the CBC so much as spending on companies producing CBC programming.

Jonathan Spence, the union’s branch president for CBC/Radio-Canada, said he hoped the new board and chief executive would rethink how the extra federal dollars were being spent.

“Our concern is that if we continue to see increasing amounts of money going towards the independent production community, that may reflect a priority over local news and local programming,” he said.

Pressed on the issue, Tait said that producing local content would be central in everything the CBC does.

The board of directors is also receiving a makeover. On Tuesday, the Liberals announced the appointment of three new directors, and named Michael Goldbloom, an academic and former journalist, as chairman of the board.

The government launched an overhaul last year of how members of the board of directors are chosen — a response to complaints that the selection process was open to political interference and did not reflect Canada’s diversity.

“The CBC is at a turning point and we have the right management team, the right board to ultimately seize the opportunities that are out there,” Joly said.

Note to readers: This is a corrected story. A previous version had the incorrect name for the advocacy group Friends of Canadian Broadcasting