The Newfoundland comic has found a following in the rest of Canada, to the chagrin of some locals 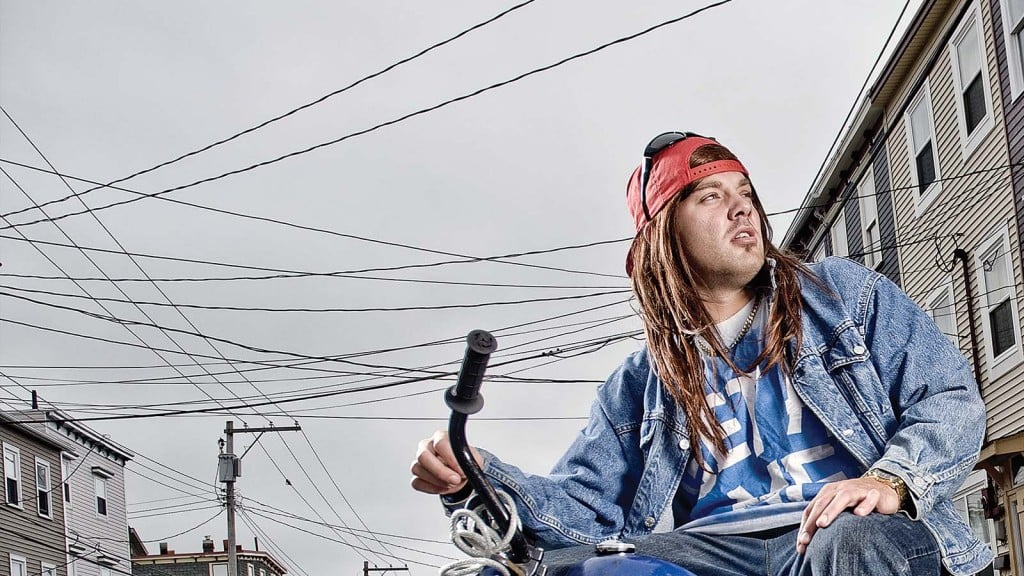 On a mid-September evening in St. John’s, tucked back in a corner of a bar, Donnie Dumphy is running a hand through his long, rust-coloured hair. “I could go now, take the wig off and sit down here, and not one person would recognize me all night.” It’s like Clark Kent, he says.

These are the dual worlds of 35-year-old Leon Parsons, who’s turned a few years worth of YouTube comedy videos into a feature film with a $1-million budget and a cross-country tour. Parsons has been screening How To Be Deadly the way a rock band tours an album: meeting fans, signing merch, doing Q&As after each show. He also hosts after-parties in bars from Grande Prairie, Alta., to this one, here in Parsons’s home town.

On this night, they’re about halfway through the tour, when Parsons’s co-star, Gina Squires (who plays his on-again, off-again girlfriend, Brenda), taps him on the arm, cellphone in hand, to say they’ve just sold out the film’s Toronto screening as well. Parsons flashes a smile and shakes his head. “Wicked,” he says.

To mainland Canadians who come across his YouTube videos, Donnie Dumphy must be an enigma, wrapped in a riddle, stuck inside a can of Vienna Sausages. Until recently, most Newfoundlanders assumed, quite reasonably, that Dumphy, with his fetish for wolves and rap battles, was one of those island-only commodities, like Purity Syrup, that would remain here, marooned forever, incomprehensible to the rest of Canada. Unless you grew up around people like Dumphy, you may not understand a word coming out of his mouth, and that’s aside from his gib (as in “gibberish”) rap, with lines like “Fukaka-king kon/ San ka binka fu fon.”

Newfoundlanders understand Dumphy, of course—some all too well. “I don’t see the appeal, myself,” said a prominent radio personality who heard about this article. One Facebook friend just wrote, “Ugh.”

In a Globe and Mail column titled “Republic of Doyle is the republic of us,” TV critic John Doyle called that show’s setting “thrillingly exotic.” Newfoundland is that, but Dumphy’s world is another St. John’s that only townies recognize: Drinking, working some dead-end job, and living in the less-scenic vinyl row-houses of downtown (the part of town Deadly’s director, Nik Sexton, has dubbed “Pajama Town,” where people wear pajamas all day long).

That Newfoundland surfaces for the rest of Canada every now and then, to the chagrin of some locals. A decade ago, Mary Sexton, Nik’s mom, produced the short-lived CBC show Hatching, Matching and Dispatching, a crude and hilarious series about a Newfoundland family who run one outport’s bridal, funeral, and ambulance operations. There was a definite backlash then, too, Mary says. Sensitive Newfoundlanders, still reeling from Margaret Wente dubbing Newfoundland a “scenic ghetto,” were griping on phone-in shows that Hatching bathed the culture in a harsh light, with characters who did no real work. “But they were working!” Nik almost shouts. “They ran three businesses!” If you can’t step back and laugh at yourself, “there’s something radically wrong with you.”

“Donnie Dumphy is actually three people,” Parsons says. He’s joined by two fellow Newfoundlanders, director Sexton and their long-time friend, Ian St. Aubin, who writes much of the music for Internet hits like Havin’ a Time, with 1.7 million views. “We did it for friends at first,” Parsons tells me, “then we put some subtitles and all the Mainlanders got it.” He and Sexton met in high school, where, Sexton says, they would often skip school and hang out downtown, in a food court unironically called “Ports of Food.” The security guard was on the watch for loiterers, so “when your coffee was gone you’d fill it up with water,” Sexton says. “All we wanted was a skateboard park. Who knew when we got one it would take all that away?” Now, kids are dropped off to skateparks in their parents’ minivans.

That nostalgia in his voice is recalling the St. John’s of the ’90s. Charming but never glamorous; no prix fixe at Raymonds, no Toronto-roasted coffee, and (practically) no tourists. St. John’s has changed, and Sexton, who’s lived in Toronto for years, expresses bemused outrage. “Now it’s all Tilley hats and binoculars!”

How to be Deadly takes a John Hughes-styled approach, paying homage to that earlier Newfoundland, but some things are getting lost in translation. In a CBC interview, the host of Q, Shad, pronounced “deadly” as if it were a movie about assassins, instead of dirt bikes and girls. Parsons says people ask him, “ ‘What does deadly mean?’ Deadly . . . perfect . . . wicked,” he answers. “They’re like, ‘What’s wicked?’ ” he cackles.

Donnie Dumphy fans know. Sample audience questions from the Q&A in St. John’s: “How many Honda 50s were damaged in the movie?” (Donnie “loves doin’ wheelies” around St. John’s on his mini-dirtbike.) A follow up: “Will Brenda ever get to drive the Honda 50?” “She drives it every night!” Parsons says. Classic Dumphy.

After the screening, Sexton is helping clear the merch table, when staff come out of the theatre, one girl holding up a clear garbage bag. It’s half full of Bluestar and Jockey Club beer cans. Classic skeet, Parsons might say.

A server comes by with a tray of amber shots. “What is this?” Parsons asks.

“Right on,” says Parsons. Down the hatch.

What is a skeet, exactly? A scofflaw scraping through life by any means necessary, without regard for social norms, rules, or remotely current fashion trends. A skeet is generally money poor (though you can be a rich skeet), not terribly well educated, but also idolized. “People think you’re putting Newfoundland down,” Sexton says. “That’s the last thing I wanted to do!” If you grew up in St. John’s, he says, “We all had our skeet impressions. It’s part of the fabric of life here.” Parsons puts it this way: “When you go to the heart of the heart, we’re all skeets. We’re Newfoundlanders. I actually clawed my way out of it.”

Parsons is rarely recognized in town, but when he is, it’s in hardware stores. “They look at me, like, ‘Man, you him?’ ” At screenings across the country, fans shake his hand, and tell him, “I can’t believe you’re here!” Sexton says Parsons changed his style. “He was doing Dumphy all the time.” People would approach Dumphy and get a “Get away from me, b’y!” He still often plays tough in videos—“Man, ’dose gangster rappers got nudding on me, I been shot, stabbed, butter-knifed . . . Becel’d,” goes one song—but it’s hard not to notice how gentle Parsons is now, leaning in for a picture, some with grandmothers, others with teenage girls, his hand barely grazing the kids’ shoulders. People used to ask him if the hair was real and he’d say no. “But one time a kid asked me that and when I said ‘No,’ he cried.” Now he just says yes.

Sexton says Parsons has changed in other ways. “Years ago when we started this thing we were doing Toonie-Tuesday [at KFC].” Sexton smiles. “Now he’s growing kale.”

But not everything has changed. “I’m very resourceful,” Parsons says. “I plow snow in the winter, I sell fish, I grow vegetables. I basically live off the land. My last job was Sobeys when I was 18.” Parsons has also worked here, on George Street. “I bounced two days a week. I’d go to work Friday night and come home Monday morning.” He worked construction (“I can build you a house!”) and went to cooking school. “My woman gets a five-star meal every night. I get local lamb, local beef. I grow organic beefsteak tomatoes. They’re amazing, man.” You can practically hear the eyebrows of Newfoundland rising in surprise.

Unlike his predecessors, such as the Codco folks, Donnie Dumphy isn’t politically minded. He’s too busy sitting in a drunk tank, or minding his addictions to Ritalin and mini-dirtbikes. But Parsons, the man, is a different story. He brings up chemicals in fish farms (“They’re f–king frankenfish now”), Newfoundland’s shaky oil-rich economy, and the potential environmental impacts of Muskrat Falls. This kind of talk earned Parsons a surprise 2011 phone call, when he posed as Dumphy for a picture with former premier Danny Williams. Parsons says he posted it on his personal Facebook profile, with a lewd comment that Williams may not have not appreciated. Shortly thereafter, the phone rang.

“Danny Willlllliaaaammms,” Parsons answered—ready for it, as if the premier were his nemesis in a movie. Parsons says the call lasted eight minutes, and according to his version, at least, he did a lot more dishing out than the former Rhodes Scholar expected. “I read up on everything,” Parsons says. “I’ll be in politics one day, I guarantee you that.” He laughs. “I got no retirement, right? So I need a pension.”