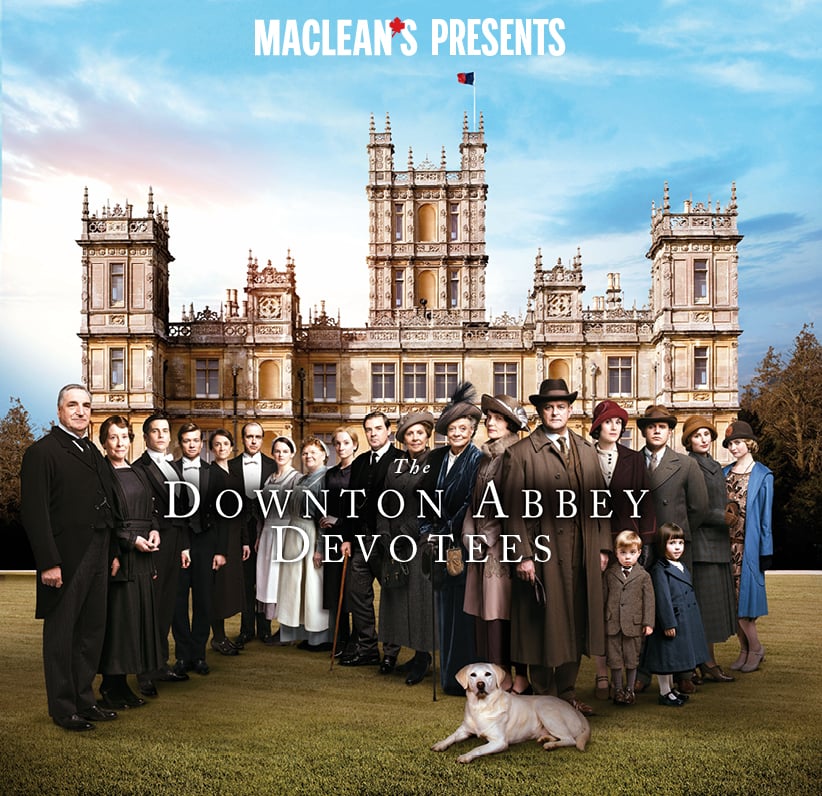 We bid you welcome to our weekly blog, Downton Abbey Devotees. We would be remiss if we did not caution that Downton Abbey secrets, even gossip, will be revealed in below writing. We are concerned that the revelations may trigger a splenic attack for those unfortunates who haven’t seen the new episodes. Perhaps they should depart forthwith?

Patricia: My hopes for a good season 5 just went up after watching episode 2. It was full of twists, turns and enough quips to re-float the Titanic. The underlying theme was the importance of having, and keeping, an unblemished reputation. Any scandal, even a hint of impropriety, could mean not just social disgrace but the difference between working in a grand country house and in a laundry. Yes, we’re looking at you, Baxter—on intriguing back-story scale, you rate an 11. For aristocratic women, that absolutely, positively meant no hanky-panky outside of marriage. Which explains why the season 1 death of Kemal Pamuk in the bed of the then-unwed Lady Mary had to be concealed with a bit of “move the body in the middle of the night” stealth.

So it’s shocking—shocking!—to find out she’s going away with Lord Gillingham for a naughty week to test the compatibility waters before deciding if she’ll marry him. Yes, times are changing, as Mary makes clear, but that doesn’t extend to damaging her reputation. She wants the sex, but not a possible pregnancy. Afraid she’ll be recognized if she buys contraception, she sends off dear, devoted Anna to the pharmacy, with a cutting, “Oh, no one will recognize you.” Mary certainly is coming out of the fog of grieving for dear, dead Matthew. She flings biting bon mots at everyone from Lady Edith to her old flame Charles Blake.

Genna: All that sniping convinced me that Mary is back to her old (prickly) self, which means, I hope, that we can expect more scheming and machinations from her this season. I was getting rather tired of sad Mary.

Poor, poor Anna. She was totally blindsided by Mary’s request. And when she’s already about to die of shame in the shop, the druggist’s wife gives her a hard time, interrogating her about her marital status and tartly remarking “there’s always abstinence.”

This scene confirmed for me that Downton is still fundamentally a 19th-century institution. Anna has been part of it for all her adult life. If you were brought up under the tutelage of Mr. Carson and Mrs. Hughes, the idea of unwed, consequence-free canoodling wouldn’t occur to you either. When she finally figures out what Mary’s asking, Anna delivers my personal favourite line of the episode: “Honestly m’lady, you better hope I never write my memoirs.” The two of them are loosening up in each other’s company. They’re becoming friends. Which means the maid can give a little bit of cheek, when it’s warranted, to her mistress.

This was the second time the inflammatory work of Dr. Marie Stopes appeared at Downton. In season 4 Mrs. Hughes confiscates a copy of Married Love from the wanton, wicked housemaid Edna. You can read the entire thing online (it’s in the public domain) and chuckle at what passed for science in 1918. Mary’s book, which isn’t named in this episode, could be Stopes’s contraceptive/eugenics manual, Wise Parenthood. And mark my words it’s the Chekov’s gun of contraceptive-related subplots. Someone’s going to find it, and hijinks will ensue.

Patricia: As well as just finishing a cup of tea, I’m listening to Elgar’s Pomp and Circumstance Marches as well as the Enigma Variations while writing these comments. I’m feeling a few twinges of nationalism—what is it about Elgar?—that for a Canadian (which I am) means a craving for activities involving water (liquid or frozen). There’s an Arctic cold snap on right now, so perhaps a bit of tubing down a hill, if there’s enough snow.

Can we talk hats? Because both fellow devotee and I noticed how particularly wonderful the millinery was in this episode. They were soft flowing numbers in velvets and silks that hugged the head and flattered the face. Truly wonderful, especially Mrs. Crawley, who is really coming into her own, fashion-wise. I think her romantic interest in Lord Merton has certainly affected her taste.

I adore how everyone, and I mean everyone, leaving the house wears a hat. Nowadays it’s really only royalty who wear them on a regular basis. And only the Queen who always wears a chapeau. And when she’s not wearing a formal hat, she dons a Hermès scarf. For those hankering for beautiful millinery examples, check out the Canadian-based Royal Hats blog. Its motto, “Following the bold, beautiful, and bizarre world of royal millinery” is apt. She’s just out with her best of 2014.

Genna: You know what makes Mrs. Crawley’s hats so phenomenal? You don’t notice them. They’re not ostentatious. They’re jaunty, and they suit her. Isobel Crawley has mad style.

Speaking of great hats and coats, with the introduction of Sarah Bunting, the school teacher, we get to see 1920s street style for the first time. Nearly everybody’s either a servant or a toff at Downton Abbey. Now, because the big-hearted Mrs. Patmore will be paying Miss Bunting to tutor Daisy, there is finally a regular character who is truly middle-class. Unfortunately, despite her fabulous pink blouse and beribboned hat ensemble, Miss Bunting is the worst. For years I’ve been praying for a ball-busting suffragette to appear in the Downton universe, but, to quote Lord Grantham, we got this “tin-pot Rosa Luxemburg” instead. We get it, lady, you’re a socialist. As the Dowager would say, “Principles are like prayers. Very noble, but awkward at a party.”

You know what, maybe Daisy will end up filling the role I was hoping for from Miss Bunting. I’m thrilled that she’s getting educated. Sophie McShera imbues the assistant cook with so much complexity and mystery. Daisy is the only character that I could see inhabiting her own spin-off show (please and thank you, Downton gods). She’s so much better than most of the half-baked story lines the writers cook up for her. 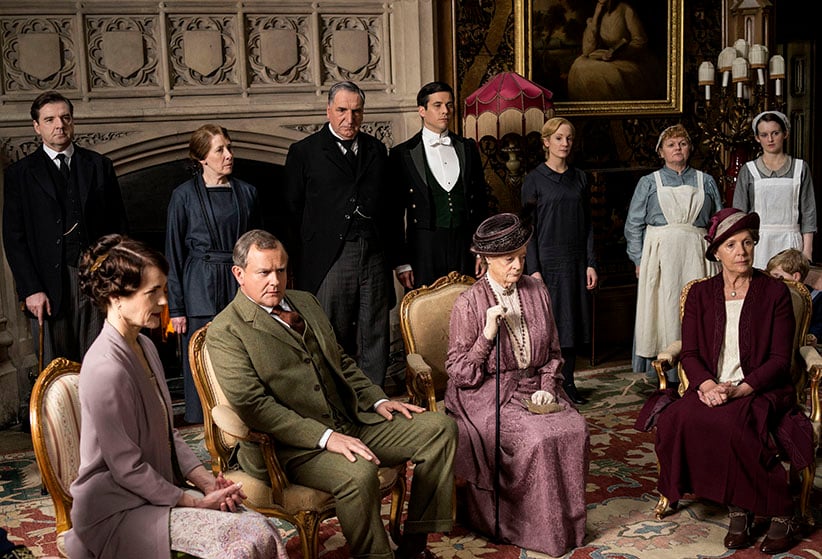 Patricia: With everyone concerned about their reputations, it’s a bit sad to see Thomas, holder of the blackest one, moping around now that Jimmy has gone off to be footman/paramour to Lady Anstruther. Now the only men below stairs are Bates, Mosely and Carson, all well into middle age and all unlikely to be his BFF. (Those anonymous male servants who move carpets, etc., are too beneath Thomas’s standing.) Oh dear, this means he has more time to plot and plan. Watch out, Baxter!

At least Baxter has Mosley in her corner. Still there’s time when the beauty of Downton Abbey gets in the way of a good plot. When Baxter confesses her criminal past to Moseley, I kept looking at the beautifully polished boots, canes and walking sticks of the mud room. Oh my, I’d love to clean my boots there.

Speaking of reputations, his Lordship is grappling with the fact that he’s no longer considered the natural leader of the county. He’s butting his heads with the deferential Mr. Carson, of all people, over where the village war memorial should go.

As they stroll through the central town square to his Lordship’s preferred spot, Carson remarks, “Millions killed, and we remember them with a stone cross from women to stop by and gossip?” That’s the kind of back-sauce he would have given a tongue-lashing to a footman for just a couple of seasons ago.

In an infinitely more interesting development, Mrs. Hughes and Mr. Carson have a concurrent spat about the memorial. And then they practically (but not quite) kiss and make up. Oh my. I’m keeping an eye on these two from now on.

I’ve written before about the dangers of taking Mr. Carson and Mrs. Hughes out of the friend zone. If they get together and it doesn’t work out, what will it mean for everyone else downstairs? Civil war? On second thought, that sounds fun.

Finally, in yet another round of Robert Grantham, vs. modernity, the Earl lashes out at the latest “fad,” radio, with the quip of the episode: “I find the whole idea a kind of thief of life. That people should waste hours huddled around a wooden box listening to someone talking at them, burbling inanities from somewhere else!”

Patricia: Ahh, to see history. Rose finally got her way and the wireless came to Downton courtesy of King George V who was speaking to the Empire. We are so used to such technology that it’s quite funny to realize how revolutionary the radio was in the day. No wonder Mrs. Patmore wondered if it was a two-way receiver and the king could hear them chatting in Downton Abbey.

What also hit home was the formality of the event. Everyone stood politely to hear George V speak. Hey, the powers-that-be didn’t allow the coronation of the Queen’s father to be broadcast in case men heard it in bars, while wearing hats! And that was 1937. No wonder the dowager countess worried about the royal family letting everyone see the magic of the monarchy, bemoaning that it could show that the royal family is just like everyone. “Would that be so bad?” asks Mrs. Crawley. “Yes, if they want to stay at Buckingham Palace,” shot back the matriarch.

Genna: We can’t finish talking about reputations with mentioning Lady Edith, who’s taking a colossal risk with hers. She’s spending an awful lot of time at The Farm Where Nothing Could Possibly Go Wrong, where she has stowed her illegitimate child away less than a mile from her family. Mrs. Drew, little Marigold’s adopted mother, is being kept in the dark about the toddler’s true parentage, but she knows very well that something is up. The side-eye she gave Edith when the lady proposed to become Marigold’s godmother could boil tea and burn biscuits.

Next week: Hopefully we’ll learn a bit more about Phyllis Baxter’s sordid past. As the ever-faithful Mr. Mosley knows, there’s more to her story than simple thievery. And oh dear, is the mysterious death of Green the rapist valet still a plot? We’d hoped it had been consigned to the boxes that contain season 4’s less successful plots. Does this mean Bates is AGAIN going to be accused of murder. Really, how many crimes can one be suspected of committing yet still keep a job as an aristocrat’s valet?