Downton Abbey: Wrapping up a panoply of plots 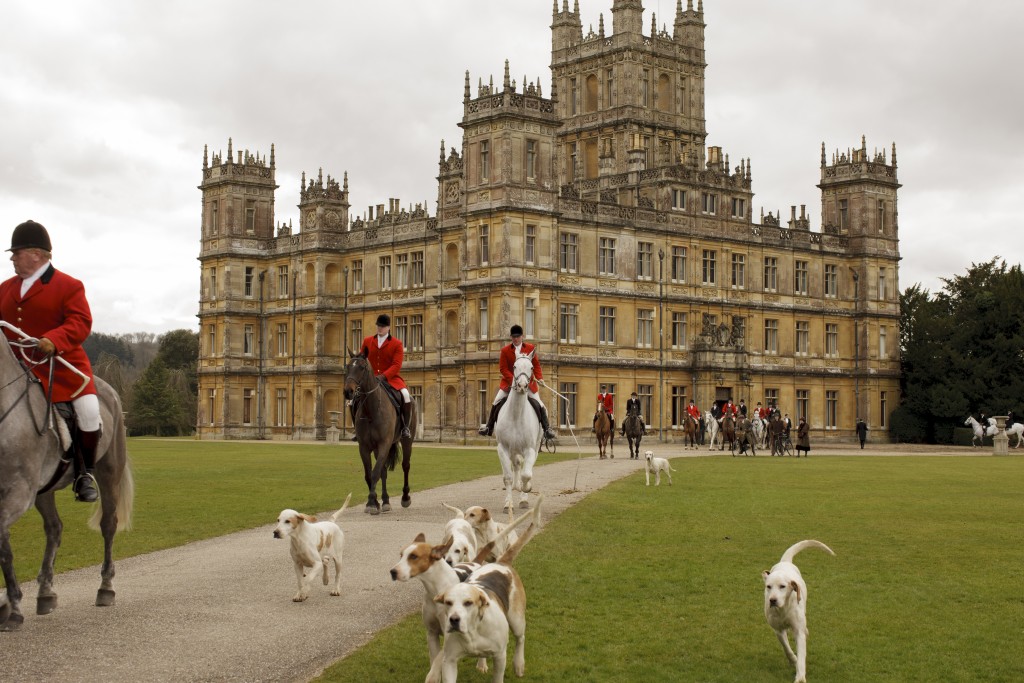 NOTE: this blog contains spoilers for the sixth season of Downton Abbey.

The first episode of the final season of Downton Abbey had the feel of a Ron “But wait, there’s more!” Pompeil infomercial: it’s as if creator Julian Fellowes suddenly realized there are only nine episodes left in his soap opera saga and he needs to wrap up a good two dozen story lines.

What follows is a dizzying panoply of plots. Like the shake-ups at Downton Abbey, there’s been a change at Maclean’s Downton Abbey Devotees (D.A.D.). I’m sad to announce that fellow D.A.D., Ms. Genna Buck, has left the magazine, and thus is no longer my D.A.D. sparring partner. (Though now that Lady Rose, her fave, my irritant, has decamped to America, many of our views on the drama are quite harmonious.) So I looked close to home for a new devotee.

My interest in all things old and historical comes from my mother. There’s nothing more fun than spending a day with her at an antique market, figuring out what items were used for and why. Sometimes a third-hand item is better than anything you find in the stores. My cast-iron pan is from the late 1800s (Cornwall, Ont.) while my dining room sideboard is, in fact, a wooden bureau from an Ottawa Valley post office.

Every year, PBS sends me advance-screening DVDs of Downton Abbey, which I watch over the holidays with Mum. So this year I took detailed notes of what she said, and have slipped her comments and observations into this blog. She’s from a generation not given to publicity, so her contributions will be unattributed (which is what she wants, trust me.)

Related: Our wish list for what should happen on Downton Abbey‘s final season

First: the murder plot is over. Another woman conveniently came forward to confess to pushing the odious valet, Mr. Green, into traffic. Anna is cleared. Oh, thank heavens. Those who have followed this blog know I’m heartily sick of the duelling murder plots involving Anna and Mr. Bates. It seems that Fellowes finally heard the howls of distress from fans and put us out of our misery. Now the couple can get back to worrying about having babies.

A new hiccup in the marriage plans between Carson and Mrs. Hughes. “I don’t know if I can let him see me as I am now,” she worries. So she convinced Mrs. Patmore into asking Carson as to his “marital intentions” (ie. Will they have S-E-X?) Mrs. Patmore flubs her task, leaving the characters confused, and audiences howling with laughter. Soon, all is resolved, at least until the next hiccup on the way to the nuptials.

“Retrenchment,” as Jane Austen once wrote, has come to Downton Abbey. “Neither you nor I can hold back time,” the earl says to Carson. ”Unfortunately,” his butler responds. So, while the peer mixes his own drink, they discuss staffing. When Carson arrived at the stately home there were six footmen and five maids, now there are two of each. The wage bill has tripled since before the war.

It’s Tom Barrow, No. 1 on everyone’s most hated list, who is told to look for a position at other homes. Poor Barrow, his heart may have grown three sizes as he plays with little Master George and Marigold, but is it too late?  Especially now that Denker, the dowager countess’s maid, appears to have brilliantly filled the category of evil servant.

Yet, as if all the plots both upstairs and downstairs at Downton Abbey weren’t enough, there’s a five-minute fillip involving a hotel maid who wants to blackmail Lady Mary over her, gasp, week of sex with Lord Gillingham. It’s over quickly, as her father nips the extortion attempt in the bud, but it leaves this viewer wondering why on earth it even made it to the final cut as it adds a level of complexity and confusion that isn’t needed. 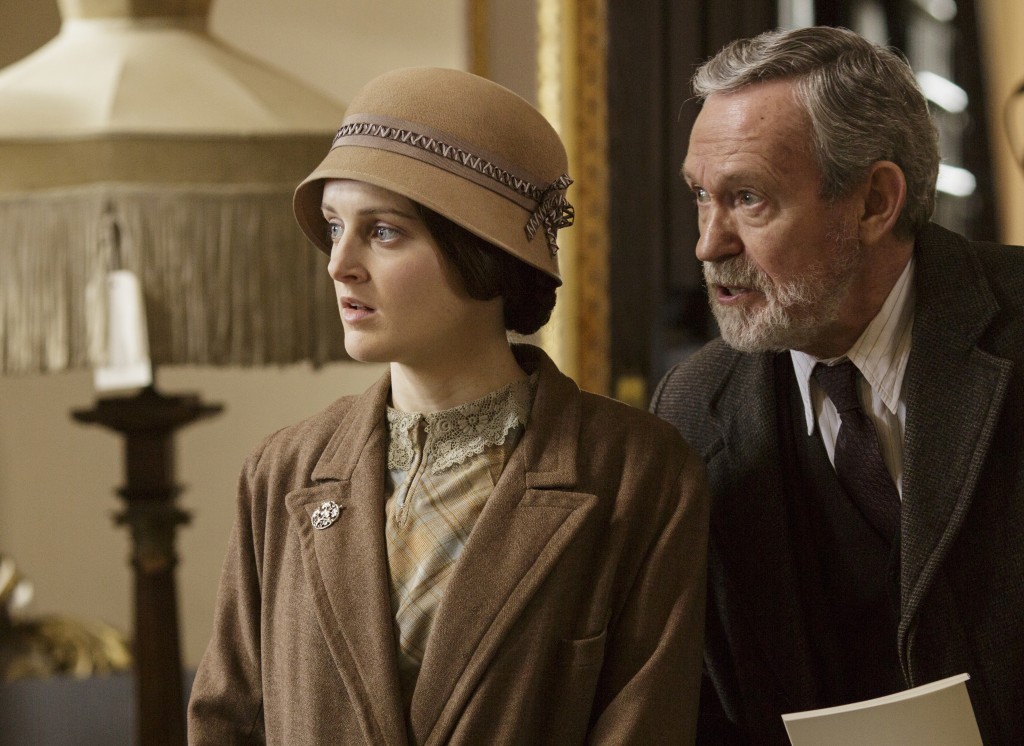 But wait, there’s more! There’s now a crisis involving Daisy’s father-in-law, Mr. Mason. And of course Daisy makes it worse. Behind my irritation at the never-ending murder plots is the transformation of a shrill socialist lacking in all common sense. It seems his tenancy is at risk as the neighbouring estate of Lord John is sold. “This life is over for us,” says the depressed aristocrat as he sells everything, including wedding presents and family portraits. He held on for far too long, and now there’s nothing left. So naturally Daisy goes to the house auction and angrily confronts not just the aristocrat, but also demands the new owner keep Mr. Mason (whose chances just went from nil to zilch.)

That Daisy doesn’t get fired is due to the other new plot device introduced in this episode: the melding of upstairs and downstairs. When Anna is told she’s cleared of the murder charge by the local policeman (who is at the home so frequently he should have an office there), everyone celebrates down in the servants’ hall, including the Crawleys. There’s dancing and champagne, and the bizarre sight of the earl rummaging through the newfangled fridge for a chicken leg that he can gnaw on. While mixing easily with the servants, he couldn’t possibly fire Daisy, now could he? Alas, we know the answer.

While stark social divisions began to blur after the carnage of the First World War, it beggars belief to think a grand earl would have eaten even a snack in the kitchen of his stately home. It wasn’t that long ago that children, once out of the nursery, ate every meal in the dining room. When my old-fashioned grandmother visited our home when I was a child, she was horrified to see that we used the eat-in kitchen.

Luckily, viewers get a reprieve from all those happy relationships thanks to the delightful sniping between the dowager countess and Mrs. Crawley. If there is one thing they both love, it’s the village hospital (well, and Master George). So when the big hospital in York wants to take over their village medical outpost, the dowager sees it as an attack on her power base, while Mrs. Crawley believes it will bring needed technology to the area. Let the battle commence.

“Does it ever get cold on the moral high ground?” the aristocrat asks Mrs. Crawley, who responds that she doesn’t want disagreement. “It depends on who wins,” retorts the dowager countess. Indeed.

This post is long enough, so I’m saving the Lady Mary vs. Lady Edith plots until a future episode. But it should be noted that the Crawley women’s clothes are simply ravishing in this episode. They are simple, flowing outfits with matching cloche hats. In fact, they reminded me of the grey outfit and hat worn by Sophie Grégoire-Trudeau on Remembrance Day.

Unlike some of the stray, myriad plots, I hope to see a lot more of those.