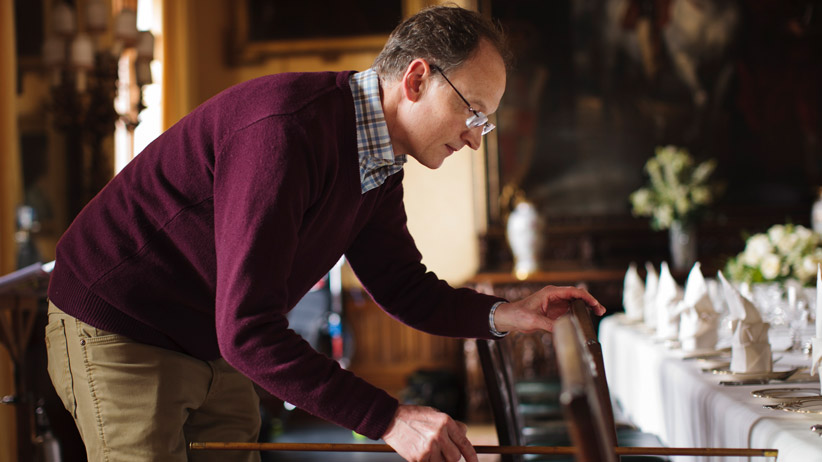 The sprawling soap opera that is Downton Abbey returns in January and, again, fans will wallow in a world long confined to history books. Beyond its dramatic storylines, what makes the British series such a delicious treat is its unwavering attention to detail. Set in the twilight of the extravagant Edwardian era, it showcases a world of starched shirts, polished shoes, gleaming silverware and extravagant menus.

It’s Alastair Bruce’s job to ensure that historical accuracy. “We call him the Oracle because the guy knows everything. He does know his onions,” says Rob James-Collier, who plays the conniving underbutler Thomas Barrow. It’s Bruce who ensures no one takes a bite until the lady of the house begins eating or checks that the hierarchy of the servants’ table mirrors that of the mahogany one upstairs.

His contributions are revealed in a documentary, The Manners of Downton Abbey, airing after the series’ Jan. 4 season premiere on PBS’s Masterpiece. Bruce—who gained his knowledge by reading “a lot of very dull books” and who was also an adviser on The King’s Speech and The Young Victoria—works closely with his longtime friend Julian Fellowes, Downton’s creator and writer, to make sure the actors know their character’s place in society, and how they would comport themselves. “Manners came into everything: how you dressed, how you ate, how you stood, how you spoke—every detail mattered. It said who you were, and where you belonged: if you were from above stairs or below,” says Bruce. While people today struggle with the seemingly arbitrary rules, it was effortless for those who lived in that era.

There is no slouching in chairs, no shoving hands into pockets, no clinking of glasses. Hugs and handshakes are firmly resisted. “We touch each other a great deal more than we [once] did,” Bruce says. “It requires a different lexicon of experience to deliver the same degree of emotion, but expressed in a non-physical way.” So when James-Collier’s character rages, he is still constrained by the etiquette of the day. “He will not get angry in way a modern person would get angry,” the actor says. “You can’t be as expressive as you’d like to be with your hands, your voice. It’s more nuanced, restrained.”

The adviser’s tasks include nagging James-Collier to lift his feet when he walks, rather than the more modern shuffle learned growing up in Manchester, since his character is a former army man. There are also no “thank yous” when staff bring the Crawley family a cup of tea, dress them or open a door. Rather the rule is one of “silent appreciation” since acknowledging service 30 times a day would be maddening, Bruce explains.

The expert also keeps close watch on the look of the show. For one scene he shows designers how to set a period dining room table so that every piece of cutlery is perfectly aligned with each plate, glass and the table’s edge. In another, he takes advantage of a break in shooting to make sure actress Laura Carmichael, who plays Lady Edith, has her evening gloves on her lap, covered by a napkin, and that when she leaves the table, she takes them with her. The lack of those gloves lands Lady Edith in the most serious of hot water—risking her reputation—when she dines alone with a beau, with bare hands. She’s “practically naked,” says Carmichael. Of course she gets pregnant. “She should have worn gloves,” the actress says, laughing.

Downton’s way of life vanished by the 1950s, when country houses were being demolished at the rate of one a week, and as families struggled under the demands of maintenance and inheritance taxes. Today, grand homes earn their own keep. When Downton Abbey isn’t being filmed at Highclere Castle, the Berkshire home of the earl of Carnarvon plays host to tens of thousands of fans, many eager to see where the Crawleys “live.”

Even after five seasons, James-Collier finds the show’s formality daunting, especially the starched shirts and collars that act as a ring of steel, forcing him to stand upright. In December, the actor was in New York, where he and friends had a snowball fight. What would Bruce have said? “I’m sure we would be doing it in too contemporary a style.”