Jaime J. Weinman on the lesser known details of the series 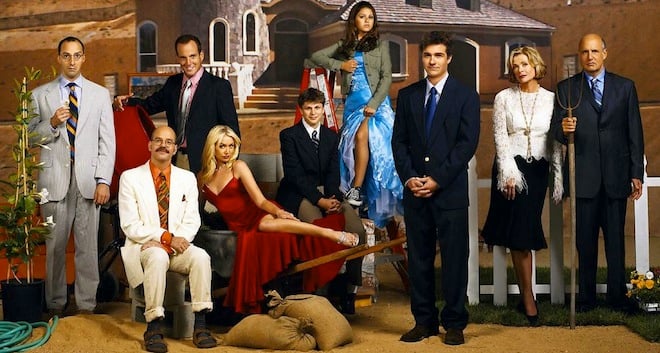 1. Arrested Development went off the air because the creator didn’t want to do it any more.

I’ve linked to this 2006 article before and will probably link to it again. Though Arrested Development was cancelled by Fox due to low ratings, its failure to continue on a cable channel was at least partly due to creator Mitch Hurwitz’s reluctance to stay on as producer of the series. 2006 isn’t that long ago, but cable was not yet as prestigious as it is now, and the collapse of the broadcast networks wasn’t considered inevitable, and I think there would have been a sense of demotion in moving from Fox to a cable network. Instead, Hurwitz formed a partnership with producers Eric and Kim Tannenbaum (Two and a Half Men) and attempted, without success, to come up with a broadcast hit. By the time that partnership ended, even a series of webisodes on Netflix seemed pretty prestigious, because the TV landscape had changed so much. But I think we’d all have been happier if the show had continued in 2006, with the entire original cast under contract. Which brings us to…

2. This is going to be a lower-budget production.

Much of the hype around the return of Arrested Development has involved, brilliantly, tiptoeing around the obvious: the show will likely not have the same production values and huge cast as it did when it was a network show. Luckily much of the show is made in the editing room, with Ron Howard’s voice-over being used to connect scenes and revise or rewrite stories. So it will be easier for Hurwitz to disguise the fact that he had to shoot the actors whenever he could get them, and that he couldn’t stage many scenes with a large number of characters at once. But the brilliant thing about the marketing of the show is that it has turned disadvantages into advantages: the idea that they had to focus episodes mostly on one character has been played up by Hurwitz as a brilliant new frontier in the new-media era of TV, rather than an epic version of those Moonlighting episodes that focused on the supporting characters who were available that week.

It wasn’t the only one. But one of the more surprising things about Arrested Development, at the time, was that almost every episode ended with a clear statement of the episode’s moral or lesson, usually accompanied by music. “There’s a hug at the end,” Hurwitz once said, explaining why his show was unfairly accused of not having heart. And he was right. The sitcoms of the ’90s were often (rebelling against the ’80s) cold and hard, with very abrupt endings where no one learns anything. Arrested Development wanted to be cold and hard, but usually stopped late in the episode to deliver a scene like this:

Michael: Why don’t you start trusting yourself, okay? Not Dad. You’re a much better man than he is.

G.O.B.: And you’re a better man than both of us. You’re the best man. You’re my best man. I mean, not if I have an actual ceremony, ’cause Dad would kill me, but… What do you say, hermano? Help me clean up this mess?

Michael: What the hell.

That is pure old-fashioned ’80s sitcom, complete with the “treacle-cutter” comedy line (“not if I have an actual ceremony”). Many of the shows that followed Arrested Development have kept that obligatory sentimental moment, which is why one of the show’s contributions, oddly enough, was to make sitcoms a little more willing to risk being “cornball.” The heartfelt scene where everyone learns something, and then forgets it next week, has come back in a big way thanks to Arrested Development.

4. Arrested Development was treated well by the Fox network.

This isn’t a very little-known fact, but it’s worth mentioning again. Fox has a reputation for making good shows and giving up on them, or used to have (lately they let shows they like, such as Fringe, run for years, so that’s changed a bit). But the network gave Arrested Development an episode after the then-mighty American Idol, and in the second season it received the best regular time slot on the network at the time, after The Simpsons. Because the show has endured, thanks to DVD and streaming, and actually grown its reputation since it was originally on, there’s a tendency to think that the network somehow handled it wrong, but it’s likely that Michael Bluth is right: “I was going to say that what has happened to us is a great injustice, that we were never really given a fair chance. But that’s not the truth. We’ve been given plenty of chances. And maybe the Bluths just aren’t worth saving. Maybe we’re not that likable.”

5. Arrested Development is one of the greatest ’00s time capsules.

The most interesting question about how the show will come back is not how it will handle the budget and cast and editing, but how it will handle the changing times. Some shows become period pieces before you realize it, and Arrested Development is very much a show of its time. This is partly because in one of the most politically timid eras in U.S. TV history–the era of post-9/11 fervour and the Dixie Chicks –it was one of the few shows that dared to get political, in an oblique way. It’s not simply the obvious similarity of the Bluths to the Bushes (and the name G.O.B. to Jeb) but the fact that it took on the Iraq war, the “Mission Accomplished” sign, and other issues of the period. It even made the military funny through one of Buster’s arcs, and irreverence toward the military is practically taboo in modern North American comedy. With the Bush era over and a new set of issues replacing the ones it dealt with (though in many cases, of course, the issues are the same), it will have to come up with a way of staying relevant to the current era. Since the story of economic problems and corporate bubbles was arguably ahead of its time, that shouldn’t be too much of a problem. But what we’re going to see is a 2013 follow-up to a show that was originally marinated completely in the weird world of 2003-5–and one of the few comedies that actually bothered to engage with that world at all.