A very Judd Apatow ending, and the search for validation will continue in Season 4 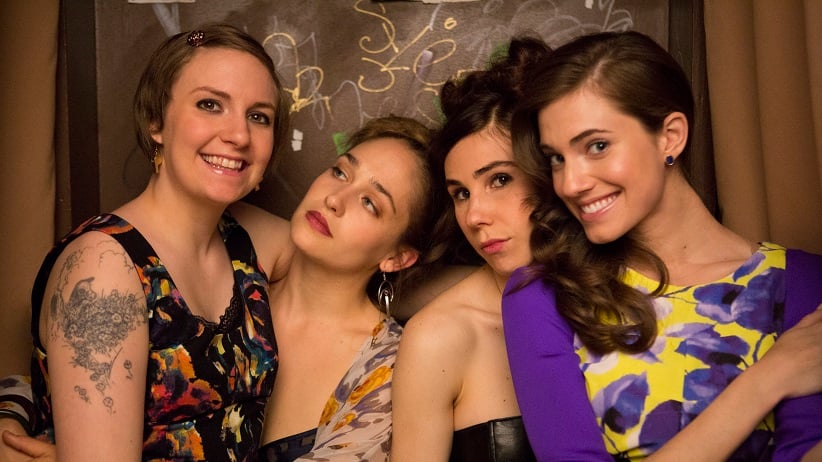 Had we known to look for it, the clues to the Season 3 Girls finale was staring at us since the first (double) episode. It came at the motel where Hannah, Adam and Shoshanna spent the night during their emergency road trip to pick up Jessa from rehab. The three shared a room, and after quickly turning out the light, Adam insisted to Hannah she have sex with him, despite the fact Shosh was a few feet away. Taking the hint, Shosh left the room for a bit, and Hannah found her later, sitting on the floor in the hall.

“Whatever I do, it’ll be better than school,” Shosh told Hannah then.

Shoshanna expected nothing more than to finish university. It doesn’t work out that way. Turns out, she’s failed glaciology (the study of glaciers) and lacks three necessary credits. Worse still, in her ensuing tantrum in her apartment, Marnie interrupts to explain she’s been sleeping with Ray. All Shosh can do is tackle Marnie on to the bed and shout “I hate you!”

She confronts Ray later at the theatre, as they’re all on hand to see Adam’s opening night. At intermission, she’s initially silent, prompting Ray to apologize for his own behaviour. But then, it comes pouring out.

But Ray rejects her. “You pushed me forward in a lot of ways,” he admits to her, “and I’m eternally grateful of that. But right now, we’re in different places and we have very, very, very different goals.”

“Please. Please,” Shosh begs. But Ray walks away, and probably rightly. Despite now admittedly being more like the people they wanted one another to be as they sat together, breaking up, in the subway at the end of the last season, there’s nowhere for them to go. Their roles would just simply now be reversed.

Meanwhile, Marnie visits Desi before the show to give him a James Taylor guitar pick. The wooing works, briefly. They make out, and Marnie’s on cloud nine for the rest of the show. But she runs into Desi’s girlfriend, Clementine, in the washroom later.

“Desi’s going to be so excited that you could be here tonight,” Marnie tells her.

“Y’know what? Can you cut the shit, please? I mean I know what you’re up to, it’s written all over you,” Clementine replies, curtly. “I mean, I don’t blame you, he’s f–king sexy, but if he hasn’t realized it yet, he’s going to soon—that you’re just a sad pathetic mess.”

Harsh thought the assessment is, when we later see Marnie spying on, and smiling about, Desi and Clementine’s argument on the sidewalk, it seems it’s an accurate one. She’s again done nothing to avoid falling for her own tragic flaw. That is, waiting for all the good things she believes she deserves to hurry up and come to her.

Somewhere across town, Jessa’s been asked to hurry along her new employers’ death. Beadie, the wheelchair-bound photographer who hired Jessa on the spot last week as the latter paid an unexpected visit to Marnie’s new gallery gig, wants to die. And she pleads with Jessa to help. Jessa’s suspicious she’s been hired simply because she has easy access to the required drugs, but Beadie tries to set her straight.

“I hired you because I thought you were the only person who would see how necessary this was. Listen to me, I’m tired,” Beadie says. “My body’s gone.”

“And i’m compassionate to that, but I just, um.” Jessa’s for once at a loss for words.

In the end, Jessa tries to help, feeding Beadie a mouthful of pills. Beadie tells her how happy she is, and advises Jessa not to take any of the pills after she’s dead. Jessa assures her she won’t. “Somehow, they don’t look nearly as fun when they’re being used to murder someone.”

It doesn’t go through, for the record. Beadie wakes up and begs Jessa to call 9-1-1.

It’s difficult to see where her character goes from here, but at least this appears to end Jessa’s tenure as a junkie.

Speaking of tenure… let’s go back to that conversation in the motel in week one. After Shoshanna tells Hannah that whatever she does with her life, it’ll be better than school, Hannah says this:

“Uh, I hate to break it to you, but school is the best gig you’ll ever have,” Hannah replied. “I mean, your job is basically just to like, be yourself. That’s why I apply to grad school every single year.”

After tearing open a letter like she lacked opposable thumbs, Hannah discovers she’s been accepted to the writer’s workshop at the University of Iowa, which Marnie quickly describes (after Hannah tells her) as “like, the best MFA program in the world.” Hannah’s parents are just as pleased when she informs them. “When opportunities like this arise, you figure it out,” her mother tells her on the phone. “You say yes, and you figure it out, that’s how this works.” But of course, things get a bit complicated.

“I’m sorry to barge in on you or whatever, I know you need your space,” Hannah tells Adam when she visits him before the play begins, “but I wanted to tell you I’m so pround of you. I’m so proud of you. You’ve taught me so much about perseverance and commitment and creativity.”

“I love you,” Adam responds.

Then Hannah tells him the news.

“I have to decide soon and I think I’m going to tell them yes, and then figure it out because that’s what people do,” Hannah tells him, quoting her mother. “We can figure it out and then we can be one of those artist couples—” (here, Adam laughs) “who are doing different things in different rooms and they call to each other and say ‘Look at what I’m doing!’ Okay?”

“You were amazing,” Hannah tells Adam after the show, as he exits backstage into the alleyway.

“No, I wasn’t,” he says. “I was f–king terrible… Why did you tell me that thing about Iowa right before I went on stage? I f–king blew it.”

Hannah assures him he did not. “Everybody was talking about how much they loved it.”

“Well, I don’t care what everyone says. I know if I’m good or not,” Adam says, reminding Hannah this was the reason why he moved to Ray’s. After a few minutes he asks Hannah if she’s leaving him.

“Leaving you? Adam, you’re the one who moved out of our apartment,” Hannah says.

“I moved a few blocks away for a few weeks,” he clarifies.

“I know that this is complicated, but I also know that we can work it out.”

“Well, I’m sick of trying to work it out,” Adam says. “Can’t one thing ever be easy with you?”

Then, they stand in silence. Hannah is the first to break it.

“Congratulations of a beautiful opening night,” she says. Then she walks away. And, as Adam attends the after-show parties he hates, Hannah goes home. When she gets there, she smiles at her acceptance letter and holds it to her chest. The credits roll.

In a way, this was a very Judd Apatow ending. The finale of Season 3 of Girls brought to mind the final episode in Apatow’s first major TV project, Freaks and Geeks. In that (unintentional) finale, Lindsay Weir, the good-girl-gone-somewhat-bad high schooler, was faced with the choice of either heading to the University of Michigan for a few weeks of an academic summit, or on a bus trip across the country to follow the Grateful Dead.

Lindsay’s situation is echoed three decades later with just about every character on Girls. They all seek self-validation, the point where they have the chance to fill that “hole in the shape of me,”  as Hannah put it, that exists in the world around them. The fact that Girls has sustained itself (or, at least, the attention of TV executives) longer than Freaks and Geeks suggests finding it is as difficult, and therefore as compelling, now as it was in 1981, even if it often feels like it should be a lot easier these days, that you can find validation somewhere in your totals of likes and re-tweets.

But how long can Girls sustain its audience? The biggest criticism of Girls has been, and remains, that these characters face no true obstacles. They have apartments. They’re fed. They have jobs. They can quit those jobs. The stakes, therefore, are all internal, existential ones. Fine, so be it. But like the characters, we are looking for some payoff, some validation of our own, that we’ve not been led down a garden path for three years. Will Season 4 bring that? Again, there’s a hint from a few episodes back, when Hannah thought she would have her e-book published for real. She was asked to describe herself during the interview with her new (potential) publisher. What’s your brand, the interviewer wondered. “…The further I live from the coast, the fatter I am,” Hannah replied. And so the search for validation—the Girls’ and ours—goes on.