'Grantchester' scores with a hunky vicar who solves crimes

It's set in a lovely village, but this PBS Masterpiece series is not the typical "cozy" mystery 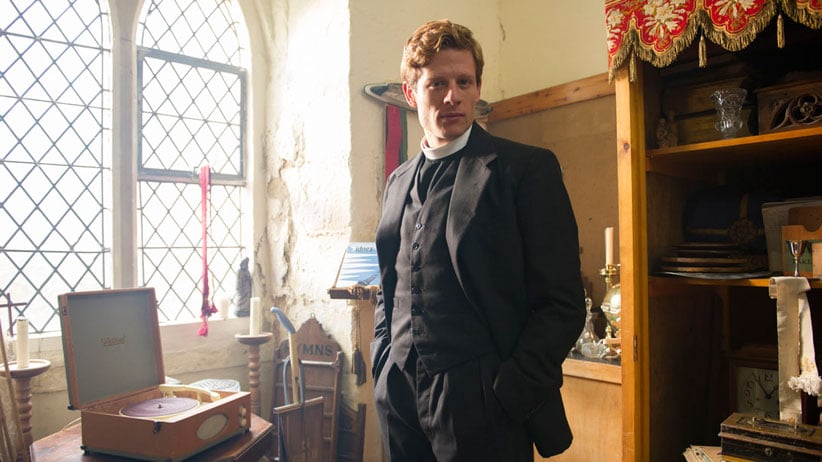 In the latest British mystery series to air on PBS’s Masterpiece, Canon Sidney Chambers lives in 1950s Grantchester, a sleepy village just outside the university town of Cambridge, England. Yet he’s not a typical vicar, nor is the area truly peaceful, bucolic English countryside. Rather, there is a shocking number of unexplained deaths, even murders.

Although the six-part series (Grantchester premieres on Sunday, Jan. 18, at 10 p.m. ET, immediately after Downton Abbey) starts off looking like a classic British cozy mystery—an amateur sleuth solving crimes in which violence, sex and controversy is sternly downplayed—it soon becomes apparent that this is anything but the typical cozy.

Actor James Norton, who plays Sidney Chambers, calls the series a ” ‘why done it’ rather than a whodunit. A lot of time is spent exploring wonderfully rich and layered people.” Set in 1950s Britain, the privations of wartime are finally giving way to the excitement of a new reign (Queen Elizabeth II has been on the throne just two years), new industries and new thinking. While it’s at times a nostalgic and warm snapshot of the era, “It doesn’t pull punches about what the 1950s were—the problems and the prejudices that were rife in those days,” Norton explains.

“When people hear it’s about a vicar who’s a detective, they immediately think of a bumbling, nice, inoffensive person,” the actor says. “Sidney is so layered, there’s so much going on. I saw so much of myself in him: a young guy, muddling through, trying to stay on the right path, always getting temped off.” The vicar has an irascible housekeeper, drinks too much, has problems with women, issues with his parishioners, even concerns about his adorable puppy, Dickens. Sidney Chambers isn’t an all-knowing, all-seeing amateur à la Hercule Poirot or Jane Marple, but a hunky bachelor who likes the bottle, prefers jazz to classical music and has a love life that grows increasingly complicated as the series continues.

The six episodes are loosely based on stories from James Runcie’s book, Sidney Chambers and the Shadow of Death. But there are stark differences. Runcie’s character is based on his father, Robert Runcie, who had a “good war,” as the British say. Known then as “Killer” Runcie, he was awarded the Military Cross for his bravery and was one of the first into the Bergen-Belsen concentration camp in 1945. An Anglican priest after the war, Robert Runcie rose to be archbishop of Canterbury, famously marrying Prince Charles and Lady Diana Spencer in 1981. While the books mention the war in passing, in the television series, James Norton’s character is haunted by his experience as a tank officer with the Scots Guards. One episode focuses on the psychological damages inflicted on those who served, including Sidney Chambers.

Soon, Norton will be playing Sidney Chambers again. A second six-part series is in the works. “Going into the light of Sidney’s headspace,” is an enjoyable change of pace for the actor. Just prior to shooting the first Grantchester series, Norton spent five months playing a villain in the drama Happy Valley (currently on Netflix Canada), while researching the role of the sleuthing priest. It was a tough combo, he says, “psychopath by day and vicar by night.”