He said, she said: America loves a comeback 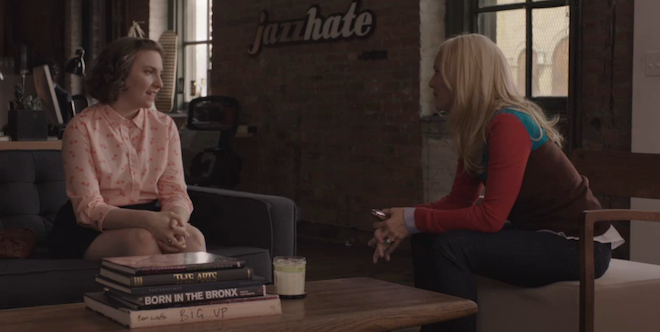 He said, she said is a discourse on the second season of Girls from two points of view. (Find previous conversations here.)

Hannah has a meeting with an editor who says she’ll pay her $200 to write about her first-time cocaine experience. She then procures the drug from her downstairs neighbour, Laird, who is a recovering addict. Marnie has a run-in with the obnoxious artist, Booth, who kissed her last season. Elijah accompanies Hannah during a night of cocaine and dancing, and accidentally confesses that he and Marnie had sex. Hannah, high and livid, drags Elijah, along with Laird, to Booth’s place in order to confront Marnie about being a bad friend. 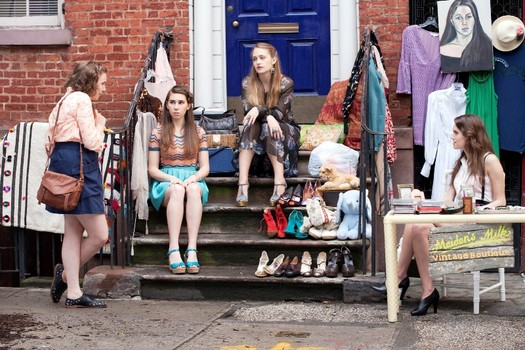 He said, she said:

He said: This episode seemed a little ham-fisted; the utter contempt for modern art and modern writing and modern thought seemed really obvious.

She said: I totally agree. I found Hannah to be almost too condescending, like when she’s meeting with that editor about possible freelance work. You get the sense she feels there’s no one who she can learn from. It’s a level of confidence, maybe, that you just have in your twenties and never get back.

He said: At “jazzhate.” That’s a very funny name.

She said: That was the name of the publication? I missed that. Are you kidding me!? That’s amazing! What also bothered me was the way she was demonizing Marnie at the end: “You’re the bad friend and I’m the good friend. Now you say it out loud so that it will be true.”

He said: It was Stalinistic. A forced confession, and really sick.

She said: But nobody ever said we’re supposed to love Hannah. She’s clearly flawed and selfish and her personality can be quite ugly at times.

He said: Exactly. But again, she’s doing it all while being very, very funny. One thing I think worth mentioning is that with all the hype that the show–and Lena Dunham–is enjoying culturally speaking, nobody is really commenting on how insanely funny the show can be. And this episode, although not as enjoyable as the second, is certainly reaching heights of comedy that are over the top, pretty out there and pretty wonderful. Like Laird the drug addict, for example. That’s a serious thing. He’s in recovery. And yet they drag him into this drug odyssey for their own experience, for this stupid little article Hannah’s writing. There’s that incredible scene where he’s talking about how he’s violated his own life by buying them drugs from them, which I imagine is the worst thing an addict could do, and the only thing they keep saying is “Yeah, we said thanks.” As in, like, get over it already.

She said: I was very happy that Booth came back this season. Do you know where we know him from? I remembered after watching Saturday Night Live last night: He’s in many of Andy Sandberg’s Digital Shorts. Remember the “Jiz in Your Pants” video?

She said: Anyway, again, he’s this archetypal character–the New York intellectually shallow, bravado artist, who makes a ton of money selling average art and sleeps with whomever he wants. Now, with the portrayal of the archetypal editor–that sort of rubbed me the wrong way. But this one? This one Dunham nailed because he’s not sketched out lazily. I mean, this is a guy who is thinking of calling his next show “Children’s death games” and when he shows off that second-rate dollhouse to Marnie–

He said:  Did you notice that he says he decorated some of the rooms from dreams and some of them from newspaper articles he read but all we see is the room he decorated from The Shining with Redrum written on the walls.

She said: That’s what I was going to say! And his installation with the tower of televisions that Marnie has to crawl into? It’s so terrible! And, for me at least, it’s representative of everything that makes me sad about plenty of contemporary conceptual art. It’s like Booth took all the worst U2 videos in existence to put on those screens: A crying baby, animals in raw nature, eating each other. You don’t need to see the artist statement, but you have a pretty good idea of what it might say, or what it wouldn’t say, maybe. I mean, even the way he makes love to a woman is designed to the T.

He said: It was very, very funny, much like the archetype of the editor at the beginning with the shitty message written on the office wall: “Where the magic happens,” outside of your comfort zone. But it’s a little different because it’s not incisive or insightful, which is what I meant when I said this episode seems a lot more ham-fisted than others. But now I’m thinking back to the episode last season where her boss sexually harrasses her at the office and that was pretty ham-fisted too. Comedy can be as broad as it can be subtle and they can both be enjoyable: it doesn’t always have to carry a secondary level of cultural critique of a higher order. But I think the show is generating the kind of buzz that it’s expected, even though it’s never been promised to you.

She said: This is going to come out all wrong and maybe I shouldn’t even say this, but when it comes down to the way they portrayed doing cocaine. I don’t know. It was just so funny. When you think of comedic moments involving drugs in movies, it’s always marijuana, like Pineapple Express, or Ted. It’s usually guys sitting around eating junk food and laughing and watching junk TV in their underwear. But if cocaine enters into a movie, it’s usually a pretty shitty scene. I’m talking about Scarface or Good Fellas. It’s generally used to illustrate just how far a character has morally descended. But this portrayal of doing cocaine is showing, I think, just how domesticated cocaine use is, in certain circles. Cocaine is like smoking pot.

He said: You’re right! And I think cocaine isn’t as tired a cultural reference as marijuana is, or a person who smokes marijuana is. It’s still shocking to see it. And it’s pretty ripe for humour. It’s also sort of the idea of America loving a comeback–look at Lance Armstrong–and cocaine is sort of a comeback drug. It was the drug of the ’70s and the ’80s and I think in the ’90s it waned. The first movie I remember where you saw casual cocaine use being humourous was in Superbad, coincidentally a Judd Apatow production. The older kids are all doing cocaine and getting crazy. It was being used in popular culture in a really natural way.

She Said: Marijuana isn’t really of this moment. It makes you want to reach out and hug your fellow man.

She said: Did you make anything of that scene where Hannah and Elijah are high on cocaine and still in their apartment and she guiltily confesses that she wants to get married with a big wedding one day?

He said: I thought that scene was especially funny because it came after Elijah’s confession that he wants to raise show dogs. They’re both confessing against type, towards type. Raising show dogs might seem like the ultimate gay stereotype but he’s going to do it anyway because he doens’t care. And same goes for Hannah, who we expect wouldn’t want a big fancy wedding but she confesses she wants is to wear a veil and try 15 cakes. It’s a very funny scene. I also just want to point out how funny the idea of a gay couple, who dress the same, who have the same name, who are  brand ambassadors and who are iPad DJs. I mean, I think this is the funniest episode out of the three so far, in terms of big laughs.

She said: Yeah, okay. But I feel like some of the humour was less refined, more raw. It just delivered those big laughs straight up, without nuance. Well, except for Booth as an artist. But Hannah being high on the dance floor and taking her top off and exchanging it with a stranger and then wearing this mesh tank top for the rest of the episode with her nipples protruding? That was, I don’t know, it was like college humour, I guess. I laughed like I do when I watch a Will Ferrell movie, or East Bound and Down.

He said: And it’s why we’re talking about it ultimately. If she wasn’t making people laugh, we wouldn’t be having this conversation. There wouldn’t be editorials written about whether the show was inclusive or exclusive, or whether or not it represents a racial demographic.

She said: Are you talking about that Atlantic piece [I’m a White Girl: Why ‘Girls’ Won’t Ever Overcome Its Racial Problems]? That one just left me scratching my head. We’re going to have talk about it next time because I don’t think we should get into it now.

He said: We’re two white people sitting around talking about a show about white people, I don’t know if we should ever get into it.