He said, she said: Is it OK to talk about Lena Dunham's body? 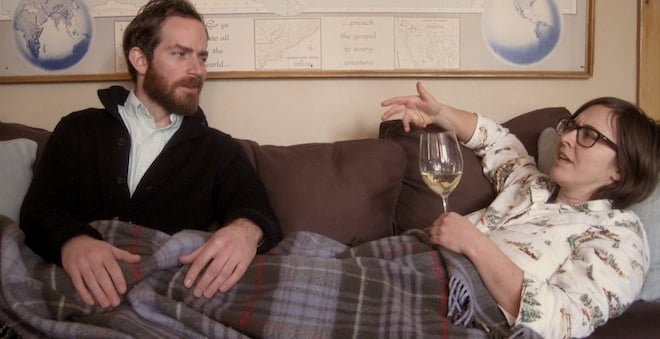 He said, she said is a discourse on the second season of Girls from two points of view. (Find the conversation on episode 1 here.)

Marnie continues to struggle on the job front. Elijah and Marnie decide not to tell Hannah about their brief–only two or three “pumps”–sexual encounter. Shoshanah and Ray are in love. And so too are Jessa and Thomas John, post-honeymoon. Hannah calls 911 on Adam and breaks it off with her Republican lover.

He said, she said, after the episode:

She said: I liked this episode more than last week’s. Did you read that article last weekend in the New York Times profiling the three boys in Girls–Adam, Ray and the good-looking guy who we don’t see at all in this episode? The article mentioned that the three actors had been non-stop referencing John Cassavetes. It just reminded me of one of the reasons I think I’m drawn to the show because in your twenties you’re not self-conscious about talking about John Cassavetes as an influence. And there’s a certain innocence that’s really easy to mock, I guess. They’re not ashamed, and maybe they’re making fun of it themselves.

She said: I don’t think they sounded like jerks in the end, although maybe subconsciously I didn’t want them to sound like jerks.

He said: I think that article was written by a woman and in her preamble she said explicitly that the show is for women. I have a huge beef with that. And I can’t remember if I’ve come across it in other places–maybe when I Googled “Lena Dunham’s body” I might have read on a couple of blogs…

He said: Yeah. I wanted to see if other people had talked about it as this sort of insane prop that she uses for comedy, for viscera, for truth, and to see what other people thought about it. Because I have such a visceral reaction to it. It seems like the type of thing even on a show like this, which is one of the things that is so fearless about it, and about her, that even to talk about her body in pop culture writing is still a dicey thing to comment on.

She said: But she’s got to be aware of that! In the scene in this episode where Hannah’s combative with Marnie about Marnie doubting that Hannah could get a pretty person job–as she’s eating a tub of Cool Whip, standing up in front of the fridge.

He said: Oh, for sure. I think that there’s something bold about using her body not just as a way to mine feminine insecurity but also, basically, as a punchline. Because it is a very funny thing and a hysterical part of the show.

She said: It’s physical comedy at its best. Other comedians do it.

He said: Fatty Arbuckle, and Buster Keaton’s body and his face were totally part of what made him funny. I mean, why not? A lot of comedy is just upsetting expectations so immediately she’s got–

She said: She’s got one up on, say, Jennifer Aniston. I do not find her funny.

He said: Or Sandra Bullock.

She said: I don’t find either of them funny.

She said: OK, maybe. But not Jennifer Aniston.

He said: She’s a good foil.

She said: She’s a good foil, but in Wanderlust, she isn’t funny once. She’s only allowing other people to be funny. Like you say, as a foil. But she is not funny. We’re getting off track. I wanted to talk about when Jessa insists that Hannah just needs to read a newspaper to understand her reference to the collapsed economy and then in the same breath she asks what her Republican boyfriend’s rising sign is. I can only hope–and I always find myself wanting to have faith in Dunham in these moments–but I hope that that dichotomy was intentional.

He said: You are obsessed with that–with horoscopes being published in newspapers.

He said: It’s an insanely funny moment on the show. It’s also funny, I think–because I personally know five or six people who really, without selling them short, have no real idea what the Glass-Steagall act is, but they reference it in conversation, probably because it was referenced on The Daily Show. That scene is a very nuanced bit of cultural critique.

She said: I don’t know what the Glass-Steagall thing is.

He said: Are you joking?

She said: I don’t watch The Daily Show.

He said: It was a piece of legislation that went through in the 1930s that basically was the banking regulation law–and check this please–but slowly and slowly through the 1950s it had been chipped away at by the financial lobby until finally, Bill Clinton made some sort of announcement that it was null and void. It was definitely finished with legislation/deregulation under Bush and it is the deregulation that lead to the financial crisis. I think part of what makes Jessa so intriguing is that it’s this character type that you know from your own life, a sort of archetype who has wisdom, without knowledge. And her husband, Thomas John–

She said: Absolutely! And you wonder what the appeal is of those people, until a certain point when you realize that the appeal is material. He/she will pick up a bar tab, he/she has a nice condo where you can go and hang out with a great sound system and it’s this weird thing because you think How can a person be so boring? And yet that person also has an impulse to move toward interesting people. Almost like the gallery curator who denies Marnie the job in this episode. That’s Laurie Simmons you know; Dunham’s mom.

She said: Her being on a juice cleanse? And her assistant not preparing her tea properly? You know that these things have got to be true stories plucked from her mom’s experiences; she used to hang tight with the likes of Cindy Sherman. It’s just got to be true.

He said: It’s also funny and sad that that’s what Marnie is aspiring towards: that the most she can hope for with her Bachelors degree in the arts is to get tea for someone like that woman, for minimum wage. That job, while having social gravitas, is actually less rewarding and more demeaning than being a hostess at a club, which is “exploitive,” as Hannah says.

She said: Wait a second: I thought Hannah’s parents cut her off financially in season 1. How can she be surviving on 40 bucks a day working in a coffee shop in New York?

She said: They need to explain that.

He said: But back to the adult characters. Something else that came back in this episode and was framed nicely was the opening where the older gay guy has the argument with Elijah, where there’s this sort of generational rift.

She said: And the show, I’m beginning to think, is more about generational rifts this season.

He said: Absolutely. One of the things I thought was so funny at the end–it’s almost like a spoof of when you see domestic violence on TV with the 911 phone call–is the level at which the younger generation does not take anything seriously. I feel that a sensible person would know if you call 911 and hang up, something is going to happen. There are consequences for that. And likewise, if you’re in a relationship with somebody and even if you only put your penis into someone else for three pumps, something is going to happen. And there are these weird equivalences that go on in the mind of these kids. Elijah says that he’s even with his boyfriend because his boyfriend got drunk and was embarrassing at a party. He equates that embarrassment with cheating. As if that’s an equal transgression to having sex, in his mind. And Hannah, in her mind, she’s called 911 because she wants Adam to stop texting her. And the police will just wrap it up. It’s like watching kids move in an adult world of semi-consequences, who are sort of puzzled when those semi-consequences pan out to be real.

She said: You never finished explaining why it bothers you that the writer of the New York Times article inferred that the show was for Girls.

He said: Doesn’t it bother you that somebody would assume the show is for women?

She said: Well, the show is called Girls.

He said: Here’s the thing: I don’t bristle if somebody was to say that Sex and the City, for example, was a show about women, for women. Girls is constantly being misrepresented as being the SATC for millennials, which is not true.

She said: Why do you think this?

She said: But you liked it in the beginning!

He said: Yes, I did and I will gladly go on record as saying I watched every single episode of that show about three times a piece and that genuinely it was an intelligent show for the first season and then it just swerved into total vapid f–k brain territory. But you get worn down by exposure. Even if you think that the world would be a better place if Carrie, Samantha, Miranda and Charlotte were put into a rocket and blasted from the surface of this earth, you still can’t deny you’re interested and invested in those characters. And in a certain way, as a man watching that show, the male characters were the most interesting part of that show.

She said: Big, Aiden, Harry, Burger, Kyle MacLachlan’s character. … Sure. I can agree with that. Except for that hotel magnate: he was just a shitty character.

He said: Richard. We’re totally digressing. What I’m trying to say is that it doesn’t bother me that SATC is for women because I fundamentally believe that to be true. But I don’t believe that Judd Apatow went to Lena Dunham and said, “Look kid, you’ve got something. Let’s do Sex and the City, but for millennials. We’ll make a ton of money.”

She said: I wonder if Sarah Jessica Parker has ever watched Girls.

He said: I’d love to see her as a guest star. I mean, I love SATC. I’ve probably spent more hours with it than any other show.

She said: No! What about The Sopranos?

He said: I’m sure I’ve watched that f–king episode of SATC where Carrie and the Russian are drinking Russian tea about six times.

She said: I feel like that’s partly my fault. I’m really sorry.