How Game of Thrones made nerds of us all

After four seasons of political intrigue and poisoned bloodlines, Game of Thrones heads off in a different direction 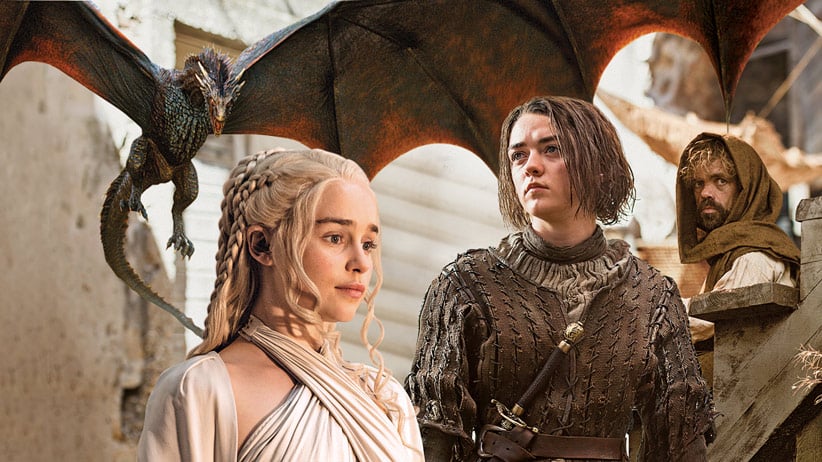 Late last month at Toronto’s TIFF Bell Lightbox, the fortunate few (hundred) assembled. “No spoilers!” someone yelled from outside the cinema, his plea barely audible over the din of construction jackhammers pounding through King Street. It was the Canadian premiere of the fifth season of Game of Thrones—HBO’s immensely popular high-fantasy series adapted from George R.R. Martin’s Song of Fire and Ice novels. Inside the theatre, fans and industry types basked in the pre-release buzz: catching each other up on some of the series innumerable plot points and characters, making predictions for the new season, howling and applauding for the HBO logo like sports fans drunk at a home opener.

There wasn’t a costumed fanboy in the house. These people looked normal—an indication of how immensely popular the show has become. It’s a series that has accomplished the unlikely coup of making high fantasy palatable to the masses. “Last season, Game of Thrones was the most-watched season of a series in Canadian pay-TV history,” says Tracey Pearce, a senior-vice president overseeing the network. In Canada alone, viewership has grown by something like 234 per cent, with the fourth season drawing more than 1.2 million viewers every week. And, for the past three seasons, Game of Thrones had the distinction of being the most illegally downloaded show, something HBO programming president Michael Lombardo called “a compliment of sorts.”

Once in a generation, a genre offering successfully makes the transition into full-blown pop-culture phenomenon. Gen X had the space opera of Star Wars. Gen Y had the Scream movies, those post-post-modern riffs on the stalk ’n’ chop slasher movies that played to the media literacy, cynicism and acute self-awareness of its teen demographic. Now, we have Game of Thrones: a show that moved the dozen-sided dice, orc-slaying and other Dungeons & Dragons dorkery well into the mainstream.

It’s no small feat. Fantasy is perhaps the most ghettoized of genres. Sci-fi has all the socio-political allegories. Horror has the thrill of cheap violence and superfluous nudity. But high fantasy? Dragons and elves and barbarian hordes and halflings and warring families spilling blood for the chance to sit on a throne made of swords? That’s nerd stuff, man. “Even though it’s set in a fantasy world with dragons and magic,” Pearce explains, “Game of Thrones touches on themes of treachery, family, honour, ambition, love and death, in a way that feels very real. Of course, the series’ unprecedented production value is another key element; it’s unlike anything else out there.”

Explaining the show’s popularity has become an integral part of Game of Thrones’s broader reception. At times, it seems to be pulling double duty as a think-piece generator. But whether the show is tapping into our climate of cultural apocalypticism (says io9), appealing to a desire for an almost violent moral clarity (according to BBC), or reinforcing our nastier tendencies toward misogyny (see: The New Republic, and elsewhere) and whitewashed racism (qua Salon) it feels, ultimately, a little academic.

Game of Thrones is good because it’s carefully crafted, immaculately well-designed, peopled with fully realized characters in a genre known for trading in stock character cut-outs, densely plotted, and packed with cliffhangers, twists and triple-crosses that seem perfectly suited to the commercial-free, serialized TV format. “The story is much bigger than any of the characters,” says 30-year-old Toronto superfan Jessica Rose Powell. “There is no real main character in the show, or in the books. It’s one of those stories that’s about more than one person, or one family.”

It’s true. After all, this is a show that unceremoniously beheaded its main character (Sean Bean’s Ned Stark) in its first season. It sounds like a cruel spectacle, and maybe it is. It’s not unlike one of HBO’s earlier successes in the hour-long-drama category, the prison show Oz, where a new character was just as likely to make it through to the end of a season as he was to be shivved or beaten to death by the end of the episode. In Game of Thrones, as in Oz, even the most beloved characters can seem like corpses-in-waiting.

And yet, somehow, Game of Thrones has earned the goodwill of fans, even while regularly dispatching major characters in violent wedding ceremonies or late-night trips to the lavatory gone gory. As Pearce notes, “finding out who’s going to die next has become one of the reasons to watch the show.” It’s at once cruel and compulsively addictive, while simultaneously seeming highbrow enough to justify marathon binge-watches—like a full-bodied Bordeaux laced with amphetamines.

Now, the game has changed. In its fifth season, Thrones heads in entirely new directions, exploring different settings and forging new alliances between what few of the original characters remain. The program’s fictional kingdom of Westeros was thrown into disarray in the Season 4 finale, following the murder of the realm’s chief power broker, Tywin Lannister (Charles Dance) at the hands of his avenging son, Tyrion (Peter Dinklage). Viewer expectations were similarly upturned. Fans who had gotten cozy with the paranoid political manoeuvring unfolding in the capital city of King’s Landing are in for a substantial shift, as the ranks of the Lannister clan thin, and fan favourite characters like Tyrion and the adolescent swashbuckler Arya Stark (Maisie Williams) are last seen sailing across the sea, their futures unwritten. 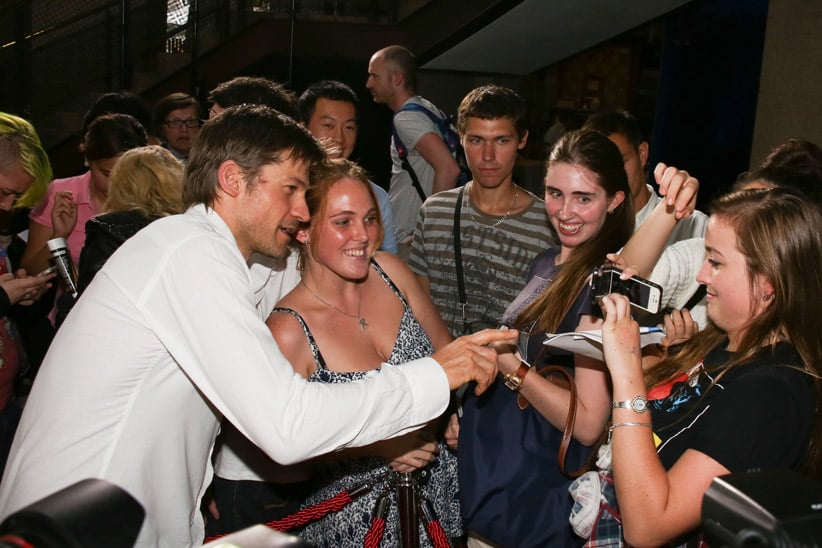 Our first encounters with this new, expanded world of Westeros is seen through a pinhole. From the point of view of Tyrion Lannister—drunk, dishevelled, packed into a shipping crate—the southern kingdom of Dorne slowly comes into view. It’s a location that has only been hinted at in previous seasons, depicted as a laid-back bacchanal renowned for its more relaxed attitudes towards sexuality and polyamory—and home of Prince Oberyn, whose death near the end of the show’s last season set a new standard for Thrones’s capacity for gory, fan-punishing cruelty. Now, the balmy southern kingdom of Dorne (“as far south as south goes,” as smirking anti-hero Jaime Lannister puts it) will become a major setting; the base of operations as Tyrion’s travelling companion, the ever-scheming eunuch Varys (Conleth Hill), plans to reshape the balance of power.

Until now, much of the action on Game of Thrones had been relegated to more northerly parts of Westeros, from the looming castles of King’s Landing to the ruins of Winterfell and the frostbitten wastes beyond the Wall (an ancient fortification built to separate the ostensibly more civilized quarters of Westeros from the “wildlings”—and worse—dwelling in its frozen north). There was a certain severity to these surroundings that reflected Game of Thrones’s arch seriousness.

The sunnier, sillier chapters of the show’s epic drama unfolded elsewhere, across the Narrow Sea, and belonged primarily to its de facto heroine, Daenerys Targaryen (Emilia Clarke): a young royal turned warrior princess amassing an army of dragons and castrated soldiers with the long game of storming King’s Landing and claiming the Iron Throne for herself. In these segments, set against desert wastes and subtropical slave kingdoms, Game of Thrones’s genre fiction roots seemed more obvious. Dragons, barbarian horsemen, wizards, warlocks and people draped in lavish chain mail and gems—it was like an episode of the old Hercules show with Kevin Sorbo.

The fifth season’s shift to the humid, well-upholstered, Moorish-inspired kingdom of Dorne, combined with Daenerys’s struggle to consolidate her power in the conquered slave city of Meereen (including a new plotline that has fighting pits reopened to appease the public’s thirst for blood), sees Game of Thrones moving deeper into this more fanciful, Saturday-afternoon-serial mould. (Though, granted, it’s an R-rated Saturday afternoon that sees patricidal princes puking up goblets of wine and gelded warriors getting their throats slit inside brothels.)

“The first book in the series was called Game of Thrones, and focuses on the seven kingdoms and the conflict with the king,” says Thrones devotee Powell, who started reading Martin’s books in order to prevent anyone else from spoiling the TV show for her. “But it really progresses. From there, it becomes more and more about fantasy.”

Season 5 reveals Game of Thrones for what it always was, and what HBO may have tried to fudge to lure in viewers skeptical of the genre’s excesses. It has morphed, almost imperceptibly, from a grave, European medievalist-inspired political intrigue about glowering kings and poisoned bloodlines, to a full-blown high-fantasy epic, with the dragons, ice zombies and giants to prove it.

As it heads into another season of intrigue, magic and wanton assassination, Game of Thrones confronts its audience with a harsher truth. It’s not so much that the series has made fantasy fiction palatable, or even “cool.” It’s that Game of Thrones has made nerds of us all.