How much longer can The Bachelorette last? 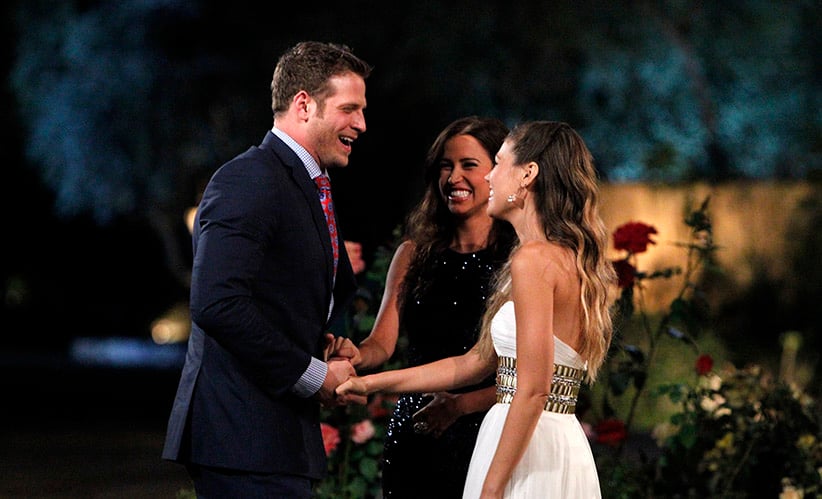 Sonya Bell joins the Thrill, Maclean’s pop-culture podcast, to discuss the legacy of the cancelled shows American Idol and CSI. Subscribe for free now on iTunes! Subscribe on Stitcher! Android users can find us on Beyondpod!

Will it ever end? This is the primary question that comes to mind during the first episode of The Bachelorette (and The Bachelor, for that matter). It’s a question worth asking of the cavalcade of men deposited by limousines at the mansion and, more broadly, of the show itself. But let’s address the women first.

If the producers of The Bachelor and Bachelorette have learned anything, it’s that doubling things usually means higher ratings. It’s why the most common phrase on the show, apart from “here for the right reasons,” is “to be continued.” What’s surprising is that it took them this long to figure out they can double other things, too—like bachelorettes.

On this last point, everyone was quite clear. In fact, this fact was practically the only thing anyone discussed for the first two hours of the three-hour, two-night premiere.

Host Chris Harrison reminded us right away of the double-bachelorette twist, adding: “Will this be awkward and probably a bit painful? Sure.” (As if anyone were watching for anything else.) Bachelorette Kaitlyn Bristowe (“so nervous”) and bachelorette Britt Nilsson (“so excited”) were very adamant in repeated cutaways that they were very different women. And when they stepped out of their respective limos, the men greeted the women separately, resulting in thrown shade and further cutaways of Kaitlyn and Britt as different people, discussing their differences to camera. Once they were inside, it was all the men could talk about, too, and they quickly concluded that the split between the men who preferred one woman to the other (because of their differences) was very narrow—probably why they had two bachelorettes, they concluded.

And on it went, nearly uninterrupted.

Then some fool named Ryan M—and not a stranger to the Bachelor world, as it turns out—very drunkenly interrupted.

Ryan M.’s crimes were (in no particular order): asking aloud, “Is this the gay Bachelor?”; telling Canadian sex coach Shawn E., who arrived in a car filled with water (a “car pool”) that the car “sucks”; informing Shawn E. that he, like his car, also sucked; drinking Fireball on the rocks; declaring he was “all horned up right now”; taking his pants off and getting in the pool; telling Shawn E. that he sucked, again; drunkenly trashing the voting room; grabbing Britt’s face for a kiss; telling Kaitlyn she was “Ryan approved”; slapping Kaitlyn’s rear end; referring to the women as “a couple of hoes”; and responding to the (reasonable) question, “Why are you taking your shirt off right now?” with: “The question is: Why am I not raping you right now?”

Chris Harrison eventually sent him home—but not, it should be noted, because he had done all the things listed above. Rather, Harrison sent Ryan M. packing because he was “clearly not here for either of these girls or for sincere reasons.” Which, while probably true, seems like a pathetic reality-TV non-reason and, more egregiously, not any of the other reasons for which he really deserved to be sent home. It might have been nice, given the circumstances, if Britt or Kaityn dismissed Ryan, rather than it being left to the man in charge, but, of course, the traditional power dynamic is never truly upended on this show, no matter what anyone says about handing the control to the women. Let’s not fool ourselves.

As it turned out, Ryan M. was not the only potential bachelor to go home. With the votes cast, and 24 hours of programming passed, it emerged that Kaitlyn won out—but by a slim majority. “I don’t know if that makes it better or worse,” Britt said on hearing how close she’d come. The answer is: worse. “I didn’t see that coming at all,” Britt confessed later to the uncaring glass eye of the camera. She was grateful, she said, to have met the men, but she now almost wished she hadn’t. “I’m so confused,” she cried, perhaps realizing there was no other woman immediately close by against whom she could directly contrast herself.

But it might not be all over for Britt, for, as we learned by the end of the night, she may have a suitor after all. On hearing that Kaitlyn had been chosen, singer-songwriter Brady was cast into inner turmoil and, at the rose ceremony, finally removed himself from the running in favour of asking Chris Harrison to put him in touch with Britt. “My heart is with the woman who left a couple of hours ago,” Brady told Kaitlyn. “Life’s too short,” he decided.

Which brings us back to our first question: Just how long a life can The Bachelor/Bachelorette experience have? In the wake of American Idol’s (pending) demise, the question seems relevant. The Bachelor is a few months older than American Idol, and there had only been two Idols crowned by the time The Bachelorette went to air. And yet, while Idol eventually suffered from exhaustion, there seems to be an entirely inexhaustible pool of folks willing to sign up to try their hand at love on The Bachelor and Bachelorette and, possibly, an even bigger lot who will watch them (mostly) fail.

The thing reality TV has always been able to achieve is some semblance of interactivity, either almost literally (casting votes, as in American Idol), or through the documentary-style cutaway interviews that mimic a one-on-one interview in which the viewer is asking the questions. But since we’re talking about differences, there is one thing that sets shows like The Bachelor and Bachelorette apart from American Idol and its ilk. The Bachelor and Bachelorette convince us that what we’re seeing can be applied to our own lives. We may or may not want to learn to be a better singer, but chances are, we do want to learn to be better at human relationships—either observing them or taking part in them. And watching those who are colossally terrible at them is integral to the experience (not to mention the fun).

In that way, The Bachelor and Bachelorette are more like The Price is Right. They make us feel like experts, and not just at the beginning, as American Idol did when it allowed us to backseat-judge the auditions, but all the way through. Not so deep down, we know the truth is that The Bachelor and Bachelorette don’t make us experts in relationships or love, any more than The Price is Right makes us thrifty shoppers. But, barring a major disruption that might convince us to accept that truth, the ruse is sustainable. So, here’s to another season—and another and another and another, probably.