Jon Stewart is back, now at HBO. Could he change the VR game? 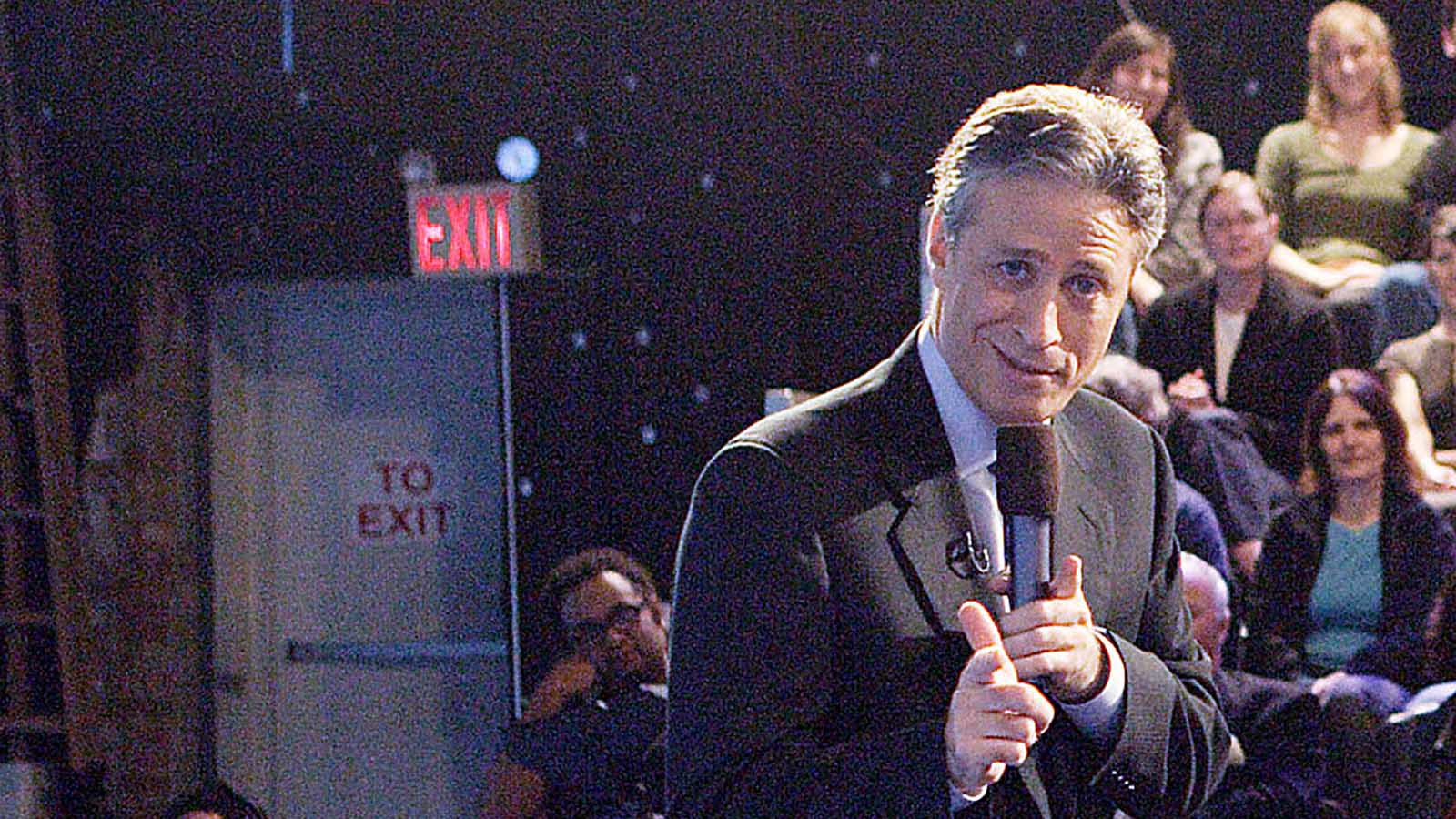 Comedian Jon Stewart talks to the audience during warm-up for a taping of The Daily Show With Jon Stewart at the Daily Show studios April 6, 2005 in New York City. (Photo by Scott Gries/Getty Images)

When Jon Stewart left The Daily Show after 16 years at the helm, he said he was tired and needed a break, and he said it rather convincingly. But few believed he was retired for good; many thought he would find a new project quickly that would excite him again. “It’s not like I thought [The Daily Show] wasn’t working anymore, or that I didn’t know how to do it,” he told The Guardian. “It was more, ‘Yup, it’s working. But I’m not getting the same satisfaction.’ ”

It seems he’s found something to his satisfaction.

Surprising few, Jon Stewart is returning to the airwaves with HBO, the cable network that recently acquired the big-name services of ESPN exile Bill Simmons, signing a four-year deal to make “timely short-form digital content” based on current affairs.

The fact that HBO seems to imply that he’ll release short takes on the news is unsurprising. What’s most interesting is how he’ll be collaborating with OTOY Inc., a company that is making its name in the realm of virtual-reality technology. VR seems distant—the much-buzzed Oculus Rift system is hardly something that can live in everybody’s home, at least right now—but many in the digital-media format are calling this year a “critical” one in its development, and it has the potential to entirely disrupt the marketplace as soon as it becomes reasonably priced and widely accessible. That future is definitely coming, and HBO—long courted by companies to get on board because of its vast content vaults, as companies like Vrse angle to dig into their marketplace as digital-content creator of the VR future—might be looking to make a high-profile splash.

HBO has already used virtual-reality as a marketing tool. Could Jon Stewart soon be delivering witty takes, right in your living room? Certainly not in the short-term. But it’s an interesting move by HBO, all the same.

LOS ANGELES, Nov. 3, 2015 — Jon Stewart and HBO have concluded an exclusive four-year production pact, it was announced today by Michael Lombardo, president, HBO Programming. The partnership marks the next phase of Stewart’s groundbreaking career, beginning with short-form digital content, which will be showcased on HBO NOW, HBO GO and other platforms, and includes a first-look option for other film and TV ventures.

In his first project for HBO under the new deal, Stewart will view current events through his unique prism. Working with the pioneering cloud graphics company OTOY Inc., he is developing new technology that will allow him to produce timely short-form digital content, which will be refreshed on HBO NOW multiple times throughout the day. Additional projects will be announced as they are confirmed.

“Jon Stewart led a revolution that changed the face of TV comedy on the ‘Daily Show,’” said Lombardo. “He graced our network nearly 20 years ago, so we’re thrilled to welcome back his immense talents in this next chapter of his career.”

“I’m so excited to be working with Richard [Plepler], Michael and the entire HBO family,” says Stewart. “Appearing on television 22 minutes a night clearly broke me. I’m pretty sure I can produce a few minutes of content every now and again.”

Jon Stewart became the host of “The Daily Show with Jon Stewart” in 1999, stepping down from the show earlier this year. The series recently won three Primetime Emmys®, including Outstanding Variety Talk Series, and has received 23 Primetime Emmys® overall, as well as two Peabody Awards. Stewart hosted the Academy Awards® twice, wrote the bestselling book “Naked Pictures of Famous People,” and co-authored the bestselling books “America (The Book): A Guide to Democracy Inaction” and “Earth (The Book): A Visitor’s Guide to the Human Race.” He wrote and directed the 2014 feature film “Rosewater.” Stewart’s previous HBO credits include the standup special “Jon Stewart: Unleavened,” hosting the special “George Carlin: 40 Years of Comedy,” “Mr. Show with Bob and David” and a recurring role on “The Larry Sanders Show.”