Kim Cattrall on her new TV series, and hitting a 'treacherous' age

A decade after 'Sex and the City,' she's back with a dark comedy about middle-aged angst 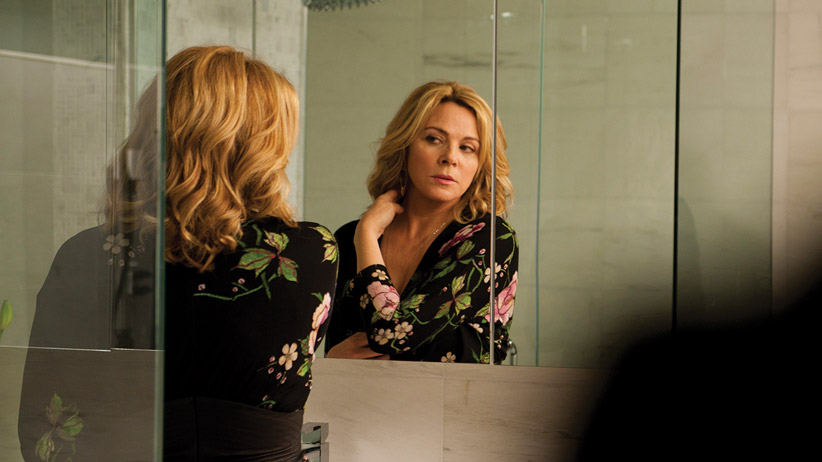 After 10 years away from a TV series, Kim Cattrall is back on the small screen. Her black comedy, Sensitive Skin, launches on Sunday, July 20, on HBO Canada. In the Toronto-based series, the actress plays Davina, a woman going through an identity crisis as she confronts an ailing marriage, a dysfunctional son, a dying mother and all the travails that go with middle age. Her husband, Al (played by Don McKellar, who also directs the series) is equally out of his depth in their new surroundings, a hard-edged condo in the downtown core. The result is a witty, wry comedy unlike anything on television today.

For the launch of the new series, I talked to Cattrall on the phone:

Q: Sensitive Skin was originally a BBC series, starring Joanna Lumley. How did you first hear about it?

A: It’s a woman’s story—that’s what attracted me to the original series. It’s so fresh. I’d never seen anything quite like it when I saw it in 2006. I had a meeting with a really brilliant man over at BBC comedy named Jon Plowman. He’s responsible for Absolutely Fabulous, The Office, The Extras.

It was about two years after Sex and the City finished. I was doing a lot of theatre and he asked me to come in and talk. He said, “There’s this series, they’ve only done six episodes and they want to do six more. I want you to look at the writing; it’s by Hugo Blick and he wrote it specifically for Joanna Lumley. It’s about a woman going through a midlife crisis.” A half-hour comedy? Well, OK, sure, how do you make that funny? Like everyone, I thought it was about a story of a woman going through menopause, but it’s not. I saw the first six, and was completely hooked.

I took it to HBO because I loved it so much, and got a development deal. We couldn’t find the right adaptors—adapting is a very challenging form of writing, it’s taking the best, or things that really resound for the actors and writers and making it your own.

Q: Who is Davina?

A: She has been a woman who hasn’t made decisions that are daring or outside the norm. She wanted to have a career, she met a man, she fell in love, she got married, had a child, the child grew up. The child has been literally shoved out of the nest. Things happened to her. She wasn’t a trailblazer.

She grew up in a time of feminism. I can see her being curious about it but not really understanding it completely, listening to someone like Betty Friedan or Gloria Steinem and saying, “That’s great,” but not really getting out there and participating. We mostly hear stories about the crusader or the victim—where is the story of a person in between, who let events unfold and has regrets, who wanted more of a life, more of an adventure?

Now she’s looking at what she didn’t have. That can be a great sense of life. It’s really a comedy about loss, about going forward but losing something in the interim that is your youth. I think especially for me, and most people my age, it is when you either have a great loss, whether it’s divorce, or a job or a parent.

Both Davina and Al are stuck. She’s the braver of the two because she wants to know why, and time is running out. There’s something in me that’s saying “I need to change before it’s too late.”

It’s really an awakening, that reflects the awakening of youth of being a teenager. This is the other side of it, which is exhilarating but quite treacherous because you’re making decisions now for the rest of your life. You can’t really change.

Q: What is her relationship with her husband, Al?

A: It’s benign neglect. She loves him, and he’s got a great sense of humour; he’s bright and neurotic and completely oblivious of what’s going on. She wants to shake him—they haven’t grown. She’s trying to make that change, to move into the city centre.

Q: Yet he did agree to sell the suburban home and move to a condo downtown.

A: He did it reluctantly; she forced him to do it. It was a long negotiation, because not only does she have her husband, who is ambivalent, she has her son who is totally against it. He’s got her heels stuck in more than anyone else.

Q: You’re 57 now. This is the first series since Sex and the City ended in 2004. How has life changed in the decade since you stopped playing Samantha?

A: I think there was a huge change for me after Sex finished and I decided I was going to work outside of New York. I needed to get away and cleanse my palate. Also, what was being demanded of me was to play Samantha again and again, and again and again. I was offered a play in the West End by Peter Hall. I’d worked with the National Theatre in the ’80s and I wanted to go back to my roots, because the roles in theatre are especially good for a woman my age. That led to another play and another play. These opportunities had nothing to do with Samantha. Every time I would come back in the States, I would be asked to play Samantha.

At that period, I’d found Sensisitve Skin. The only way I will go back to television is if I can tell a story that hasn’t been told, particularly about playing a woman my own age. I wasn’t interested in playing a mom, or someone’s crazy aunt. I wanted to go beyond that kind of archetype, stereotype. I kept coming back to Sensitive Skin because it was a story that needed to be told, and was happening to me.

Q: Davina’s past—popular high school girl, model, Lawrence Park wife who ditched her old friends to go downtown—keeps coming up. She appears to wants to break out of her past, but does she really want to change?

A: Yes, but she doesn’t know how. There’s no roadmap for this. There’s a lot to lose and time is running out. You don’t make good decisions when those are your parameters.

It’s what Betty Friedan calls “the thing that has no name”—it’s like this ennui that sets in. “What’s your problem? You’ve got a husband who loves you, you’ve got enough money because you sold your house, you’ve got a part-time job, what’s the problem?” The problem is you don’t have any contentment. Your life at this point is not filled by what did work before. There is a key change, and you can’t find out what the key is.

Physically things are changing. You’re seeing wrinkles on the face, you’re having to deal with death of loved ones. You feel this change underneath your feet, it’s in every fibre of your being, but it takes a lot of courage to change.

Q: How was getting her look right?

A: There is this thing that happens to everyone: you’re in high school and you have a look—whether it’s a Farah Fawcett hairdo, or frosty pink lipstick, or blue eye shadow, an empire line or a tight pant—whatever it is, you tend to hold onto it. But this woman was a model, and even on whatever budget, they always look cool. Kate Moss is wearing a T-shirt, or a fantastic jacket that someone’s given her, and a bag that’s three or four seasons old, but it’s cool. It’s effortlessness. And that was a tough thing to find.

I didn’t want the bag of the moment—she isn’t a fashion victim. She has her own style but it’s very close to mine. Those bags are my bags, most of what I wore, all the jewellery is mine, most of shoes are mine. The pieces that aren’t mine are largely by Canadian designers. Her delusions are in her head, not in her hemline.

A: Don and I are friends. One of the most challenging things about the series is being one of the other half of a 30-year marriage. We have great chemistry, you feel that you believe the couple, you believe there’s a relationship there, that there’s history there.

We did a lot of improv, we played a lot of volleyball, which is about relying on each other. We brought in a net, I bought a ball, and before each rehearsal we would loosen up, to be fresh, to physically and mentally wake up, to work as a team. This is before we starting shooting. When we were shooting it was an onslaught, we always had the net in the back of one of the trucks but we never pulled it out. We had a really exacting schedule with no fat. We shot all our locations in one place, then went to another. It was, for all of us, a marathon.

I’ve only executive-produced once before; this was a totally different experience. I felt like a wife, a mother, an executive, an actor. There were so many hats. I was always on the set. This was my baby. I wanted to be there to protect it and also to support it.

Q: Was it always going to be set in Toronto?

A: Originally it was going to be New York. My association, because of Sex and the City, is so strong in New York I thought it would be interesting to make it San Francisco, or Boston or Chicago. Then, it became so clear why Toronto was the perfect city because it’s going through it’s own midlife crisis right now. It seemed like a perfect fit of what the main character, Davina, was going through, was very similar to what the city, Toronto, is also having to deal with. I thought it was a wonderful metaphor.

Q: How do you describe Toronto’s crisis?

A: All these condos—this is a new thing—and people are very conflicted about it. It’s not stopping, but going forward in full force, and can be very isolating, like this couple, they’ve left the burbs, moved to the city core.

Q: What do you say to Sex and the City fans wondering about watching a black comedy featuring middle-aged actors?

A: I can’t force people to see it. I think I have a strong fan base, and they’ll be interested in what I’m going to do next and why I took this on. I think it’s also not just a show for women. I think the men are beautifully drawn, there’s a lot of conflict. The men are going through conflict. Theodore the drug dealer, of all the characters, he’s the most conscious and aware and he’s selling drugs on Queen West.