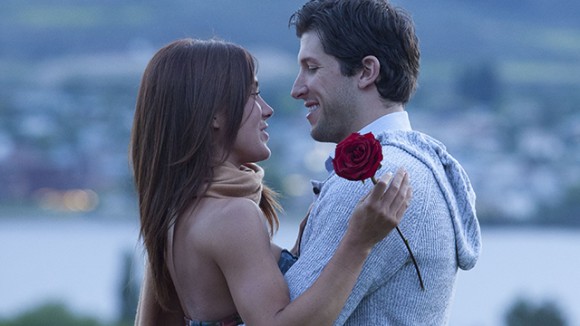 Our Maclean’s Bachelor panel reconvenes to consider what they’ve learned from another hour and a half of The Bachelor Canada. Find all of their panels here.

From: Aaron
To: Sonya, Colin

Well that was a heavy hour and a half. After a preview of the tears to come, it took about 12 minutes for somebody (Britany) to start crying this week. Britany then confessed to Brad that her father had suffered from depression and alcoholism and that as a child she worried about him killing himself. Brad then confessed to Whitney that his best friend had killed himself in university and another friend had died in a boating accident a year later. Then Chantelle’s father called to say her grandfather had died and she decided to leave the show to attend the funeral.

There was also a trip to Paris, in which Laura B. was left behind after being lectured on her insecurity, and a rock climbing adventure that almost made Brad vomit. And then Brad bailed on the rose ceremony. And somehow, having started last week’s episode with 12 women, we ended this week’s episode with only four.

Is this life? I think I ask that question quite seriously. I think I’m supposed to be critical of all this, but maybe this is a fair reflection of life: or what life would be like if you squeezed it all into hour-and-a-half-long weekly installments.

I am in a particularly ponderous mood this week because of something Brad Smith told the Toronto Star last week. “Remember,” he said, “there’s a severe difference between the show and what’s shown on TV.” I think this is a fairly accepted reality of reality television: that professional editing and the need for narrative will likely exaggerate the drama. But it’s still interesting to see the main character of the show admit as much while the show is airing. And it makes me wonder what he now makes of this whole experience (new theory: Brad is a decent enough, if goofy, guy who somehow ended up stumbling into a very weird situation).

Thing is, I think at this point in the show, the viewer knows better than the bachelor: we’ve seen more of who these women are and what they’re about than he has. For instance, Whitney. I’ll be honest, she scares the crap out of me. I’m afraid to even write about her. In fact, I’ve probably already said too much. But Brad, at least on TV, seems to be considering the possibility that she’s the best on offer.

There is a decent chance this will end in tears. But such is life?

From: Colin
To: Sonya, Aaron

Since we started this little adventure of chronicling this program every week, I’ve had very few people admit to me, as they follow every week, that they take the show seriously. This is anecdotal at best, but it strikes me it’s probably that this is the way most people approach it (or the only way they’re willing to admit they do). That is, we all know it’s a bit of fun, and in the end it’s sort of harmless and nobody gets hurt, really. It’s just a television show, after all. And, as Grampa Simpson so accurately noted as the Simpsons watched, worried, to see if Homer would return from space safely: “Of course he’ll make it, it’s TV!”

But then, right in the middle of everything, just as it was getting good, someone goes and dies and things get a little bleak, and, as Aaron is right to point out, very real indeed. More real than you were maybe ready for, and more real than I think reality television has the capacity to actually depict.

Death is, quite simply, a complete reversal of the goal at hand: selling love. Commodifying an emotion is what this show is fundamentally all about. When that’s a happy one, it all seems quite OK, and we all sit around and confess that this is just a guilty pleasure and it’s no big deal and are happy to accept that each kiss and caress is buried in a clichéd setting and book-ended by a flashy commercial for a leg razor or something, because it all makes you feel good about the system you hope you live in. It’s an ocean of comfort you can drift on for an hour out of the week. But when the emotion being presented is reversed 180 degrees, boy does it ever feel weird. You are suddenly standing in very shallow water. Love, you can follow up with an advertisement for lip gloss from Europe. Death, on the other hand, is – quite literally – difficult to follow.

Still, there were learning moments this week. We learned that Laura B’s emotional unevenness was maybe not actually a reminder to Brad of a past relationship so much as it was a mirror at his own past. We learned equally that before they got rid of her, the producers seemed to want to get one more shot of Laura B’s boobs (in that final-night-in-Paris-dress). We learned that Ana’s favourite word is still “deserve” (this week, she “deserved” to model). We learned that Kara is still in this thing (nice call, Sonya). And from Brad, we learned that the distance between Penticton and Paris is approximately half the circumference of Earth, which came as a surprise to me.

And, as Aaron notes, we learned more about Whitney, who, we’re led to believe, is more and more as Gabi describes her: “Evil.” Her arrival at Brad’s room was a surprise, but difficult to buy as a spontaneous action (she had a “good idea” about where he was and then went to the exact door in the hotel?). It was also cheating. And from someone we all suspected was going to do it at some point. And it went unpunished. And the good girls all ended up crying and going home.

Yeah. This is looking a lot like real life.

From: Sonya
To: Aaron, Colin

Pass the antiperspirant. This was hands-down the most action-packed episode yet. Whitney dangled from a cliff! Brad almost puked on her! Everybody cried!

But while you both seemed to decipher some life lessons out of it, my take-away this episode was how to win (I use that term very loosely) on a reality TV show.

We can tell from the final four bachelorettes – Whitney, Bianka, Kara and Gabrielle – that the keys to Brad’s heart are the following:

1. Being a brunette with tanned skin.

2. Leaving him wanting more (best exemplified by Bianka, who is so crafty that even viewers can’t tell if she’s the most or least genuine girl on the show.)

3. Keeping your dramatic confessionals to yourself (Ana, Laura B., Chantelle and Britany all turned the waterworks on and ultimately turned Brad off.)

Picking up on what Aaron said about Brad watching the edited show, I too am very curious (and concerned) about what the experience is like for him. What if he’s already proposed to Whitney (he indicated this week that he thinks he’ll be ready to pop the question to the final bachelorette) and is now watching in horror as she snaps “Brad’s mine,” at the camera every 15 seconds, realizing for the first time that she’s actually a fembot?

But getting back to this question of whether we’re seeing real life reflected in the show, I remain firmly on the “no” side.

Case in point: The choice to keep Gabrielle was interesting to me. We haven’t seen Brad fawn over her with his “You’re such an amazing person” and “I already feel such a connection with you” lines. He had to leave the room before handing out the final rose, which he gave to her after serious deliberation. Did a producer whisper in his ear that Gabi vs. Whitney was a storyline that couldn’t die? It really can’t. We’d be left with nothing but Brad and his various women snuggling in bathrobes, having relationship check-ins again and again.

Next week, Brad is going to accompany the four remaining bachelorettes to their hometowns to audition – sorry, to meet – their families. This means trips to Oakville (Gabi), Calgary (Whitney), Mississauga (Bianka) and Delta, B.C. (Kara). Alas, with Britany’s departure, there will be no trip to Swift Current, SK.

This will be a huge test for everyone, but my final thought for the week is: How is Brad going to impress his chosen bachelorette when a major TV network is no longer footing the bill for his dates? Is there some sort of post-Bachelor charitable foundation I can donate my coffee money to?

FILED UNDER: The Maclean's Bachelor Panel