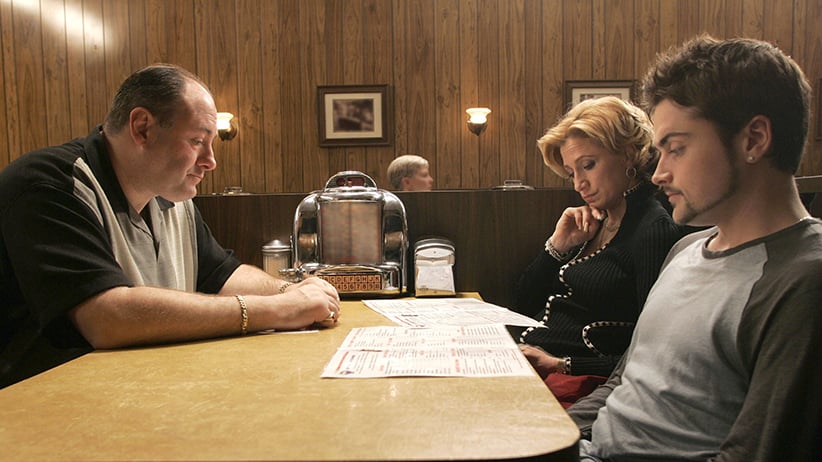 Tony Soprano (James Gandolfini, left) has a meal with his wife and son, played by Edie Falco and Robert Iler respectively, in the closing moments of The Sopranos‘ final episode. (©HBO / courtesy Everett Collection)

The Internet lit up yesterday with a story from Vox about a seven-year-old show. David Chase, the creator of seminal TV show The Sopranos, told Martha Nochimson that his indelible mobster boss was not in fact dead at the series’ much-discussed end. “He shook his head ‘no,'” wrote Nochimson, in response to her point-blank question about his ultimate fate. “And he said simply, ‘No he isn’t.’ That was all.” Chase has since denied it—but that hasn’t stopped the chatter. Maclean’s critics Jaime Weinman and Adrian Lee look at what this all means for the idea of authorial intent, the tyranny of the creator in pop culture, and Spongebob Squarepants.

LEE: So Tony Soprano is … alive? Maybe? Certainly this is a juicy bit of surprising news, not just because David Chase so rarely speaks out these days, and not just because the show ended seven years ago—a lifetime ago, in TV time—but because I’m hearing perhaps retrospectively that there was a ton of controversy over what the series’ end meant. I was under the impression we had all pretty much decided that Tony had been whacked when the series famously ended, with the playing of Journey’s Don’t Stop Believin’ and an abrupt cut to black. Certainly, it was rightly buzzed-about, and it was thrilling, but I thought the ending, especially now, was fairly clear. (Chase’s statements in the interim have mostly hinted that this reading is probably accurate, too.)

So then the real question, I suppose, Jaime: why the heck do we care about this latest bit of news about the fate of Tony Soprano?

WEINMAN: I think the reason people care if Tony’s dead is that people have an interactive relationship with TV—they watch for the characters, not the plot, and they don’t want the characters to be trapped by the whim of the creator. So anything that isn’t explicitly stated on the show will be subject to fan interpretation, whether it’s the relationship of Kirk and Spock (which really ought to be official canon) or what happened after the blackout on The Sopranos. What fans are really saying is that Tony belongs to them, not to David Chase. They’re liberating him from the tyranny of the creator’s plots.

Of course, what Chase said can be read multiple ways, and in fact he immediately clarified that just because Tony isn’t dead doesn’t mean he’s alive. (What a confusing fellow.) But here’s the thing: can there even be an actual answer to this question, given that the ending was left ambiguous? If the creator provides his interpretation, is that any more valid than your interpretation or mine? What do you think? Does anything “count” except what’s on the screen?

LEE: Yeah, it’s the idea of what I like to call “head canon”: the world you imagine from engaging with a piece of art, which can be even more powerful than the one that inspired it. It’s why movie adaptations of books so often fail, because the cast isn’t quite how you envisioned it; it’s why that follow-up to Harry Potter that came out a few months ago was really rather stupid, since it came off like fan-fiction, except it was written by J.K. Rowling. (How do we parse the fact that for Rowling, Professor Dumbledore was always gay? Maybe she’s patient zero for why we can’t trust creations in the hands of their creators anymore.)

So yes, I agree—nothing counts except what’s on screen. But there’s another issue here. When we get ourselves into a tizzy over who lives and dies, even seven years later, inherently we are saying that ambiguity is bad. But what’s wrong with ambiguity? Isn’t there a beauty to it? I’m reminded of a short fiction class I took that talked about the art of the short story (and I think that the best of TV’s golden age in some ways borrows from the tenets of the best short stories: brevity, deep character work, a rise in action, and very often a messy, sudden ending). In short fiction, you’re told to have a major event happen; for bad short story writers (two thumbs at this guy), death is often the fallback.

So for me, this is a question about our craving for neat endings, which often means death. Leading up to Breaking Bad, for example, the question was who is going to live and who is going to die (people even had checklists for betting with). And look at Mad Men, which really doesn’t have a whole lot to do with death-as-plot-point (with some notable exceptions), and everyone’s presuming that Don Draper (or someone else noteworthy) dies. Why are we so obsessed whether someone lives or dies? 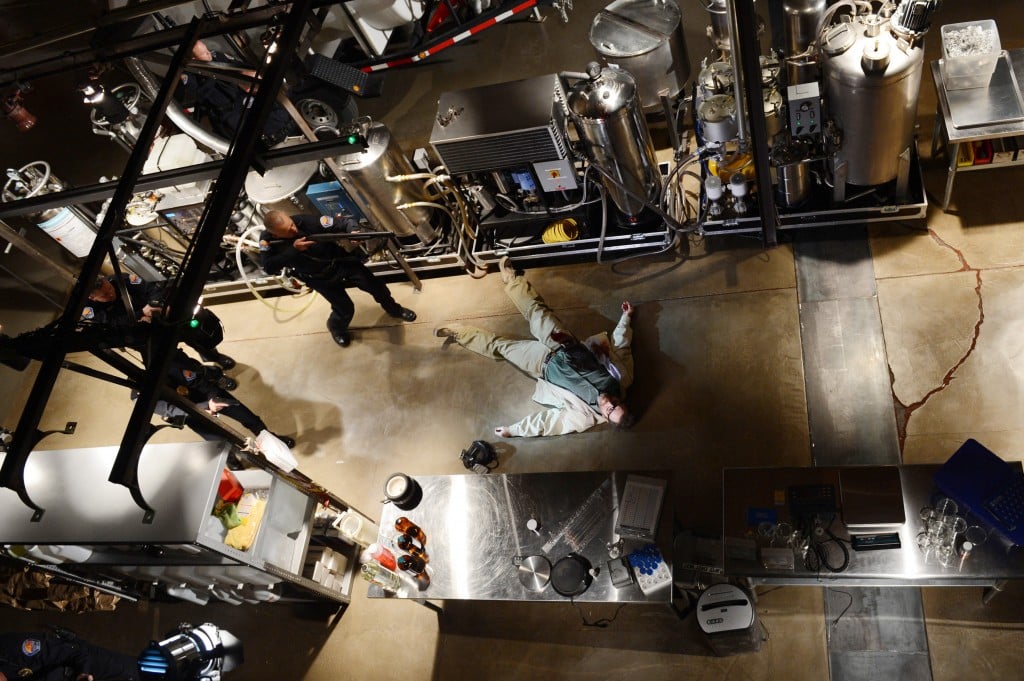 The final shot of Breaking Bad, showing Bryan Cranston’s Walter White lying on the ground. There has been fresh talk of whether or not White is indeed dead (Photo: Ursula Coyote / © AMC / Courtesy Everett Collection)

WEINMAN: Well, death is the ultimate expression of the creator’s power over a character. It reminds us that we, the consumers, don’t get to decide what happens to the character. The writer does, and we just have to go along with it. That can be frustrating, but it can also be very satisfying. If a character doesn’t die in the end of a series, then his fate is never truly decided; as we’ve been saying, the author’s statements don’t really count, so if Vince Gilligan tried to tell us that Walter White’s wife Skyler remarried or turned to crime or whatever, we wouldn’t believe him. But if someone dies, then his story is truly over. So naturally we’re obsessed with it: it is truly final and leaves us with no other options to imagine how they ended up (unless it’s a soap opera, then even death isn’t final). Death in TV is the only thing that scares us—or, if we hate a character, gives us pleasure.

Of course, sometimes a character can die and we still won’t believe it. Look at the fan theories that the final episode of Breaking Bad wasn’t real, but rather Walt’s fantasy of how the end of his life would go down. (It would explain why he spends most of the episode winning at everything.) This kind of theory can’t ever be proved, but TV fan theories have sort of replaced theology as the unprovable thing we love to argue over. Do you have a favourite fan theory about a TV show or character?

LEE: I kind of love the one about how the Jetsons and Flintstones operate in the same universe, and it’s a commentary on income inequality. Also the one about how Spongebob Squarepants‘s Bikini Bottom is the reef below the real-life Bikini Atoll, which is where nuclear-arms testing happened in the ’40s and ’50s, and thus explains a talking sponge and his squirrel and starfish friends. I guess really I just love that even cartoons have become co-opted into this idea that the author is dead, and long live reader interpretation (as per the New Criticism ideology popularized by Ronald Barthes, who famously made the claim that the author is dead).

Fan theories can be a good thing, though. There’s an argument to be made that the new interest that came from HBO’s Game of Thrones show has created so much buzz about how the thing ends—adding fuel to the already-fervent and nerdy fan base of the books—and George R.R. Martin has kind of sheepishly admitted that one of the fan theories is correct (with many throwing to this SPOILER-FILLED one). Also there’s this amazing story today about how George Lucas can’t be trusted with his own Star Wars universe, given that people are trying to restore his movie to what it was in 1977, before he changed it radically.

I align myself mostly with the idea that the author is dead in TV and film, but with the viewer having the right to pick and choose. I choose to believe Tony’s dead. I think creators have fun with it, though. At the Emmys, for instance, Billy Bush asked Bryan Cranston about the “hot topic” of whether Walter White was dead at the end of Breaking Bad, which I found odd because I thought everyone agreed he was, and Cranston kind of hemmed and hawed and claimed there were two camps, when really I think it’s obvious. But ambiguity is more fun, isn’t it?

WEINMAN: To me the important thing is enjoyment: whatever helps you enjoy the piece more, you should listen to. Sometimes, for example, poems are more enjoyable if you read the author explaining what he or she meant. It’s the same with a complex TV show. Some of these shows are confusing. Sometimes you don’t know exactly what happened or why people did what they did. For all the celebration of ambiguity, sometimes art is a better, richer experience when you understand what the hell is going on—which is why the author’s comments can make you feel better about what you’ve seen. Maybe it’s better to think and ponder and realize that there are no explanations. Sometimes you just want to say: explain this thing to me, because I don’t get it. Nothing wrong with that.

The thing that frustrates creators is that people demand definitive explanations for everything, even things that were deliberately left open-ended or unresolved. Chase thought he was leaving The Sopranos open-ended because that’s Just Like Real Life, don’t you know. Instead, many if not most fans pored through the episode and the entire series looking for clues about what “really” happened, insisting that there must be a definitive solution, even though Chase’s whole point was that there was no definitive solution. It must drive him crazy that we, the viewers, mostly watch complicated serialized TV as if it were Murder, She Wrote, and if Angela Lansbury doesn’t show up to explain what happened, we’ll explain it ourselves. But that’s what happens when you make a TV show. It’s out of your hands, and no matter what your message is, the fans will create their own.

LEE: Ultimately, the reason I’m so bemused about this latest turn is this: let’s say David Chase misspoke and he’s embarrassed by it coming out (which may yet be true, given his denial in the wake of this story is kind of a non-denial denial. Now what? James Gandolfini, unfortunately, is indeed dead. There is no chance of another season, like that story that went viral after the Emmys among people unable to parse through obvious satire that claimed Vince Gilligan was going to make one more season of Breaking Bad after all (alleged plot line that people fell for: “Season six begins with Walt waking up in the hospital, handcuffed to his bed … We’re even introducing a few new characters, one being a little comedic relief in a mascot for a Christian organization named Fappy the Anti-Masturbation Dolphin.”)

WEINMAN: Look, we all know that, as the late writer Dwayne McDuffie pointed out years ago, every TV show was actually dreamed by the kid from St. Elsewhere. So all this is moot.