Mad Men: An elegy for an elegy

It's the final season for the artful, stylish show. But the end of the series doesn't really matter—and that's kind of the point 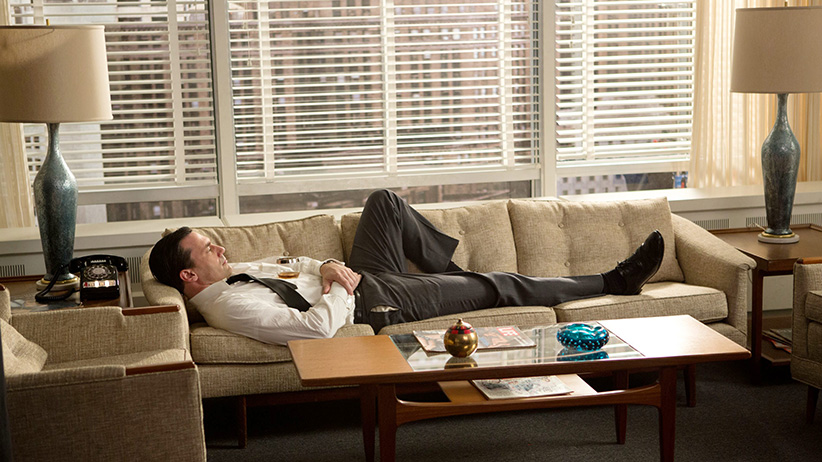 NOTE: Spoilers follow for those who are not caught up to Season 7.

Mad Men‘s final season starts on Sunday–in two halves, of course, because even a show this lovely is forced to operate at the whims of its cash-first executives–and so the critics stretch their backs and crack their knuckles and get to the prognostications. Who is the falling figure presaged in the opening credits? What’s going to happen with the advertising firm, now that it’s gotten the big Chevy account and is opening a California bureau? Will Don find happiness?

But here are the more important questions: For Don, what is happiness? Does it matter if it’s an actual character who falls down a literal building? Is it okay for the series to merely be an existential and literate exploration-for-the-sake-of-exploration about the spiritual rise and fall of a man, rather than a sniffing out for clues about how the whole thing wraps up?

That’s perhaps the best expression of a show that’s unique for this reason: the plot has never mattered. If it mattered, we’d wonder reasonably about why characters who move in and out of the series get no closure, as few are lucky to get it: recall the off-screen death/cruise-ship plunge of Pete’s mother, or the sudden fadeaway of Joan’s rapist husband, or the abruptness of Lane Pryce’s suicide, and the abruptness with which the characters moved past it. If it mattered, the show wouldn’t merely linger languidly over whole episodes in which Don doesn’t do much more than drink, flirt, and have stilted exchanges with other characters. If it mattered, we’d have legitimate questions about how neatly Don’s great secret–that he is not who he says he is–was basically tied up at the end of the first season, killing the most serious of stakes. If this was a TV show where the plot was king, Don would’ve murdered Pete Campbell to push the story along with all the shock-value vicissitudes of a Shonda Rhimes series.

No doubt, great shows like Breaking Bad and The Wire and The Sopranos–the show with which Matt Weiner cut his teeth–are artful and literate, but in a way that follows the rules of the television world they’ve created. Viewers who watched those last seasons sought finality and closure, the wrapping up of stories and arcs, and largely got that. On the other hand, Mad Men is that rare show where finality would actually seem cheap. The literary allusions–Emerson here, Cheever there, a read of Frank O’Hara–aren’t so much clues to an end, but rather the tools of exploration. It is perhaps the most popular intentionally art-for-the-sake-of-art show since Twin Peaks, which premised itself on a somewhat straightforward plot-driven whodunit–who killed Laura Palmer?–and then fairly quickly resolved that question and chose instead to contentedly and artfully revel in the characters and the spooky world they’d built. It knows what it wants to be, which is a languorous, carefully crafted piece of art, a show that grapples meaningfully with existentialism instead of merely flicking at it (hi there, True Detective!), a show unafraid of its intellectual bona fides, and a show that probes, without necessarily laying judgment on, these humans at this junction of American history, the innocent moments after the heady 1950s but before 1972’s Watergate, that moment idealism meaningfully died. The sumptuous visual style is merely the sugar that makes the medicine go down; it’s easier to consume something complicated if it’s wrapped like a Hershey’s bar.

What we’ve seen on Mad Men isn’t a plot hinged by made-for-TV-moment keystones; think back to seasons past, and it’s near-impossible to remember what happened in individual episodes. If you had to explain what happened last season, even, you’d want to describe the major moments, but that would be like saying Moby Dick had some scenes where a man hunted down a whale. It leaves out the value of watching the show: pure portraiture, explorations of a canvas with careful brushwork, never delivering the payoff expected of TV shows because it’s never really been promised. The fact that that won it popularity in the mainstream is its true triumph. When it’s over, there will be a void.

So what to watch for, as the show rounds the bend to its conclusion? Well, Don is certain to grapple more than ever with the one through-line of the show, the fact that he has been living a lie; he’s lost the trust of his daughter, his job, and his second wife. We also know that the show is headed to California, and that the smell of doom is redolent on not just Don but also the whole firm, because the big Chevy account is for the Vega, seen as one of the biggest busts in car history. Otherwise, we’re left grasping for straws, and looking somewhat foolish for doing it. For instance: much ado has been made over the (somewhat heavy-handed) beginning of Season 6, where Don read aloud the first stanza of Dante’s Inferno, the first book of the Italian poet’s The Divine Comedy, and it’s rightly sent viewers flocking to find plot points and clues for where the series is going. There are so many similarities to be drawn, sure, from the highbrow (it is a man’s descent through a world of sins, but it is also about a natural order of things, and how an imbalance of that order can result in the despair of the mortal soul) to the low (Don! Don-te! Whoa!)

But here’s an oft-ignored parallel to be shared between The Divine Comedy and Mad Men: Dante’s epic poem does not really have an end. After a long, profound journey, he reaches the peak of Paradise, and there finds an ineffable face he cannot begin to fathom. There is no evidence of what happens to Dante afterward; really, there’s no evidence of what happens to Dante when he looks upon God. The poem merely ends with sudden, divine understanding, and Mad Men audiences would be wise to heed the fact that it, like The Divine Comedy, is about the journey and the understanding, and not the neat finality of a destination:

“Like a geometer who sets himself
To square the circle, and is unable to think
Of the formula he needs to solve the problem,
So was I faced with this new vision:
I wanted to see how the image could fit the circle
And how it could be that that was where it was;
But that was not a flight for my wings:
Except that my mind was struck by a flash
In which what it desired came to it.
At this point high imagination failed;
But already my desire and my will
Were being turned like a wheel, all at one speed,
By the love which moves the sun and the other stars.”