Some thoughts on the 'midseason finale' 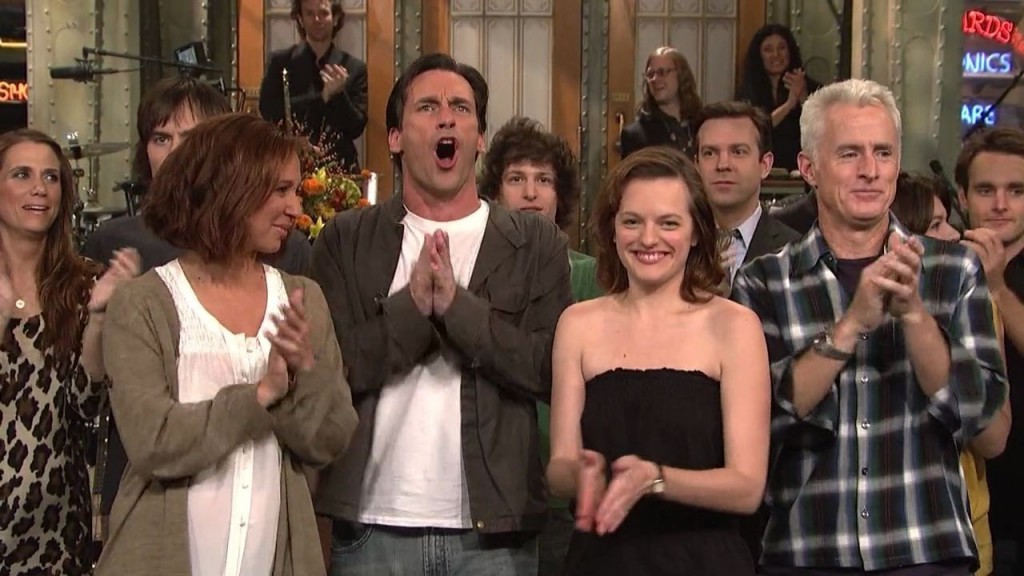 Spoilers follow for Mad Men‘s “midseason finale.” The “midseason finale” is basically a fake marketing term created by networks to make us feel like something special is happening just before the series goes on hiatus. But fake marketing terms are not inappropriate given the subject matter of this show; you can certainly see how several of the characters could come up with that term on their own.

One of the foundational beliefs of TV executives is that audiences will accept any number of flaws in a lead character – we will, in fact, accept a lead character who is a total creep – as long as he’s good at his job. Not just good, but “the best.” That’s why so many shows are about leads who are great at their jobs but can’t get it together in their personal lives (well, that, and that’s the way writers and executives may see themselves), and that’s why most anti-hero dramas are about characters who are revered for being the best in their profession. Walt White wasn’t just a manufacturer of meth, he was a genius at it, the creator of the best meth there ever was; he turned to crime partly because the criminal world recognized his greatness and the law-abiding world did not. And Don Draper of Mad Men wasn’t just an advertising huckster; he’s a genius huckster, a man spoken of in hushed tones by his co-workers, able to leverage his personal flaws and emotional coldness into an ability to package and sell emotion to other people. He was to advertising what Hannibal Lecter is to cannibalism.

But this season of Mad Men has been about testing the theory that Don is a genius, or at least that he’s still a genius. Whether it’s because of his increasing inability to separate himself from his own life and stand apart from the world (his downfall at the agency, remember, came when he broke down and told the truth about his life instead of making things up), or just the changes in the world that make his methods less useful, he’s spent the last seven episodes fighting against the perception that he’s lost his relevance in the business. His arch-nemesis, Cutler, brutally tells Don in this episode that he was a legend in the business, but seen up close, he’s just “a bully and a drunk.” And one of the enjoyable things is that even though Cutler is a jerk, he’s not entirely wrong about Don.

Don has been a diminished figure this season in all kinds of ways, even when the increasingly Kubrickian visual style of the show isn’t making him look insignificant. He’s got his jacket off a lot more and is working with people at the company in a sort of limbo, not quite their superior, not quite their colleague. His position is dependent on the decisions and manipulations of other people, mostly Jim and Roger. His emotional connection to the company is cut off when Bert Cooper dies (why do old guys in charge of a fictional company have this habit of dropping dead every time there’s a big decision to be made?). He lives the life familiar to a lot of TV writers working out the end of a development deal: assigned to projects, given an office, but treated with obvious contempt and condescention even by the people who support him. He’s still talked of by some characters as a genius who could go to another company and compete with them, but it doesn’t seem like he believes that, or that we’re supposed to believe that. He seems, at least for the moment, a little past his prime.

And he also knows, and acknowledges in this episode, that he’s not unique, that it’s possible for other people do do what he did. He passes the torch to Peggy, who offers up a true Don Draper presentation: the exploitation of anxiety about social change, the gooey nostalgia for an imagined better time (except the better time is now the period when the show started, the Eisenhower-Kennedy era), the co-opting of current events into the pitch, and of course, using real details from her life to peddle a false picture that appeals to the client. It’s all there, and you don’t have to talk about whether Peggy is “becoming the new Don” to realize that he can be replaced. The experience is not the same for her as it was for Don, as we see from the to-be-much-discussed POV shot, making us feel what it’s like to be a woman making a pitch to a room full of men. And I don’t think the show is being so facile as to imply that she’s as emotionally empty as Don, simply because she works like him. Still, just like Jesse on Breaking Bad was the protégé who made his mentor expendable in his own business, Don is encouraging Peggy to take over where he left off in appealing to people’s fears, longings, and nostalgic yearning.

Don is surrounded by people who can replace him, in work and in their lives; he’s even got to deal with the ’50s and ’60s ultimate symbol of humans being replaceable, a computer. (The panic over a computer in the office is, like a lot of bits on Mad Men, sort of a serious version of a plot from ’50s and ’60s sex comedies; in this case, the Tracy-Hepburn comedy Desk Set is a probable point of reference.) His reason to exist has always been that he’s good at his job; now he may not even have that. And the sale of the company, while it theoretically saves his job, also traps him in the aspects of the job he doesn’t enjoy. Worse, it’s based on his past reputation and past achievements; instead of being valued for the work he can do now, he’s valuable to the company only as a sort of symbol of his past genius.

No wonder he ends the episode hallucinating a dead man, communicating with him through popular music, the only form that can compete with advertising for its ability to package and exploit people’s emotional desires. The closing musical number will undoubtedly get a lot of comment: a lot of people will love it, some will find it silly or too on-the-nose. Others will argue if it means Don has a death wish or that he simply wishes he could get out of this business and do something else. Mostly, though, it’s an example of what TVTropes calls “the cast show-off,” where a TV show puts something in because a performer’s talents are simply too valuable to waste. Robert Morse is a veteran musical theatre performer, so before he has to leave the show (due to his character being dead and all), he gets one big chance to show what he can do.

The song selection, with its references to the moon and the stars, obviously was made to tie in with the framing device of the episode, the 1969 moon landing and what it means to people. In the context of the episode, it means all kinds of different things. For Don, as the song suggests, it’s about freedom and breaking out of a rut to try something new, or maybe just a wish to escape the Earth entirely and stop living. In Peggy’s pitch, it’s another symbol of scary change in the world, which the advertising campaign can promise to counteract. And like a number of real-life events incorporated into the show, it’s a little bit about false hope and false promise, since we know in retrospect that this amazing achievement didn’t really chance a whole lot about the way people live. You can try to escape to the moon, but you’re still stuck in your earthly grind.

A couple of additional notes about the episode:

If Peggy is being pushed as Don’s replacement, then this episode gives off strong hints that Sally is becoming more like her mother, to the point of beginning to parrot a man’s opinions instead of forming her own. How far the show wants to go with this rather depressing path, I don’t know, but it would certainly fit the series’ basically depressing narrative about change: a lot of it is only surface change, or change for a few exceptional people, and otherwise people will still end up being like their mothers and fathers.

Finally, no performer from Mad Men has ever won an Emmy, and that’s not likely to change for poor Jon Hamm or Kiernan Shipka or many other actors; the slightly detached acting style the show demands simply doesn’t give them enough opportunities for showboating moments that can impress Emmy voters. It’ll be interesting to see if this episode can change anything for Robert Morse; his part in the episode, while not large, was showier than usual even before they got to the big musical production number.