As Mad Men's final season gets underway, it’s the clothes that have told–and will tell—the story 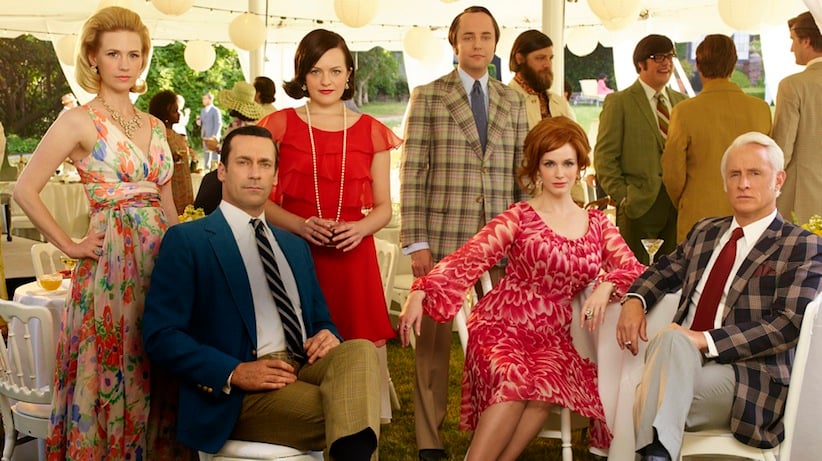 When the last run of Mad Men episodes began on April 5, we could tell the characters had changed without hearing them say a word. All we had to do was look at the clothes. Roger Sterling (John Slattery), once the epitome of the 1950s advertising man in a grey flannel suit, was wearing a ruffled tuxedo shirt and a colourful sports jacket—not to mention sporting an enormous moustache. The two main female characters even got into an argument over how they currently dress and why. The 1960s have become the 1970s on Mad Men, and what the characters wear tells us how they’ve reacted. It may be appropriate that Mad Men’s costume designer, Janie Bryant, is currently having her work showcased in an exhibit at New York’s Museum of the Moving Image: Few shows have made it clearer how much storytelling is done through the way people dress.

Although Mad Men’s costumes, like its actors, haven’t won a single Emmy, they’ve been the show’s calling card, along with the authentic 1960s hairstyles and props. Much of its early popularity was for its revival of three-piece suits and other early-’60s fashions, and its winning streak in the Best Drama Emmy ended around the time it abandoned those fashions in favour of late-’60s looks. And the impact of the storytelling often has to do with the clothes. Bryant told the New York Times that the dress Megan Draper (Jessica Paré) wore at a party in the season-five premiere was important because “it was the first minidress on Mad Men, ever.” As much as the script or acting, the dress conveyed how Megan thought and acted differently from women only a few years older than she was.

The closer the series gets to ending, the more the characters have become synonymous with what they’re wearing. In the promotional art for the new season, Don Draper (Jon Hamm) mostly wears conservative suits and ties, while other characters around him are going plaid. Designers often see this as an important advantage of the continuing-series form; through the way characters dress, we can actually see how they change or how they resist change. Cynthia Bergstrom, costume designer for the show Buffy the Vampire Slayer, told blogger Colette Fitzpatrick that her team dressed the title character according to where she was in her character arc: “She started out in the ﬁrst two seasons wearing miniskirts and super-bright colours,” she explained. By the end of the show, “she wore darker, more serious pieces and cozier clothing that gave the feeling of self-protection.”

Related: An elegy for the elegy that is Mad Men‘s final season

TV shows also depend on clothes for another, simpler reason: They get attention. On the biggest new hit in television today, Empire, one of the most popular characters is Cookie (Taraji P. Henson), a music boss and ex-convict who is characterized by her loud taste in clothes: feathers, leopard prints and a different fur coat almost every week. The network created a web feature called “Cookie’s Closet” for people interested in what she was wearing in each episode, and clothes merchants have offered online sales of her outfits of the week. This kind of publicity is why shows will go out of their way to get the characters in snazzy outfits. In a long essay about his experience working on the early seasons of Lost, writer Javier Grillo-Marxuach (The Middleman) explained that the show’s format included ﬂashbacks because they “allowed us to put the characters in clean, fashionable clothes and spectacular hair.”

Not that every successful show has to have great clothes: The Walking Dead is cable’s most popular drama, and everyone is in drab outfits. And the power of clothes to convey a time period instantly, which works for Mad Men, can be an unexpected problem for a contemporary show: When Friends celebrated its 20th anniversary last year, mockery of the ’90s fashions—with listicles like Buzzfeed’s “Chandler Bing’s 19 Most Heinous Outfits”—was common. But even when clothes are remembered derisively, they’re still the first thing we think about. The costumes from Bryant’s Mad Men exhibit will soon move to the Smithsonian Institution in Washington. There will also be a script from the show—but just one. It’s clothes, not the scripts, that define it.

Follow Macleans.ca every Monday for a recap and analysis of every episode of Mad Men‘s final season.