Martin Short on CanCon, comedy and the CSAs

After a show-stealing performance at the inaugural Canadian Screen Awards, Martin Short is returning as host for this year’s gala 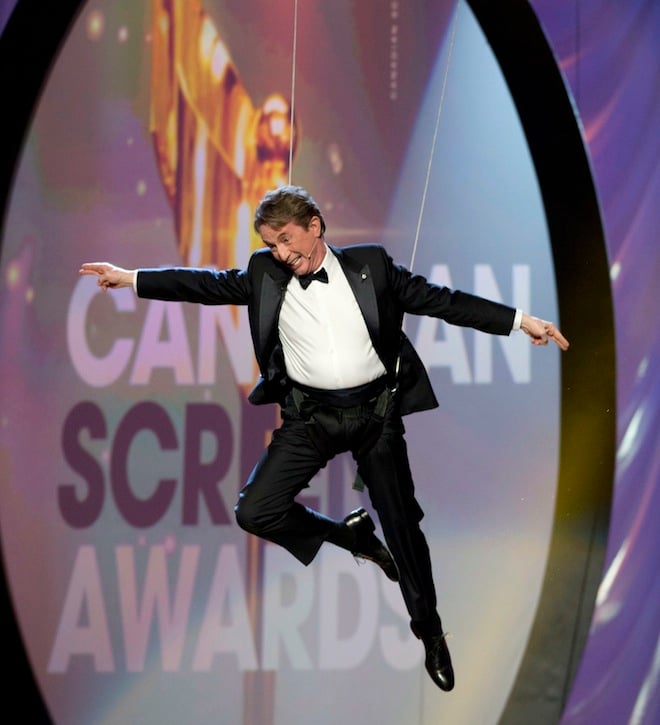 Martin Short flies through the air as he hosts the Canadian Screen Awards in Toronto on Sunday, March 3, 2013. (Frank Gunn/The Canadian Press)

After a show-stealing performance at the inaugural Canadian Screen Awards, Martin Short is returning as host for this year’s gala, airing live on CBC on March 9 at 8 p.m. ET. The CSAs aren’t the only small-screen project on Short’s radar, though, as the 63-year-old is also filming a new Fox sitcom, courtesy of his old Saturday Night Live friend, Lorne Michaels. Here, the Hamilton, Ont., native talks about CanCon, comedy and the eternal pact between performers and audiences.

Q: Why return to the Canadian Screen Awards?

A: Last year was fun, and it seemed to go well—at least, I had a good time. I have a general philosophy that says: look at the successful people who are hosting, and if you wish they were on stage even more, then that’s good enough. The other trick is to remember that it’s not your TV show, it’s not your concert. It’s not “An Evening with Marty!” You’re there to warm up a group, and the stars are the people who are nominated. It’s not about competing with the Oscars, or even competing with yourself.

Q: Do you have a strategy for the CSAs this time around? Last year seemed to be pretty successful—some critics called it the best part of an otherwise long evening.

A: It’s all very broad. I mean, look at the Oscars, which have 10 times the budget—the budget affects what you can create, what you can go for. Some of those films Billy Crystal made would take weeks. I’ve been working with the writers, but I’ll also just show up Saturday and aim for what’s realistic.

Q: It’s easy to complain about the lack of a Canadian star system here, which in part seems to be why the CSAs were created. Is there a simple fix, though?

A: You have to be a little realistic. The fact is some of these films [nominated] have a budget of $800,000 as opposed to something like Night at the Museum 6. But what’s great about an evening like this, like last year’s show, is the ratings were so much higher [than the Genies or Geminis], and that draws attention. People will actually go out and see the films. The Tony Awards are a good example to compare: Their ratings may not be huge by Oscar standards, but the people who tune in are highly interested in the medium, and you will see theatre ticket sales jump after.

Q: How is work going on John Mulaney’s new sitcom with Lorne Michaels? What’s it like to be involved in daily TV production again?

A: I haven’t done a sitcom since 1980, but I got a call from Lorne, who told me John had a great project, and was I interested in reading it? I thought it was hysterical. [On a sitcom set] your day is not too bad: 10 a.m. to 4 p.m. for four days, and then the fifth is probably 11 a.m. to midnight. The scenes in front of a live audience can be daunting, but after you do it so many times, the audience becomes a catalyst or observer as the filming progresses. It’s not, “Please love me!” but instead the audience is there to help you.

Q: So you prefer live-audience sitcoms over single-camera shows with no laugh track?

A: The reality is, those laugh-track-free shows are not wildly successful. The big hits that exist on TV today, they’re Two and a Half Men. People like to feel that they are a part of something, that they could have been there. There’s not really one example of a single-camera comedy that’s cracked the top five.

Q: You’ve gained critical acclaim for your role on Damages. Would you like to pursue more dramatic work?

A: You never say never, but I do think the audience, especially if you’re doing this for a while, has made a kind of agreement with you, and if one of those deals is that you make them laugh, then that’s a real compliment. As a kid, I remember watching Ed Sullivan, and there was an impersonator who was a regular, George Kirby. One week he came on the show and just sang a song, because he wanted to be taken differently. I got up and said, “Let me know when he’s being funny again,” because that was my deal with him.