Meet the New Press (same as the old press)

NBC's "Meet the Press," one of the Sunday morning news dinosaurs, is trying to change its image... with Luke Russert and Joe Scarborough? 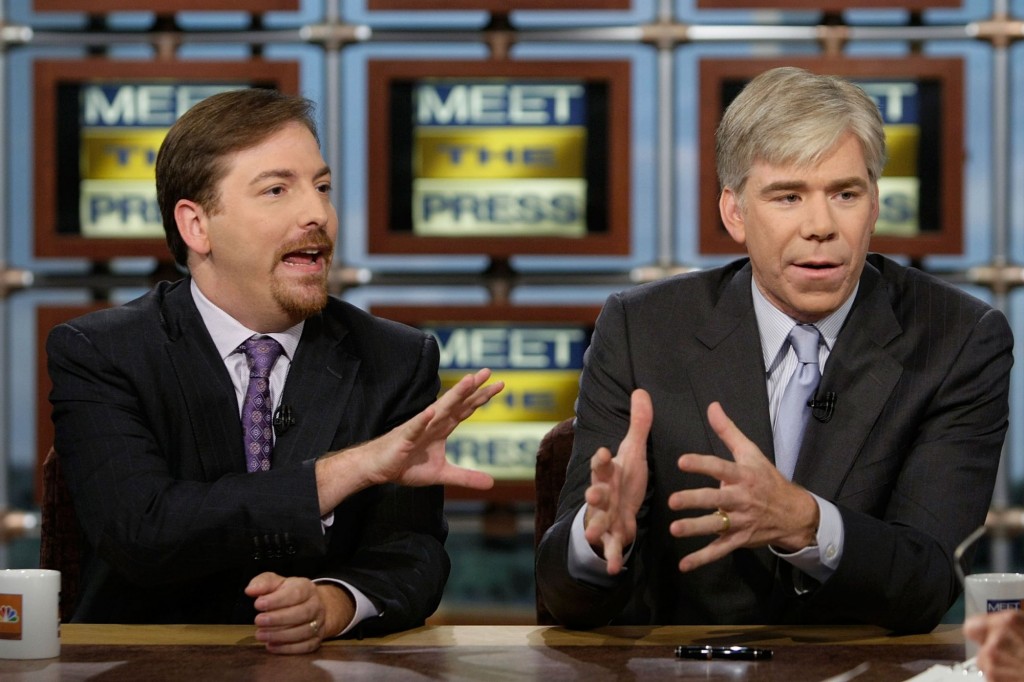 We talk a lot about how late-night comedy shows are an antiquated form, where people care more about the comings and goings of the hosts than the shows themselves. But that’s really nothing at all compared to the Sunday morning news show, and particularly NBC’s Meet the Press. This show is incredibly important even though it’s been denounced as obsolete since at least the ’80s, even though its audience tends to be very old, and even though people on both the right and the left constantly make fun of the show, the hosts, and the guests.

Yet when new moderator Chuck Todd made his debut this Sunday, it was big news. The ratings didn’t move that much — up to 2.9 million viewers from the usual 2.4. But all the major press outlets reviewed Todd’s performance, his interview with President Obama, his handling of the panel discussion. And that’s a clue as to why Meet the Press is so important: because even though it’s not all that influential or popular, it’s very influential and popular with major media outlets and politicians. Reporters watch the show. Politicians watch the show, or its slightly less prestigious competitors on other networks.

These shows, to some extent, help set the bounds of political discourse. When the Sunday shows are leaning in one direction, as they were during the run-up to the Iraq invasion (where they tended to lean right) or on social issues (where they tend to lean left), they seem to define whatever the conventional wisdom is supposed to be at a popular time. They tend to draw from a relatively small pool of guests who are considered to be not too far to the left and not too far to the right; the most famous example is John McCain, who practically lives on the Sunday shows, and who managed to appear on network Sunday morning shows 22 times in Obama’s first 17 months in office. Whatever the Sunday shows choose to do can shape the way these issues are reported.

This is one of the reasons why the left and the right both get annoyed by shows like Meet the Press; their influence is all out of proportion to their reach, much as there are some comedy and drama shows that aren’t very popular but are imitated by everyone. Another reason is that these shows fancy themselves above the categories of left and right. Conservatives point out that the hosts are usually Democrats, and sometimes Democratic political operatives like ABC’s George Stephanopoulos. Liberals argue that the composition of the panels and guests tends toward conservatives, particularly old white male conservatives. Nobody takes them seriously when they act like they’re just middle-of-the-road straight-shooting examinations of what’s going on in the world — nobody, that is, except people who “matter.”

So one of NBC’s additions to the Meet the Press panel is Joe Scarborough, a Republican politician and MSNBC host who is pretty much despised by the right and the left. The right despises him because he’s the kind of conservative who constantly takes liberal positions, which is why it’s hilarious that NBC reportedly considers him someone who will appeal to conservatives. The left despises him because he is a Republican who takes up a large chunk of air time on what’s supposed to be the liberal network. But NBC sees him as a rising star, because in the U.S. journalism business, someone who annoys both the left and the right is considered a very valuable commodity. If you annoy both sides, the thinking always goes, you must be doing something right. That fake moderate tone, the idea that there is a limited window of acceptable opinion, is part of the whole point of Meet the Press; it’s a holdover from the time when TV news had more power to set the agenda than it does now, but it still has some of that power left.

That need to be seen as above the political process, above categories, also explains why the journalists who watch Meet the Press place such a high premium on “authenticity,” on seeming like something other than a journalist. In Chuck Todd’s debut show, he received the highest praise for a somewhat old-fashioned gimmick, where he showed Obama a list of his broken promises (the sort of “political theatre” Obama probably loathes). Several reporters said that this made him look like a plain-spoken, unpretentious man of the people. Now, Chuck Todd is no such thing; he is a veteran NBC news correspondent, and you can’t be a media star and a plain-spoken man of the people at the same time. But it’s expected that the moderator of Meet the Press have that air of not being what he is. The longest-running Meet the Press host, the late Tim Russert, was even more famous for this kind of thing. Even though he was a highly educated lawyer who was active in Democratic politics before becoming a reporter, he always played up his blue-collar roots, not merely in a nostalgic way, but as if he were still a blue-collar guy.

None of this has a whole lot to do with enlightening or educating the public about the events of the day, but projecting an image of being an outsider, even though these shows are populated and mostly watched by insiders. That’s what a show like Meet the Press arguably represents: the dream of U.S. political journalists, of being a hard-hitting guy (mostly always a guy) who asks tough questions of the powerful and is really one of the people at heart. It’s kind of a hard dream to maintain when you’re watching a show where inside-the-Beltway conventional wisdom reigns, and where Luke Russert is being promoted to a panelist simply because NBC loved his father so much (I’ve described him as the poor man’s Allison Williams, and I think that’s fair). But that’s one of the reasons the show’s importance endures: just like Jimmy Fallon represents the performer’s fantasy of being a delightful chap who loves popular culture and stars, Tim Russert represents the reporter’s fantasy of being the last truth-teller on the air. We’ll just have to see if Chuck Todd can live out that fantasy as effectively.