After star turns on cult TV shows, two comedy giants are back on 'W/ Bob and David'—and they're in fine form 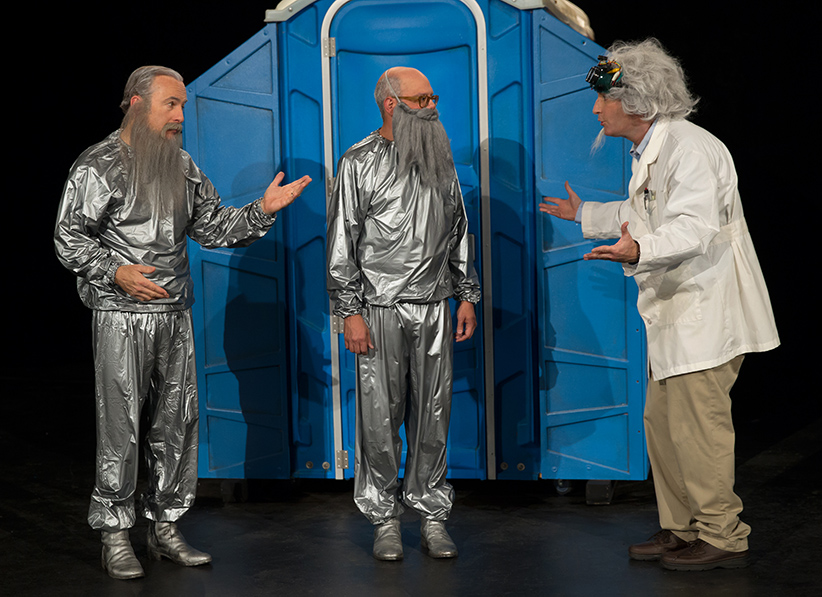 A still from ‘W/ Bob and David.’ (Saeed Adyani/Netflix)

Talking to a Canadian reporter in the hangover of the federal election, the first thing comedians Bob Odenkirk and David Cross do is compliment the discerning taste of the Canadian electorate. “Congratulations on your new Prime Minister!” Odenkirk offers. “He’s incredibly handsome!” Yes, just as the “Crimson Tide” rolled across Canada, ushering in a new era, so too has a new day dawned for Bob Odenkirk and David Cross.

See that last sentence? Notice how it laboriously connects two ostensibly unrelated things? That’s what the sketch comedy biz calls a “link.” Even more than its sarcasm and patent silliness and razor-sharp satirizing of Gen-X youth culture, it’s the links that defined Mr. Show With Bob and David, Cross and Odenkirk’s mid-’90s HBO sketch show, which gets a revival on Netflix this month. Influenced by the comedy of Monty Python, Mr. Show would weave one sketch into the next and into the next, resulting in a maddeningly complex latticework of overlapping jokes. “Our goal, every time, was to have them be funny on their own,” says Odenkirk. “It was a wonderful and weird and big comic goal. But in the end it was a big pain in the ass.”

When it premiered, Mr. Show seemed destined to be lost. It was given a small budget (something Cross mocks in an early episode) and late-night time slots on a premium cable network: pre-Sopranos HBO, before everyone had it or wanted it. “We were on midnights on Friday nights, then it was midnights on Mondays. We were barely on HBO.”

But in the nearly two decades between Mr. Show and their new Netflix series, Cross and Odenkirk found their way to prime-time TV. Cross’s absurdity found its perfect home in Arrested Development, where he played the deeply closeted therapist/entrepreneur Tobias Funke. Odenkirk channelled the hyperactive greaseball businessman he perfected on Mr. Show as the unscrupulous, ambulance-chasing attorney Saul Goodman on Breaking Bad and then Better Call Saul.

Where alternative sketch comedy—meaning something other than the staleness of Saturday Night Live—was a cult concern in the mid-’90s, the recent success of programs like Key and Peele, Inside Amy Schumer, and Tim and Eric Awesome Show, Great Job!, led to a more mainstream boom in sketch comedy. Short, punchy sketches were perfect for the Internet age. A number of the shows were influenced by Cross and Odenkirk—for a few generations, mainlining Mr. Show on DVD has been a dorm room rite of passage.

Cross and Odenkirk’s new four-episode sketch run, W/Bob & David (they couldn’t wrest the original title back from HBO, and the new one seems like a typically snarky affront), seems calculated to capitalize on these new audiences. W/Bob & David was a chance for the pair and their old cast (including John Ennis, Jill Talley, Jay Johnston, and Tom Kenney) to realize sketches scuttled from the original run. One such idea is about Broadway production called Rooms: The Musical, dealing with a house where each room is alive (and sings) and conspires to bring a broken family back together. “In the old Mr. Show days, we could just never figure it out,” says Cross. “Then it just magically found its way.”

The new episodes are leaner, with less obvious effort put into those “links.” Where that flow of linked sketches played to a late-’90s cable format, the more developed sketches of W/Bob & David seem built for the Internet, where most fans come across bits.“It’s better for the audience,” says Odenkirk. “You can watch it and not have to take an Aspirin afterwards. Your muscles won’t ache. You can just sit back and enjoy the comedy.”

W/Bob & David seems poised to expose a whole new crop of sketch comedy fans to the comic sensibilities and profound talents of Bob and David and their rookery of regulars—just hearing Odenkirk say the words “ . . . but the creamed asparagus stole the show!” is painfully funny. It cements the Mr. Show legacy, connects early alt-sketch shows like The Kids in the Hall and The State to the new class of sketch talents. Call it the missing link.